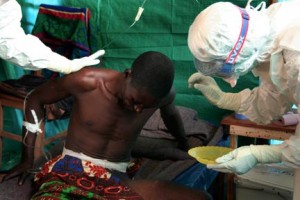 Doctors attending to a victim in Congo

A man who became ill on a flight from Liberia to Lagos has raised alarms for public-health officials after he later died of the virus. The Ebola outbreak has so led to more than 800 deaths in West Africa.

A Nigerian female doctor that treated a victim is said to be infected.

Liberia has closed most of its borders, and airports in Nigeria are now screening passengers arriving from foreign countries for Ebola’s symptoms, which include fever, headache, joint pain, lack of appetite, difficult breathing and sore throat. In its advanced stages, Ebola leads to diarrhoea, vomiting and internal bleeding. While the airport screenings are meant to ease travellers’ minds, the reality is that the Ebola virus can’t be detected soon after infection — the first signs of the virus are red eyes and a rash, which could be caused by many different things. Plus, outgoing flyers are not being tested and it’s unclear at this point if over countries will follow suit. People have recovered from infection with the virus, but the mortality rate ranges from 50 percent to 90 percent.

Who can spread the virus?

The virus takes anywhere from two to 21 days to incubate and start causing symptoms, but Dr Stephan Monroe, deputy director of the National Centre for Emerging and Zoonotic Infectious Diseases at the U.S. Centres for Disease Control and Prevention (CDC), said during a tele-briefing last Monday that infected patients only spread the disease when they have symptoms. Because the virus is transmitted through direct contact with fluids like saliva or blood from infected patients, airport officials are essentially looking for passengers who might have severe vomiting, diarrhoea or other bodily secretions that could reach other travellers.

Nigeria is screening incoming passengers for such symptoms and may also take passengers’ temperature. Nigerian officials have also created holding rooms to isolate patients or passengers who are suspected of being infected, so they can be triaged to further medical care.

But because some of the early symptoms of Ebola mirror those of other ailments, including malaria, CDC officials say the strongest way to contain spread of infectious diseases is by instituting travel restrictions at the source. That’s why Liberia has closed all its borders except for three land crossings where travellers can be screened and treatment services provided if needed.

Dr Marty Cetrone, director of the division of global migration and quarantine at the CDC, said during the briefing that officials can also try to contain the outbreak by using questionnaires asking travellers at these checkpoints about their recent travel history as well as their potential exposure to the virus through friends or other close contacts.

How did this outbreak get so bad?

Health officials aren’t sure why this particular outbreak has led to a historic number of deaths, but note that social and cultural practices may be driving spread of the virus. In many of the communities where the virus remains active, there is still denial about the disease, and stigma associated with getting ill, which discourages patients from getting early hydration and nutrition that can help them to overcome the infection. While there is no treatment for the virus, these measures can lower the death rate for some. Funeral practices that involve touching the deceased may also help the virus move from host to host.

How at-risk are Americans?

Monroe says the risk of Ebola for U.S. citizens who haven’t travelled to West Africa remains low. There are no restrictions on travellers entering the U.S., but the CDC has issued a Level 2 travel advisory for people traveling to Guinea, Liberia or Sierra Leone, recommending that they avoid contact with blood or other bodily fluids that might contain the virus, and use the proper protective equipment to avoid infection. The advisory applies mostly to health care or humanitarian aid workers, who so far make up the largest group of people affected by Ebola. “(Transmission) involves not only touching the contaminated body fluid but introducing it through some mucous membrane or cut on the skin,” said Monroe.

For anyone who has recently travelled to those countries or might have been exposed to someone who was ill in that area, health officials are advising a 21-day fever watch to ensure that no active infection is occurring.

What if an infected person flies into the U.S.?

The CDC is also preparing for the remote possibility that a passenger from the region who is ill boards a plane and lands in the U.S. and starts infecting residents. The agency is informing its network of physicians in state and local public-health facilities about how to look for signs of Ebola. “We are sending Health Alert Network notices about the importance of taking steps to prevent spread of the virus,” said Monroe. That includes procedures on asking patients about their recent travel history, as well as using the proper personal protective equipment, such as masks, gloves and gowns if they suspect an Ebola infection.

They’re confident that these measures will be effective, since infection with a virus related to Ebola, Marburg, was successfully contained in the Netherlands with isolation and barrier procedures. No health care workers contracted the virus from that patient. Health officials hope that with the proper preparation and education, that record can apply to Ebola as well, if it makes it beyond the heavily affected countries in West Africa.

Previous: GMO debate in Nigeria: The pros and cons
Next: Group demands $100b to restore, compensate polluted Niger Delta

The 10th outbreak of Ebola virus disease in the Democratic Republic of the Congo (DRC) ...