At the launch of the “Just Energy Transition in Nigeria” in Abuja on Thursday, June 29, 2018, Dr Godwin Uyi Ojo, Executive Director, Environmental Rights Action/Friends of the Earth Nigeria (ERA/FoEN), says that the initiative is aimed at pursuing efforts to provide a legislative backing by an Act of Parliament for improved renewable energy access to all 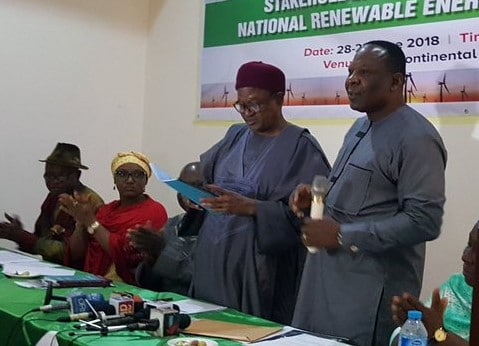 Because of carbon emissions released into the atmosphere, there is rising earth’s temperature leading to extreme weather conditions that is resulting in catastrophic events. This initiative is a call to action to all for a just energy transition in Nigeria that is in line with meeting also the Millennium Development Goal 7 on energy access for all.

A global response to climate change culminated in the Paris Agreement in 2015 to reduce carbon and situate development to 1.5 degrees and well below 2 degrees development pathway to reduce and avoid catastrophic events. Africa’s response to climate change has been a robust African Renewable Energy Initiative (AREI) to leapfrog the continent away from fossil fuel carbon economy to renewable energy sources.

Given the level of support from the industrialised countries, AREI plans to generate 10GW of renewable energy by 2020 and 30GW by 2030 if the finance and technology that is required is provided by the rich countries. At least, on paper, Nigeria has shown some ambitions to reduce its carbon emissions by 20% unconditionally and 45% conditionally by 2030 given the needed finance and technology by rich countries. However, one fundamental challenge facing the country is its oil-dependency hence the country lacks a blueprint to transit from fossil fuel driven economy to renewable energy alternatives.

Therefore, it must start by recognising that oil economy needs to end and to orient the economy by envisioning a post petroleum economy in its natural resource management. This manifesto launches Nigeria forward on the pathway to Just Energy Transition.

This understanding is currently lacking in government operations and citizen sensitisation in this regard has been lacking. The future we want is energy access that is clean, reliable and affordable, a healthy environment and decent green jobs. Hence, there is need for divestment from fossil fuel development to pave the way for decentralised energy systems in mini-grids, off-grids and non-grid systems in ways that individuals and communities participate as Prosumers (producers and consumers) in the energy production, and supply chain as well as share in the benefits.

A Just Energy Transition in which climate and energy solutions become available to everyone, in which climate costs and benefits are shared in a fair way, between rich and poor, citizens and firms. For Nigeria, some thousands of jobs to be affected should be replaced by at least two green jobs generated. Nigerians need to engage and discuss issues such as who will pay for the just transition and how will it be paid for? This manifesto innovatively kick-starts the debate towards the elements of the transition as a process and the need to engage with citizens on the subject.

The Nigeria government needs to urgently:

It is time to leave the oil in the soil. It is time to envisage a post petroleum economy. Nigeria can transit to become the hub of renewable energy development for Africa, but it cannot do this unless urgent concerted actions are taken. We call on civil society groups, policy makers, academics, state and non-state actors to embrace renewable energy. A just energy transition is expedient: the need for climate solutions, equality and decent jobs for all in Now. What do you want? Climate Justice. When do you want it? Now!

Like Loading...
2018-07-01
admin
Previous: Social media’s role in climate change communication
Next: Shoprite to remove waste in communities in Nigeria, eight others