He established the Agricultural Training Institute in Epe between 1989 and 1992 to train young school leavers who wanted to take up entrepreneurship in Agric farming. Dr Animashaun also holds HND and MSc. in Tropical and Sub-tropical Horticulture (Applied Science) from Writtle College University London, and a B.Sc Agriculture from Fargo, USA, Horticulture and many certificates on Horticulture. He spoke with Abdallah el-Kurebe on tomato and many more. Excerpts: 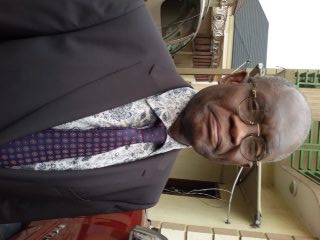 Presently fruits and vegetable farms in Nigeria have the challenge of holocaust of Tuta Absoluta, locally known as tomato Ebola. From your profile, you have experience as a consultant on post-harvest pathology on fruits and vegetables.  Can you explain in a simple language what Tuta Absoluta is, how it attacks vegetables and precautionary measures needed to stop its spread before the solution arrives?

Tuta Absoluta is an intelligent insect that has a distinctive survival instinct. It is a pest that destroys tomato crops and it has been prevalent in this country for 50 years, but which was just discovered a few years back. The attention is just coming up now because of the intensity of the attack that is being experienced. It is a soil born pest. Tuta Absoluta (Meyrick), is a micro lepidopteran moth belonging to the Gelechiidae family and is considered as one of the most devastating pest that feeds on tomatoes, garden egg, aubergine, potatoes, and tobacco plants. Tuta Absoluta pest spreads very quickly because it has a high reproductive potential and a life cycle that can take between 24 to 76 days, depending on the environmental conditions. Adults are silvery gray with black spots on the forewings. Their activity is concentrated in the early morning and dusk; during the rest of the day they remain hidden among the leaves. Adult lifespan ranges between 10 and 15 days for females and six to seven days for males. The female lays the eggs mainly on the leaves, although they can also be found on stems and sepals. Eggs are laid isolated, thus facilitating their distribution on the crop. The number of eggs per female is usually between 40 and 50 and may reach 260.

This is just a nominal description of Tuta Absoluta and I think we need to deploy different approaches to solving the problem. First is the approach of attacking the insects itself at the reproduction stages from the egg to adult. It’s not about attacking at the point of attack, but killing the egg before hatching – that is completely wiping it off from our farm land nationwide. We need an Entomologist report to identify the specie of the pest, because it’s possible that the specie that can survive in Kano and Kaduna might not survive in Jos and Yola because of the varied temperature. That means we have to develop many strategies and approaches. Another approach is to identify which stage of the lifecycle that attacks and infects the fruits either the larva, pupa or the adult state. Because I know that it’s a moth that reproduces twelve times a year and it can be terminated before it matures to age that attacks the fruit. The third is the pesticide method: though some experts have suggested the use of pesticides, we have to be very careful, some pesticides are systemic, you intend to control the insects but the tomatoes can take it up and when eaten fresh can be carcinogenic and cause harm to the human body.

What is the meaning of carcinogenic?

That means cancer; it causes cancer in the body – so we have to be very careful. An expert from the Ministry of Agriculture suggested that they use the protocol of insecticide, which means once you use one insecticide today, tomorrow you use another one. This is dangerous because it means the insect is developing a resistance to that protocol. Another approach is the biological approach – that is, finding parasites that feeds on the insects, Tuta Absoluta. We have to have a different approach to this rather than the normal insecticide approach.

If you are getting the parasites to feed on them, how then do you bring a contact?

You have to study the lifecycle of that insect and know the stage it attacks the fruits; send the parasite during this stage to kill it completely and study the parasites so that it would not be injurious to the plant. So, you can see it’s a two-way approach so as not to bring about another problem to the plant itself.

What in your view should the government do to have an all-encompassing proactive approach to protecting our food and crops?

One thing we lack most in crop harvest in this country is post-harvest technology, management and packaging. These are very essential and important in any nation’s agricultural growth. It is what gives the developed economy edge over us. They believe in technology a lot and they spend money on research. You cannot import a technology that was designed for a country with a different climate to a country that has a very strong climate. I am an ardent preacher of environmental reality. Any problem in this country has its own solution here and not a borrowed solution. Borrowed solutions might only solve the problem temporarily.

I am unequivocally saying that I can solve this Ebola tomatoes outbreak locally. This I can do in synergy with other indigenous plant protection experts. I did my Doctorate degree thesis on this post-harvest pathology. I spent every day of my life for six years doing research on different fruits and vegetables pathology. I don’t need to go to heaven with dollars or pounds to solve these outbreaks. We are blessed in this country with world class brains. As a Nigerian, I won the best oral presentation at the 2nd All African Horticulture Congress (AAHC) ‘Horticulture for Humanity’in Shukuza, South Africa. In January 2012, I was presented the Best Student Presenter where we had participants from all over the world. So, why should a foreigner import his country technology that has zero percent of my country’s environmental component? It cannot work. I think we should look at the post management of these crops, study the physiology of the crops and know when it is mature. Our own culture here is that we eat ripened products. The right practice is to harvest the crop that is physiologically matured and subsequently transferred to a cold room with a specific temperature suitable for the crop.

At what stage should that be?

For example, the tomato has six stages. It is harvested in the second stage, which is the green crop stage. Then it is put in the cold room at a temperature not more than 13 degrees centigrade or else the crop would have chilling damage. Every fruit contains a gas called endogenousethylene, (ethanol), which is injected too: it hastens ripeness in tomatoes and gives you a very good fresh tomato. Ethylene is a hydro carbon compound obtained from butane and or propane.

Has ethylene no side effects on humans?

No it doesn’t. It is a gas and is used for ripening process. It also increases the shelf life of fruits.

You said that your grand mission is to develop a value chain system for horticultural crops, fruits and vegetables in Nigeria. I believe it is important for our local food security. How do you intend to achieve this in this system?

We have a collaborative arrangement with a sister institution in the UK. We have a post-harvest unit that is very involved in researches and tests for most fruits and vegetables for supermarkets in the UK. These include Tessco, Sainsbury, Waitrose, Marks and Spencer and other major big supermarkets. We carry out the palatability test, aroma, flavour and acceptability by consumers of all these products that come to UK and we send our analyses and results to them. However, I am now back to establish a similar thing in Nigeria where we have post-harvest unit in some of our institutions. In Lagos state especially where we have land constraint, there are areas where we can locate containerized cold rooms and offer post-harvest management and packaging of these crops. This will help them to retain their original freshness and increase their shelf lives and that is why we have the value chain from the farm to the table you have it fresh.

The peasant farmers who are the major producers of tomatoes in Nigeria how do think they can afford the cold room facility.

They can form a co-operative society and have a common cold room where companies can buy from there and do all the marketing and other necessary things like post-harvest treatment on their own. The farmers would bring their products, at that stage we call them contract farmers. You give specifications, at this stage you plant and harvest and you bring them to the warehouse not far from the farm.

In London where you studied and lived they practice mechanised farming, most of our farmers are peasant farmers. What do you think should be done here given our low technological level?

We have got to a situation where the world is now a global village. Now we practice rain-fed agriculture as well as open field crop production. Horticulture is not like that. You have greenhouses protecting horticultural products. For example, you can have three tomatoes growing under green houses.

So how can you develop these protective technology?

You have some companies that have greenhouses of short span. You can even drip feed them by using drip irrigation technology and putting the right amount of fertilizers in the solution with the right amount of water. Consequently, you get good yield from the crop.

Can you eradicate this menace totally, especially that the government is preaching patronage of indigenous companies to reduce the further depletion of our foreign reserve? What do you think you can do, realistically?

I read that the Honourable minister for Agriculture said that they have contacted Agronet over the issue and that they are going to provide chemicals to combat it. The long term approach is what I stated earlier – study the life cycle in all the entomologists. That is the long term plan to eradicate it totally. The immediate control is the use of chemicals, which I said is not a sure bet.

The five states affected by the outbreak include Kaduna, Katstina, Kano, Jigawa and Nassarawa. The disease has also spread to Lagos, Oyo and Ogun state. What is your proactive prevention control method to avert it from spreading to other states?

We have to do the right thing by being very professional and ethical. Let’s do an entomology test on the different species and use the right approach from the result; to contain it so that there won’t be another outbreak in future and so that we don’t engage in the usual fire brigade approach that is always palliative in nature.