Activist Nnimmo Bassey (who is Director, Health of Mother Earth Foundation – HOMEF), in a reaction to a recent statement by an official of the National Biotechnology Development Agency (NABDA) and Open Forum for Biotechnology (OFAB), insists that GMOs depend on toxic agrochemicals, are not friendly to soils and ecosystems, and thus are a threat to food security 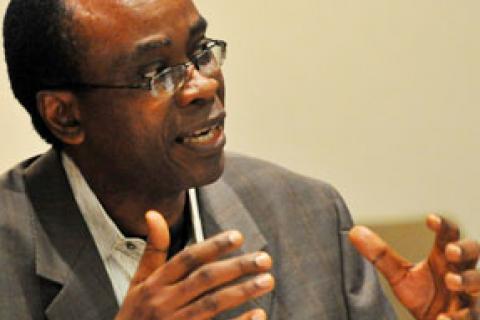 Some of the comments made by Rose Gidado as reported under the title, Nigeria Not At Crossroads Over Food Security – Agency Chief (published in The Guardian on 8th July 2016) must be based on questions that were not accurately posed to her. It could also be that her comments were based on faulty reporting she got from persons who may have been at the conference she referred to. She may not have been at the conference under reference because neither Health of Mother Earth Foundation (HOMEF) nor African Faith and Justice Network (AFJN) had invited her to the conference.

As an Assistant Director at National Biotechnology Development Agency (NABDA) and as the coordinator of Open Forum for Biotechnology (OFAB) in Nigeria, she has links to two institutions that have as their mandate the promotion of GMOs and placement of their products in the Nigerian market and on the dining tables of citizens of this country. Some of us have queried the place and role of NABDA on the Governing Board of the National Biosafety Management Agency (NBMA) – an agency set up to regulate the activities of GMO promoters in the country. The place of GMO promoters on the board of a regulatory agency raises questions of conflict of interest as already evidenced by their teaming up with Monsanto Agriculture Nigeria Ltd to apply for a permit for confined field trials of Monsanto’s GMO maize, to which assent was given in record time of less than two months from the date the application was advertised for comments from the public.

The comment at the conference under reference that modern biotechnology can be compared to a cowboy technology was made by me. This was an allusion to the use of “gene guns” in the process of insertion of the genetic materials that the technologists may have prepared. As with any shooting activity, it does happen that at times the genetic engineers shoot off target. At other times when they hit their desired target they can not really be so sure of what the outcome would be. One top GMO promoter said recently that GMO cotton failed in Burkina Faso because of insertion of the genetic material in a wrong germplasm. This was said on television and confirms that genetic engineering is not as precise as the biotech industry would want us to believe. It is a technology searching for problems and feeding fat on false promises and hype.

It should also be noted that the insertion of genetic materials from fish into GMO tomato is not a fictional tale. A biotech company, DNA Plant Technology of Oakland, California, actually put the fish gene in a tomato. The GMO tomato was discontinued because of the public uproar that followed its creation. See the story at The Monsanto GMO Story: Adding a Fish Gene into Tomatoes.

ALSO READ:  Germany pledges up to €340m in farm aid after drought

The notion that GMOs are part of a safe technology “needed to achieve developmental strides in economic diversification, food security, improved health systems, cleaner energy, job creation, wealth generation and poverty reduction, Nigeria” is contestable. Agricultural modern biotechnology poses peculiar problems to any environment. No wonder the industry survives largely through their political clout and by the open door policy they have with regulators that are at the same time promoters.

The fact that tampering with nature has impacts on religious, social and cultural sensibilities cannot be denied. Neither should it be described as unfortunate. It is the reality. Applied science must be alive to these sensibilities because science must be in the interest of society. And, in any case, we cannot be bullied into silence by the claim that science is neutral.

Science may be right when it says that every living thing can ultimately be broken down to carbon, for instance. Perhaps the basic building blocks of our bodies are similar across species. But some persons may not feel happy to have genes from a pig inserted in rice, for instance.

The fact that science is often not neutral is very much illustrated by goings on in research on genetic engineering, including new areas such as synthetic biology, gene editing and gene drives. Critical scientists continue to be hounded out of jobs or into silence. Those who dance to the tunes of the biotech industry and their political backers flourish on the other hand.

The GMO cotton and maize varieties for which permits have been issued with the active support of NABDA and OFAB pose special risks to our environment. One reason we worry is that the crops are all engineered by Monsanto to withstand their weed killer Roundup of which a key constituent chemical is known as glyphosate. Just like debates raged on whether other toxic chemicals were safe, the debate is on concerning glyphosate. The World Health Organisation (WHO) said that glyphosate is probably a carcinogen, based on research carried out by its (WHO’s) research arm and later became more ambivalent. However, the researchers affirm that they stand by their findings.

GMOs do not necessarily yield higher than natural crops. They promote monocultures and will promote land grabbing and thus displace and impoverish small scale farmers. GMOs depend on toxic agrochemicals that are not friendly to soils and ecosystems. They are a clear threat to food security.

No matter what NABDA, OFAB and NBMA say, Nigerians have solid reasons to worry about the opening of the doors of our agriculture and food systems to risky technologies.