How gender influences understanding of climate change, by study

November 20, 2018 Comments Off on How gender influences understanding of climate change, by study 550 Views

While political views play a strong role in Americans’ opinions on climate change, there are many other individual, social, and cultural factors that influence public understanding of the issue. The Centre for Climate Change Communication of George Mason University in the US explores how views on climate change differ between men and women 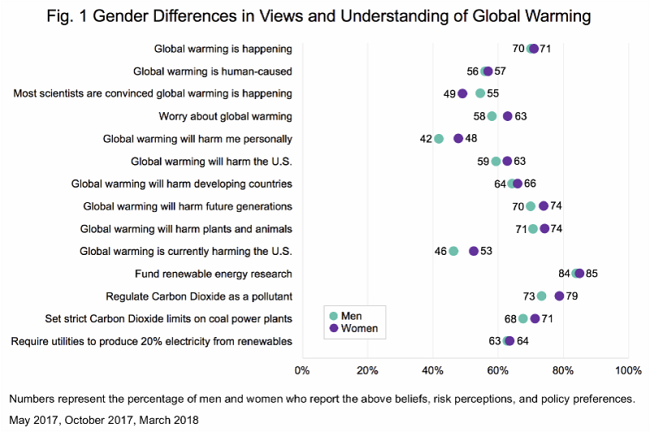 A large body of research shows a small-but consistent-gender gap in environmental views and climate change opinions. On average, women are slightly more likely than men to be concerned about the environment and have stronger pro-climate opinions and beliefs. Scholars have proposed several explanations for this gender gap, including differences in gender socialisation and resulting value systems (e.g., altruism, compassion), perceptions of general risk and vulnerability, and feminist beliefs including commitment to egalitarian values of fairness and social justice. Some researchers also note that some of the strongest gender differences are found in concern about specific environmental problems, particularly local problems that pose health risks.

In our research, we find that, although a similar proportion of men and women think global warming is happening and is human-caused, women consistently have higher risk perceptions that global warming will harm them personally, and will harm people in the U.S., plants and animals, and future generations of people (Fig. 1). Also compared with men, a greater proportion of women worry about global warming, think that it is currently harming the U.S., and support certain climate change mitigation policies, specifically regulating CO2 as a pollutant and setting strict CO2 limits on coal power plants. 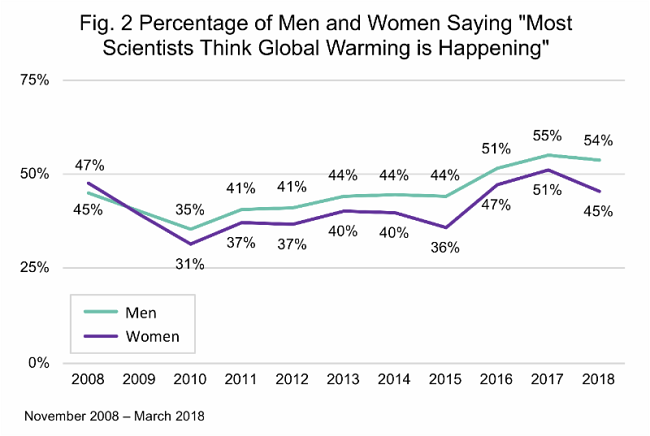 Women are less likely than men, however, to say that most scientists are convinced that global warming is happening. The gender gap in this form of knowledge has remained generally stable since 2010, although men’s understanding of the scientific consensus has improved over time (see Fig. 2). This is a surprising finding given that women are more likely than men to view climate change as harmful.

We also found knowledge gaps between men and women in our 2010 research on Americans’ knowledge of climate change. In this research, we assessed public understanding (and misunderstanding) of climate change in detail. For example, respondents were asked about their knowledge of fossil fuels and which types of gases trap heat in the Earth’s atmosphere. After grading scores on the test, we found that, on average, women scored lower than men in scientific knowledge on climate change (Fig. 3). A greater proportion of women received a “D” or an “F” and fewer got an “A” or “B” than did men. 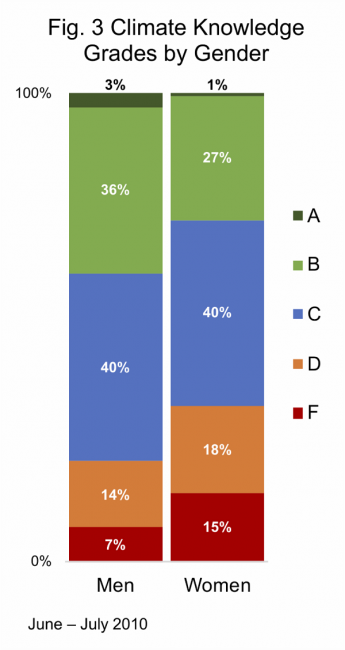 Women were also more likely than men to express uncertainty about a variety of questions. For instance, respondents were asked how much several factors contribute to global warming (e.g., deforestation, nuclear power plants, burning fossil fuels, the sun, cars and trucks). Across many of these questions, a greater proportion of women said “don’t know” than did men (see Fig. 4). Women were also more likely to misunderstand some facts; for instance, a greater proportion of women said that acid rain and the ozone hole contribute “a lot” to global warming. Women and men were similar, however, in their knowledge on the burning of fossil fuels, which is the primary source of greenhouse gas emissions causing global warming.

Taken together, these results suggest that women in the U.S. are less likely than men to know certain scientific facts about global warming and tend to be less certain of what they know, even though they have a more accurate understanding of the risks and threats from global warming. This might suggest that, compared with men, women will be more open to fact-based public education initiatives because they might be less threatened by the facts (as long as the information is consistent with their risk assessments). 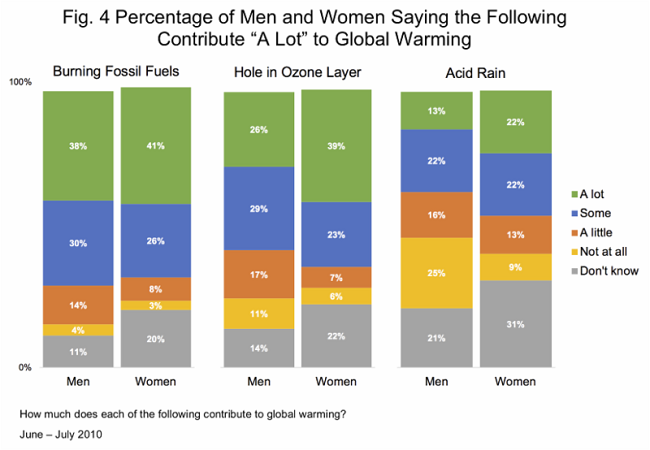 Closing gender gaps in knowledge and understanding of the problem, therefore, ought to receive more attention in climate education and outreach efforts to further engage and empower women in climate issues. This is especially important because women are more likely than men to be harmed by environmental problems like climate change-both nationally and globally. In a recent BBC News Science & Environment article, U.N. data show that globally women make up 80% of people who are displaced by climate change. Because women in many countries tend to have roles as primary caregivers and food providers-and tend to have less socioeconomic power than men-they are more vulnerable to climate problems including natural hazards like flooding, droughts, and hurricanes. In the U.S., for instance, the Institute for Women’s Policy Research reported that 83% of low-income, single mothers did not return to their homes in New Orleans after Hurricane Katrina hit in 2005. In terms of public health, air pollution is considered a leading threat to pregnant women and their babies-to-be.

Women play an essential role in responding to climate change. In fact, out of 100 substantive climate solutions identified through rigorous empirical modeling, improving the education of women and girls represents one of the top solutions (#6) to reducing greenhouse gas emissions that cause global warming-similar in ranking to restoring tropical forests and ranking above increased solar energy generation. Women in leadership positions can also foster climate policy solutions. A study on gender equality and state-level environmentalism found that, across 130 countries, women in government positions were more likely to sign on to international treaties to reduce global warming than men. Promoting the participation of diverse women in leadership positions, as well as in climate science, can also inspire young women to participate.