President of Togo, Faure Essozimna Gnassingbe, has commended the Eko Atlantic City project on the technique adopted towards providing what he terms “a permanent solution” to coastal erosion on the Lagos shoreline. 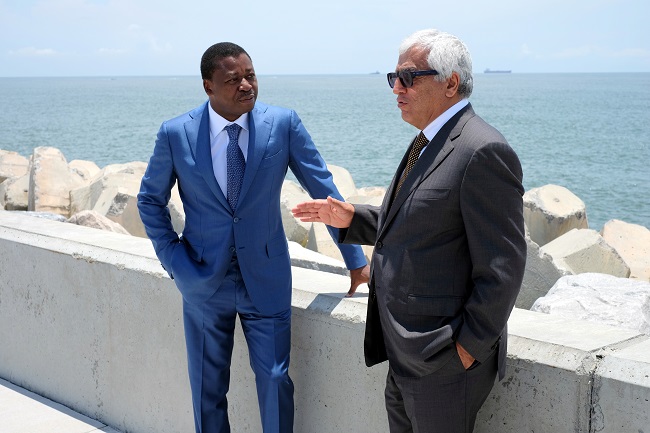 He gave the commendation on Friday, September 21, 2018 during a tour of the ongoing project in the company of Mr. Ronald Chagoury, Chairman of South Energyx Nigeria Limited, developers of the estate.

Gnassingbe, who reportedly pays attention to the issues of fight against global warming and protection against coastal degradation in Africa, said: “Like Victoria Island, seaside communities along Togo’s coast and in many African countries have long lived with the consequences of erosion from the Atlantic Ocean. However, with sustainable solutions and innovative partnership with private sector we can tackle coastal erosion and bring an end to this environmental issue.”

Coastal erosion, a menace experienced in West Africa and beyond, including Nigeria and Togo, has been an on-going problem for hundreds of years impacting the lives of millions of Africans, according to observers.

South Energyx Nigeria Limited however claims that Eko Atlantic City “has proven to be a sustainable solution to this threat with the construction of a great sea revetment known as the ‘Great Wall of Lagos’, which was constructed soon after the collapse of Bar Beach in 2005.”

Its construction, adds South Energyx, was said to be an urgent action required to protect the shoreline of Victoria Island and Lekki and the potential loss thousands of lives, homes, businesses and vast areas of developed land.

Speaking during the tour, Chagoury stated: “Eko Atlantic City came up as a solution to address the erosion that was fast destroying the coast of Victoria Island and its environs. We recognised that an urgent step had to be taken to protect the shoreline of Victoria Island and reclaim the land that had been lost.

“As a result, the Eko Atlantic City project came up as a permanent solution to the coastal erosion of Victoria Island and parts of Lekki and we have ensured this through the construction of the ‘Great Wall of Lagos’.

“In fact, this endeavour has not only stopped erosion, it has created a smart city, a financial hub and has united us with our neighbours to come together in the fight against on-going coastal erosion.

“With Eko Atlantic City in place, thousands of lives, homes, businesses and vast areas of developed land in Victoria Island, Lekki and other areas have been saved from the wrath of the Atlantic Ocean. Approximately 6.5 kilometres of a total of 8.5 kilometres of the ‘Great Wall of Lagos’ has been completed. This wall will continue to protect Victoria Island and parts of Lekki from erosion.”