He may not survive this.

Harry squeezed his shirt into his nose, trying to avoid breathing in too much of the rotting fish that was his current affliction. Not that it helped much. Not when he himself smelled like dead fish.

Harry looked up and around, his face scrunched up in worry, sweat visibly trailing down the sides of his face. He knew this feeling all too well. He’d woken up with it; that helpless feeling that today was just going to be another fruitless day of harvesting dead, rotting fish like offerings on a platter.

It was just that these weren’t offerings. They were more like a curse. Or a nightmare he couldn’t wake up from no matter how hard he tried. And by God, did he try. He woke each day hoping that it would be better than the previous, inching deeper into the ocean waters in his simple boat in the hopes of a big catch. Or even a normal catch; the type he used to get. But all he came back with now were the dead fish vomited up by the ocean, a cruel omen they could neither escape nor understand.

“If I enter pass here, e go dey dangerous o.” This was his daily internal conflict; toeing the line between merely surviving and living. But in the end, even he wasn’t sure if he cared about danger anymore.

Not when there was so much at stake—not when it meant risking another fruitless day catching nothing but already rotten fish. Not when it meant going back to witness his wife and children’s eager expressions crumble right before his eyes one more heart-breaking time. He couldn’t afford another fruitless day. Not this time. Not when a state-wide lockdown was being imposed upon them due to this global viral pandemic that was apparently taking lives in the millions. He didn’t know how he and his family would survive it with nothing but rotten fish and no source of livelihood. He didn’t know how his community would survive this time.

The community was slowly wasting away, and they along with it.

In the beginning, when they woke up to the obscene amount of dead fish dotting the coastline, Harry had been excited. He didn’t think about the reason why so many fish died overnight; all he had cared about then was the fact that the fish had come to him. But that excitement was short lived.

The fish rotted at an alarming speed and, in the end, they were useless. The rot set in under thirty minutes, and if they weren’t fast enough, the dead fish became putrid and their day ended in loss. It was then, that he’d started to wonder why.

Why were the fish dying in such great numbers and stinking up the coastline with the smell of death? No one had a clue what the reason was. But they had their opinions, and everything pointed to the diverse oil companies planted on their land, destroying it just so they could mine oil upon oil without thoughts of ever giving back to the communities they were invariably destroying one mine at a time.

Harry’s jaw ticked, and his hands clenched into fists as his thoughts turned to the mega oil rigs stinking up their waters. What made him even angrier was the way they wouldn’t accept the responsibility for this deadly infestation. Heh, it wasn’t as though they took responsibility for anything in the first place. Harry wished someone would take responsibility for this. If not, then at least, tell them what they were up against. Was it a natural or supernatural attack? Harry was desperate to know how to fight this outbreak, desperate for everything to return to normal.

That was all he hoped for before he went to bed at night, and when he woke in the morning; that this nightmare would vanish the same way it came. That the next day, when he cast his net to fish, it would catch healthy fish, and not drag in the sickening multitude of fish already long dead and rotten.

It was clear that he hoped for too much. And nothing was ever going to be normal again. Not for him or his family, or his community.

He was stuck between his very limited options, swaying back and forth between them, his eyes watery from the extremely pungent smell of fish that seemed to sink into his very being.

They were rotting along with the fish, each and every fisherman that scoured this coast hoping, each and every day, that it would all go away. He was rotting too – from the hunger and the insecurity of it all, from the inside out.

The hopeless options that twisted like little arrows inside him every day sought to burrow even deeper until he was sure his heart would implode on itself. Should he run the risk of rowing further into the water or turn back and hope upon hope that at least some of the dead catches remained usable by the time he reached the shore?

Both options were equally dangerous, and each time, he struggled to pick the one that would help him survive in the end. Yet, at this point, he was already at the end of his line, and he didn’t think there was any left to toe around.

In that moment, just staring into the waters, Harry realized that he was almost at the end of everything. At the end of his very life as he knew it. Looking down at the heaps of fish lying limp in his boat, he realized the futility of each day, each moment he spent hoping and hoping. And hoping.

He’d once heard that hope was what kept a person alive, but it looked like he was the exception to that rule. Because this hope? This hope that anything would change? It was slowly killing him until he couldn’t bear to hope anymore. Until he didn’t want to hope.

What was the point? There was nothing that he could do to change this fate. Nothing none of them could do but keep scouring the waters for living fish that were all but abundant because the pungent smell of dead fish in the waters and on the coastline seemed to keep them away.

And even if he did catch some fish, it wasn’t as though he would make much of a profit from it anyway. The government had banned them from selling or eating the dead fish, and the little healthy ones they did catch, they couldn’t even sell them at full price anymore due to the government ordered interstate travel bans and decreased demand for their products. Whatever he did manage to gain would never be able to cater for his family in the coming period of forced lockdown in the towns and communities.

It was an option he couldn’t escape, especially now when he couldn’t go back empty handed. To do that would be suicide.

Harry froze at the thought. Hooked. It was an option he hadn’t known he even had or would have even considered at all.

But in that moment, he was the fish, hooked on the bait of that thought, and he couldn’t shake it off.

This was the end of the line for him. It looked like what remained for him was to sink. To let go and deliver his weight to the grieving waters. If he couldn’t go back empty handed, wouldn’t it be better if did not go back at all?

He didn’t think he would even make a difference to the seething body of water. He leaned forward, drawn to the sparkling ripples, sunlight bouncing off the flowing surface like dancing ghost lights. Intriguing him with their fluidity. Would the ocean accept him? Or would it spit him out on the shore, unsatisfied with his sacrifice?

Or was it cowardice?

And for a split second, his family flashed before his eyes; the worried and resentful gaze of his wife, and the disappointed and hungry stares of his children. He wondered if it would make a difference to them. If he became like one of the fish dotting the coastline, lifeless from some mysterious causes.

Harry leaned back and let out a fearful breath. Of course. Of course, it would make a difference to them. He was here because he couldn’t afford to see them starve but he wasn’t running away from them. If he could return to these barren waters, day after day after day, because of them, then it wasn’t because he was running from their despair. Instead, he was trying his possible best to wipe it away completely.

He realized how close he’d been to surrendering to his own fear and selfishness and letting the weight of his own despair sink him until nothing left of him would ever be found.

Harry picked his second option without hesitation, quickly picking up his oars and rowing with a single-minded focus for the shore. And he decided that he would continue to hope, even if it killed him. He would continue to hope that when he woke up tomorrow, things would be better. Back to normal. That at least some of the fish he’d caught today would still be salvageable by the time he reached the shore.

It was true that he might not survive this, that he’d almost let the fishes bait him into sinking.

But at least, today, he was still a fisherman. Even if the ocean wanted nothing to do with him.

“Hook, Line, Sinker” is extracted from “A Walk in a Curfew and other Pandemic Tales”, a 2020 publication of HOMEF

Previous: WHO roots for equitable access to COVID-19 vaccine in Africa
Next: 22 schools in France closed due to coronavirus pandemic 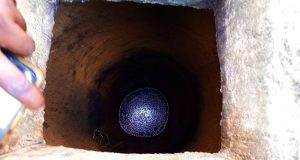