Flooding from Tropical Storm Harvey is overburdening resources in the US as authorities in and around Houston in Texas scramble to save those trapped by the high waters. 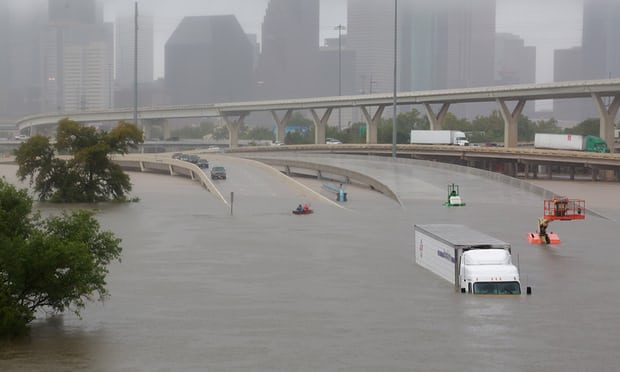 Vehicles are stranded as road network is flooded

Hopes for an immediate respite from Harvey’s wrath seem unlikely as the National Weather Service calls the flooding “unprecedented” and warns things may become more dire if a record-breaking 50 inches of rain falls on parts of Texas in coming days.

The rainfall threatens to exacerbate an already dangerous situation, as Harvey’s rains have left many east Texas rivers and bayous swollen to their banks or beyond.

“The breadth and intensity of this rainfall are beyond anything experienced before,” the weather service said. “Catastrophic flooding is now underway and expected to continue for days.

The storm killed two people in Texas, authorities said, and the death toll will likely rise. More than 1,000 people were rescued overnight, and Houston Mayor Sylvester Turner warned that some 911 calls are going unanswered as operators “give preference to life-threatening calls.”

Here are the latest developments: