‘Over half of world’s primate species threatened with extinction’

November 24, 2015 Comments Off on ‘Over half of world’s primate species threatened with extinction’ 1,423 Views 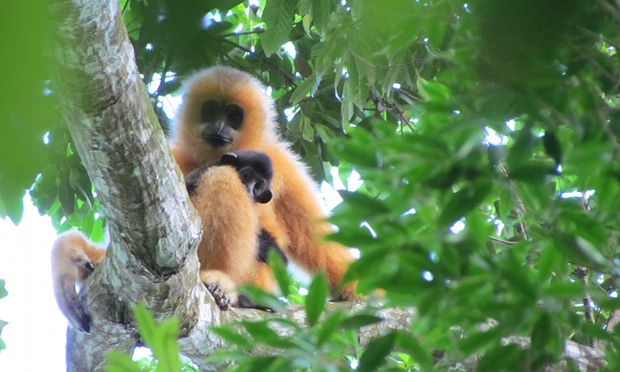 Only 25 individuals of the Hainan gibbon (Nomascus hainanus) are thought to be left in the wild. Photo credit: theguardian.com

Only 25 individuals of the Hainan gibbon (Nomascus hainanus) are thought to be left in the wild, confined to a small patch of rainforest on Hainan island in south China. Similarly, around just 50 of Northern sportive lemurs (Lepilemur septentrionalis) remain in their native Madagascar.

This about sums up the plight of 25 primate species believed to be critically endangered.

Compiled by 63 experts from across the world, the report of the world’s 25 most endangered primates was launched at Singapore Zoo on Tuesday, November 24, 2015 with guests from national and international conservation and research organisations.

It is the latest edition of ‘The world’s 25 most endangered primates’ report, which is updated every two years.

The main threats to primates are habitat destruction, particularly from the burning and clearing of tropical forests – which results in the release of greenhouse gases causing climate change – the hunting of primates for food, and the illegal wildlife trade.

“The world’s primate species are at great risk with more than half of the species threatened with extinction on The IUCN Red List,” says Simon Stuart, Chair IUCN Species Survival Commission. “We are currently re-assessing all primates and there is great concern that the situation may be getting even worse for many of these iconic and important species. Locally implemented projects to protect the Northern sportive lemur and Alaotra gentle lemur were announced in October by SOS – Save Our Species – an initiative managed by IUCN, yet much remains to be done for other species.”

The list, which has been drawn up by primatologists working in the field who have first-hand knowledge of the causes of threats to primates, includes five primate species from Madagascar, five from Africa, 10 from Asia, and five from Central and South America, all of which are in need of most urgent conservation action.

“This research highlights the extent of the danger facing many of the world’s primates,” says Dr Christoph Schwitzer, Director of Conservation at Bristol Zoological Society and a world-leading primatologist. “We hope it will focus people’s attention on these lesser known primate species, some of which most people will probably have never heard of, such as the Lavasoa Mountains dwarf lemur from Madagascar – a species only discovered two years ago – or the Roloway monkey from Ghana and Ivory Coast, which we believe is on the very verge of extinction.”

“Some of these animals have tiny populations remaining in the wild and support and action to help save them is vital if we are to avoid losing these wonderful animals forever.”

Madagascar and Vietnam both have large numbers of highly threatened primate species. In Africa, the genus of the red colobus monkeys is under particular threat, as are some of the howler monkeys and spider monkeys of South America. All of these species are relatively large and conspicuous, making them prime targets for bushmeat hunting.

“The purpose of our Top 25 list is to highlight those primates most at risk, to attract the attention of the public, to stimulate national governments to do more, and especially to find the resources to implement desperately needed conservation measures.” says Dr Russell Mittermeier, Chair of the IUCN/SSC Primate Specialist Group and Executive Vice Chair of Conservation International “ In particular, we want to encourage governments to commit to desperately needed biodiversity conservation measures.”

“What is more, beyond the great scientific interest of primates, there is increasing evidence that certain species may play a key role in dispersing the seeds of tropical forest tree species that have a critically important role in mitigating climate change – a particularly noteworthy consideration given the upcoming conference of the parties of the climate convention in Paris.”

“This report makes scary reading for primatologists and the public alike, and highlights where we as conservationists must focus our attention over the coming years.” says Dr Schwitzer. “However, it also demonstrates the growing importance of collaboration between the international conservation, research and zoo communities in the protection of species and habitats.”

“At Bristol Zoological Society we will continue our conservation and research with the aim of increasing the effectiveness of the conservation activities, as well as increasing our understanding of these, and other, Critically Endangered species.”