The Global Water Partnership of West Africa (GWP-WA) in collaboration with the Economic Community of West African States (ECOWAS) organised in Bamako, Mali, the regional kick-off meeting of the “Programme on Advancing Dialogue and Investment for Food Security in Water-Energy-Food-Ecosystems Nexus in West Africa”. 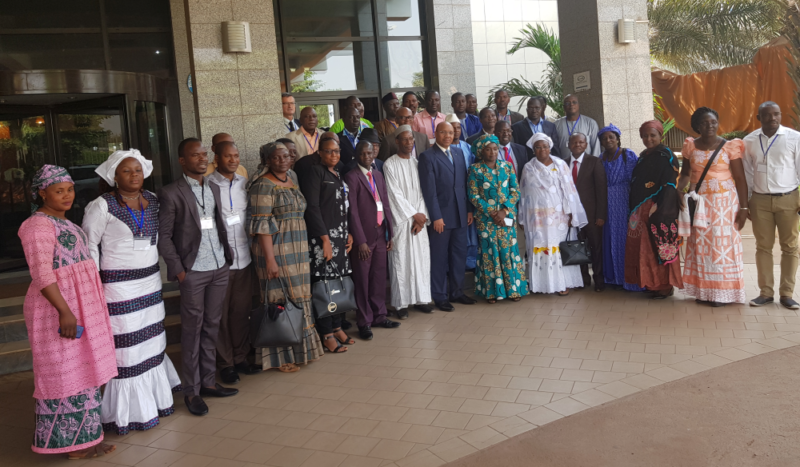 Participants during the official closing of the event

Among attendances to the meeting were the Executive Director of the Volta Basin Authority, representatives of other basin organisations, Niger Basin Authority (NBA) and Gambia River Authority (OMVG), regional organisations such as Water Resources Coordination Centre (ECOWAS/WRCC), CILSS, African Network of Farmers and producers (ROPPA), representatives of targeted counted of the pilot phase, Mali, Nigeria, Burkina Faso and Benin, Country Water Partnerships, the Chair, members of the Technical Committee and the GWP-WA Executive Secretariat.

The meeting was co-sponsored by the Minister of Water and Energy and the Minister Commissioner for Food Security of Mali. At the opening ceremony, Mr. Malick AlHousseini, Minister of Water and Energy, said that “we salute and appreciate this initiative of the Global Water Partnership (GWP) with its partners, which is of great importance for our countries”. He concluded by urging GWP-WA and ECOWAS so “that the initiative be intensified and extended to all ECOWAS countries in order to remain in harmony with the framework for the implementation of the SDGs, which insists on the principle of “leaving no one behind “.

The Chairman of the GWP-AO, Professor Amadou Hama Maiga, recalled that “given the interaction between agents and factors of economic development, it is now agreed to adopt the Nexus approach in development processes, and as far as food security is concerned, it is the Nexus “Water-Energy-Food-Ecosystem”.

The meeting, which took place over three days, allowed, among other things, the clarification of the Nexus concept and its link with IWRM, the declination of opportunities to ensure food and nutritional security in West Africa, the presentation and exchanges on the development process of the regional and country programmes. The regional partners ECOWAS/WRCC, NBA, VBA, OMVG, CILSS and ROPPA made presentations on the policies, strategies, plans, programmes and projects implemented or under development relating to the Water-Energy-Food-Ecosystem sectors in the region. These presentations highlighted the efforts that are being made to integrate the Nexus into the various national and sub-regional initiatives. Successful discussions allowed the partners to express their commitment to the initiative.

It is important to remember that West African countries are faced with ever-increasing demands for food, water and energy, a challenge compounded by climate change. To date, the sectoral approach has been at the centre of policies in the region and in countries that do not always take into account the interconnections and interdependence between the three sectors.

Ensuring the food and nutritional security of populations and their effective adaptation to climate change requires moving towards efficient and sustainable integrated use of land, water, energy and other vital resources; and better coordination of efforts to maximise synergies.

Therefore, the concept and approach of Water-Energy-Feeding-Ecosystem Nexus was adopted to promote efforts to better understand the interconnections between these sectors on the one hand, and the relationship between the Nexus concept and adaptation to climate change on the other. The Nexus approach recognises that energy security, food security, water security and ecosystems are inextricably linked and that actions in one sector are likely to have impacts in another sector or sectors.

The launch of the “Programme on Advancing Dialogue and Investment for Food Security in Water-Energy-Food-Ecosystems Nexus in West Africa s Nexus in West Africa” will create the synergies needed to mobilise the various national, regional and international donors to invest in the various initiatives developed to ensure food and nutritional security in the countries of the sub-region.

The meeting made it possible to identify certain financing opportunities at different levels and to call on the actors to look for different financing initiatives, to get closer to the national authorities to explore the mechanisms available at the level of climate financing, including the Green Climate Fund (GCF) to negotiate the positioning of Nexus projects as priority projects. Participants were invited to share the main achievements of this workshop as soon as they returned to their respective countries.

The next steps in the implementation of the Programme, which has just been launched in Bamako, are the finalisation of project documents at regional and national levels in order to be able to agree on the timetable for taking funding decisions from a number of potential donors by June 2018. The development of a strategic framework and guidelines, in collaboration with ECOWAS, to promote the integration of the NEXUS approach to accelerate investments for food and nutrition security at all levels in West Africa will also be implemented in 2018. Emphasis will also be placed on building the capacity of stakeholders to support understanding and ownership of the application of tools and methods to consider the Nexus.

At the Closing Ceremony, the Minister Commissioner for Food Security of Mali, Mr. Oumar Ibrahima Toure, pledged to “carry the results of the Bamako meeting wherever necessary” to underline the importance he attaches to the launching of this initiative, which, he says, “will make a significant contribution to the fulfillment of our mandate to eradicate hunger, ensure food security, improve nutrition and promote sustainable agriculture”.