Ghana’s forestry sector is noted for several things, key among which is the different kinds of debates it generates from time to time. For instance, in the 1990s to the early 2000, the debate revolved around the timber industry’s seemingly hijack of the sector. From 2000 on, the debate dwelt on the lack of transparency, representation and consultation in the decision-making process. 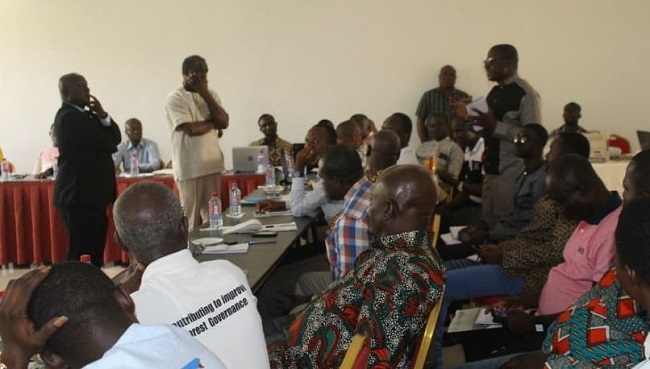 Subsequently, the focus of the debate shifted to the abuse of the sector by officialdom, and then to what has been described by some, especially civil society groups, as unfair sharing of benefits of revenue accruing from timber exploitations.

The current debate is on the utilisation of forest royalties by Assemblies or local authorities, which the coalition of civil society organisations working on forest related issues – Forest Watch Ghana – says “are being misapplied. According to the group, “the Assemblies are using the funds for recurrent expenditure, rather than for ensuring positive socio-economic development of the area from where the timber is exploited.”

It was one of the key issues discussed at length during Forest Watch’s last general meeting for the year in Accra in November 2018. And, for the first time in its history, Metropolitan Municipal and District (MMDAs) Coordinating Directors and selected officials of Assemblies in Forest Districts across the country were invited to participate in the session. The purpose was to generate an objective dialogue to help streamline the process of appropriate utilisation of timber royalties by the Assemblies.

ALSO READ:  ‘Unprofessional use of chemicals in agriculture detrimental to health, environment’

The discussion was facilitated by representatives of KABSTREK Consult Ghana Limited, commissioned by Forest Watch to develop “Guidelines for Utilisation of Timber Royalties by District Assemblies in Ghana.” The assignment was necessitated by realisation of the absence of a constitutional provision, legal instrument or guidelines on the specific use of timber royalties. A situation that has resulted in the non-utilisation of the funds for their intended purposes, and which, according to the draft document, “has invariably resulted in inequity in benefit sharing in the forest sector that contributes to poverty and a lack of sustainable development.”

When finalised and operationalised, the Guidelines will, among other things, ensure that royalties are used to provide socio-economic and infrastructural development of forest fringe and timber producing areas. The Guidelines will additionally assist Assemblies to properly manage the selection and execution of tangible development projects in line with their Development and Annual Plans, and in fulfilment of their obligations under the Public Financial Management Act, 2016 (Act 921).

The document acknowledges that timber royalties have the “potential to significantly impact positively on local development.” But it also admits that the authenticity of the Guidelines will depend on their being backed “by the necessary Legislative Instrument.”

The development of a legislative instrument to support the Guidelines is a crucial step without which they cannot be implemented, according to Raphael Yeboah, a Forestry Sector Legal Consultant. In an interview, he proposed the development of an omnibus legal instrument on royalties from the extractive industry.

“Such a legislative instrument should make it mandatory for Assemblies to use all natural resources related royalties be it timber, minerals, oil or gas for the purpose of developing the areas from where they were extracted,” Yeboah said, adding, “this will stop the ad hoc or arbitrary use of royalties by the Assemblies.”

ALSO READ:  Partnership to educate farmers on use of GM cowpea technology

He called for a consultative process involving major stakeholders including beneficiary communities, in the development of the omnibus legislative instrument to back the implementation of the Guidelines.

This was also the thinking that eventually dominated the discussions at the general meeting, with participants conceding that “the current mindset of the Assemblies is not geared towards using royalties to further sustainable forest management activities.” In addition to the lack of a framework to guide the utilisation of royalties that has perpetrated the situation, it was also blamed on dire financial constraints Assemblies often face and which led to the arbitrary use of any available funds.

The meeting also discussed the issue of Assemblies establishing separate bank accounts for timber royalties and who should be on the fund’s management committee but could not reach a consensus on them. But participants welcomed the draft Guidelines document as a good development, which when finalised and implemented, will enable Assemblies to spearhead community development as well as reduce illegal activities carried out or supported by community members.

The occasion was used to remind Assemblies in areas that do not have timber resources that they do not have a share in such royalties and therefore should not make a demand for it.

Ibrahim Kwaku Acheampong is the Sefwi Wiawso Municipal Coordinating Director and was one of the participants. He described the session on the royalties “as a very useful brainstorming interaction on ways of sustainably managing and preserving our forest resources.”

Mr. Acheampong said the development of the Guidelines has come at the right time and “will minimise some discrepancies and discretionary utilisation of timber royalties.” He added that the guidelines “will make Fund users more accountable to the people because the processes will now be transparent, and users will be careful not to misapply funds.”

Civil society organisations have mostly championed debates in the forestry sector with the backing of international NGOs. Some of the debates were generated alongside the evolvement of global forest management trends such as the Forest, Law, Enforcement, Trade and Governance (FLETG) initiative and the Voluntary Partnership Agreement (VPA) between Ghana and the European Union.

It is worthy of note that Forest Watch Ghana was formed as a result of a movement sparked following one of the debates in the early 2000s. The debates have resulted in major changes in the sector including institutionalising a transparent decision-making process that involves civil society, traditional authorities and local communities. This has led to the review of key policy documents like the Forest and Wildlife Policy and the passage of the Timber Resource Management and Legality Licensing Regulations, 2017, LI 2254, that was championed by the Legal Working Group to which Forest Watch Ghana is affiliated.

Some key debates like that on the benefit sharing of revenue accruing from timber exploitation, which civil society see as unfair and inappropriate, is on-going. The distribution plan is constitutionally provided for in Clause 6 of Article 267 of the Constitution, which apportions 50% to the Forestry Commission.

The remaining 50%, is taken as 100% and split among four main stakeholders namely: Office of the Administrator of Stool Lands, which takes 10%, while Stool lands, the Traditional Authority and District Assembly within the catchment area of the resource takes 25%, 20% and 55% respectively.

Like Loading...
2018-12-05
admin
Previous: 137 solutions developed through climate technology collaboration
Next: Our expectations from Africa at COP24, by PACJA