The effort, called the Blue Nature Alliance, is a collaboration led by Conservation International, The Pew Charitable Trusts, the Global Environment Facility, Minderoo Foundation, and the Rob and Melani Walton Foundation. The Alliance aims to expand and enhance ocean protections with a focus on working alongside Indigenous peoples and local communities, scientists and academia, and other partners.

The Blue Nature Alliance is working with governments and other partners on large-scale efforts in Fiji’s Lau Seascape, Antarctica’s Southern Ocean, and Tristan da Cunha to collectively secure protections over 4.8 million square kilometres (1.9 million square miles) of the ocean. The Alliance will soon engage in efforts in Canada, Palau, Seychelles, and the Western Indian Ocean.

This will aim to strengthen and enhance the protection of nearly 2 million square kilometres (734,000 square miles) of the ocean. A pipeline of 18 additional Blue Nature Alliance engagements has been identified across North and South America, Europe, and the Asian Pacific region. The Blue Nature Alliance will announce the next round of locations in summer 2021.

“A healthy ocean is key to our existence. It provides nutrition and employment for a majority of people around the world and half of the oxygen each of us breathes. Yet significantly less of our ocean is protected when compared to land,” said ‘Aulani Wilhelm, senior vice president of Oceans for Conservation International.

“We must collaborate globally, in partnership with local governments and Indigenous peoples, to make the conservation of our ocean a priority. The time is now to take big practical action to move this work forward,” Wilhelm added.

The world’s ocean is under stress, it is facing threats from climate change, damaging fishing practices, and pollution. Science shows that protecting and conserving large areas of the ocean is necessary to support the air we breathe, regulate the climate, and maintain essential levels of biodiversity.

“From the coastlines to the high seas, we need to tackle conservation holistically and in partnership. Our collective efforts will help secure a healthy ocean that is more resilient to climate change and yields benefits to both nature and people,” said Tom Dillon, senior vice president for environment at The Pew Charitable Trusts.

“To boost biodiversity, fisheries, and economies, the Blue Nature Alliance will work with partners globally to apply science and lessons learned and build on best practices to conserve our ocean at scale. We need this type of ambition to address the challenges facing our ocean today,” added Dillon.

The Blue Nature Alliance’s efforts support the push to protect at least 30 percent of the ocean by 2030, a global conservation goal expected to be formally adopted at the United Nations Biodiversity Conference later this year. To date, less than 10 percent of the global ocean is protected. The 30 percent goal is widely agreed upon as the threshold needed to maintain a resilient and functioning ocean that supports the health of people and nature.

“Conserving 30 percent of the world’s land and sea in the coming decade will require all of us to work together, with science as our North Star,” said Carlos Manuel Rodriguez, CEO and Chairperson of the Global Environment Facility.

He added: “It is heartening to see collaborative work underway in the South Atlantic, South Pacific, and Antarctica’s Southern Ocean, and with work about to begin in even more locations around Palau, Seychelles, Canada, and the Western Indian Ocean. Through the Blue Nature Alliance, we will be contributing significantly to the 30 percent global ocean conservation goal and ensuring we have momentum to build on as we strive for our 2030 ambitions.”

To achieve its ambitious goal, the Blue Nature Alliance is creating a global network of partners dedicated to building on lessons learned from well-functioning marine protected areas and innovating new approaches to conserving large ocean areas, many of which have heavily incorporated the traditional knowledge and needs of local communities and governments into their long-term management plans – a practice that helps ensure resilience, both in funding and implementation.

“Engaging with local communities is essential to the long-term success of ocean conservation efforts,” said Dr. Tony Worby, CEO of Flourishing Oceans at Australia’s Minderoo Foundation. “Local communities rely on the ocean directly for livelihoods, cultural activities and recreation, so it is critical that they are involved in decision making that supports long-term sustainability. A measure of success for the Blue Nature Alliance will be to build community support for ocean conservation measures that are enduring.”

“Melani and I care deeply about the future of our planet and the communities that depend on nature for their health, livelihoods and culture,” said Rob Walton, co-founder of the Rob and Melani Walton Foundation. “That’s why we are pleased to be part of the Blue Nature Alliance – which brings together philanthropists, businesses, governments and NGOs to substantially increase and improve ocean conservation. Now is a critical time. The ocean is under immense pressure, and we all have a responsibility to help safeguard it.” 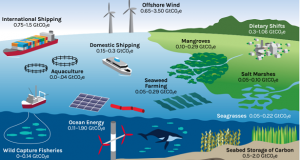 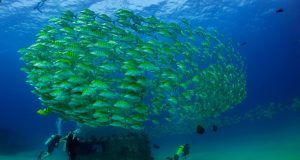