North America’s most widespread and valuable ash tree species are on the brink of extinction due to an invasive beetle decimating their populations, while the loss of wilderness areas and poaching are contributing to the declining numbers of five African antelope species, according to the latest update of The IUCN Red List of Threatened Species. 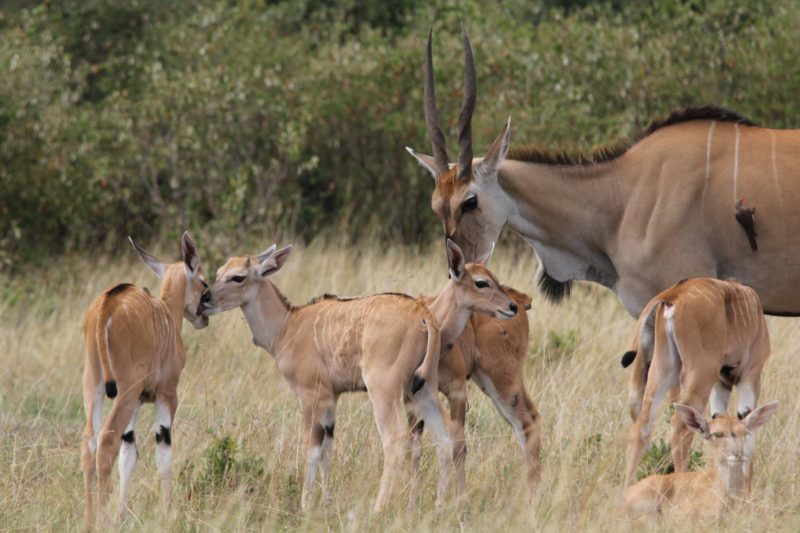 Released on Thursday, September 14, 2017, the IUCN Red List update also reveals a dramatic decline of grasshoppers and millipedes endemic to Madagascar, and the extinction of the Christmas Island Pipistrelle bat.

The IUCN Red List now includes 87,967 species of which 25,062 are threatened with extinction.

“Our activities as humans are pushing species to the brink so fast that it’s impossible for conservationists to assess the declines in real time,” says Inger Andersen, IUCN Director General. “Even those species that we thought were abundant and safe – such as antelopes in Africa or ash trees in the U.S. – now face an imminent threat of extinction.

“And while conservation action does work, conserving the forests, savannas and other biomes that we depend on for our survival and development is simply not a high-enough funding priority. Our planet needs urgent, global action, guided by the Red List data, to ensure species’ survival and our own sustainable future.”

Five of the six most prominent ash tree species in North America enter The IUCN Red List as Critically Endangered – only one step from going extinct – with the sixth species assessed as Endangered. These species are being decimated by the invasive Emerald Ash Borer beetle (Agrilus planipennis). Three of them – Green Ash (Fraxinus pennsylvanica), White Ash (Fraxinus americana) and Black Ash (Fraxinus nigra) – are the country’s most dominant ash trees, comprising nearly nine billion trees in the forested lands of the contiguous U.S. The once-plentiful White Ash (Fraxinus americana) is one of the most valuable timber trees of North America used for making furniture, baseball bats, and hockey sticks.

Ash trees are a key component of North American forests. They provide habitat and food for birds, squirrels, and insects, and support important pollinator species such as butterflies and moths.

“Ash trees are essential to plant communities of the United States and have been a popular horticultural species, planted by the millions along our streets and in gardens,” says Murphy Westwood, member of the IUCN Global Tree Specialist Group who led the assessment. “Their decline, which is likely to affect over 80 percent of the trees, will dramatically change the composition of both wild and urban forests. Due to the great ecological and economic value of ash trees, and because removing dead ash trees is extremely costly, much research is currently underway across sectors to halt their devastating decline. This brings hope for the survival of the species.”

The fast-moving Emerald Ash Borer beetle arrived in Michigan from Asia in the late 1990s via infested shipping pallets, and has already destroyed tens of millions of trees throughout the U.S. and Canada. It has the potential to destroy over eight billion ash trees as it spreads rapidly and can kill nearly an entire forest stand of ash within six years of infestation.

Due to a warming climate, areas which were previously too cold for the beetle are becoming more suitable for it to thrive, making it impossible to know how far it could spread in future.

Although the status of most antelope species remains unchanged, five species of African antelopes – of which four were previously assessed as Least Concern – are declining drastically as a result of poaching, habitat degradation and competition with domestic livestock. This decline reflects a broader downward trend for large African mammals as they compete with the growing human population for space and resources.

The world’s largest antelope, the Giant Eland (Tragelaphus derbianus) – previously assessed as Least Concern – is now Vulnerable. Its estimated global population is between 12,000 and 14,000 at most, with fewer than 10,000 mature animals. This species is declining due to poaching for bushmeat, encroachment into protected areas and expansion of agriculture and livestock grazing. Political instability and armed conflict in Central African Republic are major barriers to protecting this species.

Also previously listed as Least Concern, the Mountain Reedbuck (Redunca fulvorufula) has seen an approximate 55% decline in its South African population over the last 15 years. It is now listed as Endangered as similar declines throughout the rest of the range are probable. Expansion of human settlements leading to increases in poaching and sport hunting with dogs are thought to be the main reasons for its decline. Other threats may include widespread disturbance by cattle herders and their livestock and increased frequency and duration of droughts associated with climate change. Further monitoring data, especially from outside protected areas, are needed to fully quantify the population decline in this species.

Other species are also under threat, including the Heuglin’s Gazelle (Eudorcas tilonura) – now Endangered due to competition with domestic livestock and habitat degradation; Southern Lechwe (Kobus leche), now listed as Near Threatened due to poaching, agricultural expansion, livestock grazing and droughts; and theGrey Rhebok (Pelea capreolus) – the origin of the Reebok sports brand – now in the Near Threatenedcategory. Reasons for the decline of this species are poorly understood, and may include increases in illegal sport hunting with dogs, and poaching for bushmeat.

While the conservation status of the majority of invertebrate species is still unknown, recent assessments are beginning to reveal the impact of deforestation on Madagascar’s invertebrates. An assessment of all 71 species of endemic Madagascan pygmy grasshoppers shows that almost 40% of them are threatened with extinction. Seven of these species enter The IUCN Red List as Critically Endangered, including theRumplestiltskin Pygmy Grasshopper (Agkistropleuron simplex). This flightless species is only known to occur in Manakambahiny forest in eastern Madagascar. The only recent record of the species dates back to 1995. Its decline is due to the loss of its forest habitat.

More than 40% of 145 endemic Madagascan millipedes are also threatened with extinction, with 27 of them assessed as Critically Endangered. These include the Shiny Giant Pill Millipede (Sphaeromimus splendidus), which requires a very specific sandy soil habitat in coastal rainforest areas. Its only habitat – the littoral rainforest of Sainte Luce – is now partly degraded due to wood removal and grazing. However, a planned strip-mining project, which will likely cause the destruction of most of its remaining habitat, poses the greatest threat to its survival.

Thanks to new available data, the Snow Leopard (Panthera uncia) has moved from the Endangered to Vulnerable category. However, its population continues to decline and it still faces a high risk of extinction through habitat loss and degradation, declines in prey, competition with livestock, persecution, and poaching for illegal wildlife trade.

Thanks to significant investments in conservation for this species, including anti-poaching efforts, initiatives to reduce conflict with livestock, and awareness-raising programmes, conditions in parts of the Snow Leopard’s range have improved. It is essential to continue and expand conservation efforts to reverse its declining trend and prevent this iconic cat from moving even closer to extinction.

Thursday’s update declares the Christmas Island Pipistrelle (Pipistrellus murrayi) – a bat species endemic to Australia’s Christmas Island – as Extinct. The population of this species rapidly declined from being common and widespread in the 1980s to between four and 20 animals in January 2009. Only one individual remained in August 2009, and it disappeared later that month. There has been no trace of this bat since then, despite extensive searches of the island. The reasons for the decline are not clear, but may have been a combination of increased predation by introduced species, impacts of invasive Yellow Crazy Ant (Anoplolepis gracilipes) on its habitat and on its invertebrate prey species, or possibly an unknown disease.