As the global community continues to intensify efforts to attain the Sustainable Development Goals (SDGs), the Senior Special Assistant to the President on SDGs, Princess Adejoke Orelope-Adefulire, has urged all stakeholders to make concerted efforts to ensure that the SDGs take centre-stage in development planning and execution. 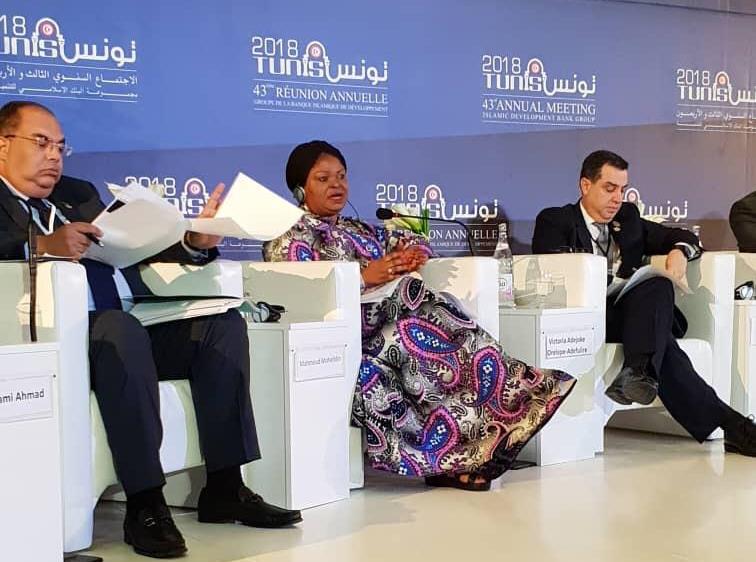 SSAP-SDGs, Princess Adejoke Orelope-Adefulire, and other panelists at the 43rd Annual Meeting of the Islamic Development Bank Group in Tunisia

The Presidential Aide made the demand recently while speaking on the topic: “Forging Smart Partnerships with Multi-Stakeholders for the SDGs: the Nigerian Experience” at the 43rd Annual Meeting of the Islamic Development Bank Group in Tunisia.

“In view of the fact that multi-stakeholder partnership is the key driver of the SDGs implementation, I call on stakeholders to embrace smart partnerships to accelerate progress on the SDGs,” a statement issued by the media assistant to the SSAP-SDGs, Desmond Utomwen, quoted the SDGs boss as saying.

Princess Adejoke Orelope-Adefulire further stated that, as part of the commitment of the Nigerian government, the country has taken concrete steps to promote partnerships for economic development, for political engagements as well as for scientific and technological innovations which include activities such as joint ventures, research corporations, joint R&D, technology research agreements (such as technology sharing, cross-licensing and mutual second-sourcing). She added that other areas of partnerships included domestic and international direct investment, customer-supplier relations and R&D contracts, among others.

“The SDGs Office has also taken proactive steps by collaborating with key stakeholders locally, such as the National Bureau of Statistics (NBS) and the United Nations Development Programme (UNDP) to map out existing SDGs related data, followed by the aggregation of 126 SDGs indicators cutting across the 17 Goals and 169 targets,” she submitted.

According to her, these indicators are being incorporated into the SDGs Results Framework being developed by the Office, which will be useful for benchmarking progress going forward. The SDGs Indicators are said to be the backbone for tracking and monitoring progress on the SDGs at the national and sub-national levels.

Princess Adejoke Orelope-Adefulire, however, demanded that, in order to fast-track the implementation of the SDGs, MDAs’ policies, plans, programmes and activities must be guided by these indicators as they will be used to measure the impact of the interventions, make policy decisions and align strategies with internationally yet locally relevant priorities.

The presidential aide further noted that the SDGs Office in Nigeria has undertaken a number of steps to entrench the principle of partnerships in her efforts to accelerate the attainment of the SDGs. These include establishment of multi-stakeholder engagement mechanisms such as the Private Sector Advisory Group (Nigeria was the first to establish this advisory group), Donors’ Partnership Forum on SDGs, Civil Society Strategy Group on SDGs, and Mobilisation of influencers such as SDGs Ambassadors and SDGs Champions for SDGs advocacy.

ALSO READ:  Parties meet on the Safe Use of Living Modified Organisms

The Office of the Senior Special Assistant to the President on SDGs has also engaged in strong partnership with the Ministry of Budget and National Planning to ensure the SDGs is embedded in the National Development plan and the Short Term Plan (2020), National Economic Recovery Growth Plan (NERGP) for which the President recently launched the NERGP Focus Labs. There is also the Inter-Ministerial Compact Group, established to enhance cooperation and synergy between the Office of SSAP-SDGs and Nigeria Ministries, Departments and Agencies, Orelope-Adefulire stated.