Saturday 28th November 2020
Saturday, 28th of November 2020
Home / Cover / Why all government ministries should take up climate campaign, by Espinosa

Why all government ministries should take up climate campaign, by Espinosa

June 11, 2017 Comments Off on Why all government ministries should take up climate campaign, by Espinosa 732 Views

Speaking at the G7 Bologna Environment Ministers’ Meeting on Sunday, June 11, 2017, the Executive Secretary of the UN Framework Convention on Climate Change (UNFCCC), Patricia Espinosa, said that the national climate action plans (“Nationally Determined Contributions”, or “NDCs”) governments have put forward under the Paris Climate Change Agreement are as much sustainable development plans as they are climate action ones. According to her, the climate agenda requires solutions from every ministry in order to speed faster and at scale 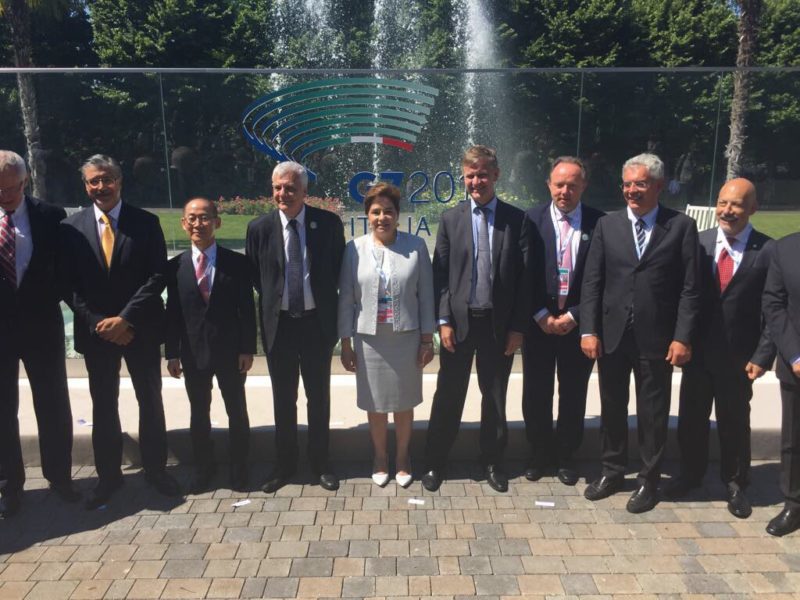 These are two topics, but one agenda – namely how, on a planet of over six billion people rising to over 10 billion by 2050, can we implement a holistic and integrated development path that minimises environmental damage and degradation and maximises economic and social opportunities for all.

These two inseparable pathways are our shared vision of a better, less risky, less insecure, and more peaceful and prosperous future for this and the next generations.

I am grateful for the opportunity to provide a UN perspective and to outline briefly where we are on this transformational journey and what needs to be done now.

I would also like to thank Italy and Connect4Climate for the All 4 the Green initiative, which supports public awareness about sustainability. Bringing people into this discussion is crucial.

We need governments, we need business, we need cities, territories and regions to all act in concert. But we also need an aware and an engaged public to make their contribution and to motivate us all to take the next, ambitious steps.

Because in the end, and however you look at these interlinked issues, it is all about people.

I was just in New York for the Oceans Conference where, with UN Deputy Secretary General Amina J Mohammed, we received a petition with two and a half (2.5) million signatures of people who support the Paris Climate Change Agreement and action on oceans.

We were also with Frank Bainimarama, Prime Minister of the Pacific island of Fiji and incoming president of the next UN Climate Change Conference in Bonn, Germany in November, who said: “Rising sea levels, as well as ocean acidity and warmer waters have a direct effect on our reefs and fish stocks and the prosperity of our coastal communities.

“So oceans and climate change aren’t separate. They are interlinked,” said Mr Bainimarama, again underlining the inseparability and interconnectedness of the new journey the world is on.

Let me share with you what has happened since the Paris Agreement and the SDGs were adopted in December 2015 and spotlight some issues that require your help and your guidance.

As you know the Agreement entered into force in less than 12 months. Right now, the number of Parties who have ratified the Paris Agreement stands at 148 – and more are ratifying monthly.

It signals an incredible sense of enthusiasm and ownership by nations North and South, East and West.

But the job is not complete. The Agreement needs implementation guidelines, or some might say an “operating manual”, so its full potential can be harvested now and over the years and decades to come.

Your leadership and support can play a crucial role in ensuring this process is on track and delivers on time.

2018 is also a key year for governments to assess and take stock of how they are doing in terms of meeting the Paris Agreement.

Currently we know that what countries have pledged collectively will not, as yet, meet the goal of a better, more secure and prosperous world.

So collectively, we need to raise our sights and our ambition and 2018 is an opportunity for ministers to articulate this.

2018 will also see a scientific assessment by the Intergovernmental Panel on Climate Change on prospects and scenarios for keeping a global temperature rise to not just well below 2 degrees C, but 1.5 degrees C. I feel privileged to participate in today’s dialogue with the President of the IPCC, Dr. Lee, whose work has been fundamental for our process.

For the peoples of many small islands like Fiji, but also those living on vulnerable coastlines across the globe, keeping a temperature rise as low as possible may be crucial for their very survival.

These enabling frameworks of the Paris Agreement, including support to developing countries to achieve their plans, are going to be key for scaling-up ambition at speed and at scale across nations, economies and sectors.

It is happening – let me give you a few examples.

In April this year the UN Environment released their annual assessment of renewable energy.

It showed that in 2016 new renewable power capacity installed world-wide was up 8 percent as costs continued to fall for each unit of electricity.

The growing penetration of clean energy globally was cited by the International Energy Agency this year as one reason why, by some measures, greenhouse gas emissions have stayed flat for three years running despite global economic growth rising by over 3 percent.

Oil and gas is on board. Saudi Arabia announced a $50 billion push to develop renewables; the head of OPEC confirmed support for the Paris Agreement and Exxon shareholders recently voted to review climate-related risks.

In businesses – sustainable supply chains, efficient operations and clean energy, all make a real, bottom-line difference at a moment when consumers want responsibility.

In local government and legal structures – cities and regional governments with billions of people and a huge percentage of global GDP are acting on climate change.  And we now have more than 1,200 climate-related laws globally, which is key for accountability.

This momentum is also seen in the increasing understanding of the wealth to economies and the contribution to human well-being, of what you might call “soft-infrastructure” – the world’s forests, soils and agricultural systems.

Again, how we manage these nature-based assets can either slow or accelerate the sustainable development of nations and the security of our only home: Earth.

Just look at the benefits of better managing and conserving mangroves, salt marshes and sea grasses. These ecosystems form a natural barrier against extreme weather and promote healthy lives and livelihoods as fish hatcheries, feeding millions and providing jobs – and absorbing the equivalent of perhaps half the world’s transport emissions.

Indeed every positive action on climate has positive sustainability benefits and vice versa.

Sustainable, low-emission transportation connects people and products across the world in ways that cut costs and reduces environmental harm.

Greening the financial architecture provides stable returns and ensures one person’s retirement doesn’t come at the expense of the next generation.

So there are many, many examples of good news – and there needs to be, because time is not on our side.

NASA, the US space agency, reported in March that the extent of sea ice in the Arctic and around Antarctica hit record lows.

The UN’s World Meteorological Organisation this year confirmed that 2016 was the warmest year on record – a remarkable 1.1 °C above the pre-industrial period, which is 0.06 °C above the previous record set in 2015

The World Meteorological Organisation’s report also underlined that levels of greenhouse gases continue to rise in the atmosphere and that climatic impacts are being felt in many parts of the world.

As the UN Secretary-General, Antonio Guterres, said only a few days ago, climate change goes to the heart of the UN’s mission: “The moral imperative for action is clear. As regions become unlivable, more and more people will be forced to move from degraded lands to cities and to other nations”.

“We see this already across North Africa and the Middle East. That is why there is also a compelling security case for climate action,” he said.

ALSO READ:  How Nigeria will be prominent at COP 19

The Nationally Determined Contributions or NDCs Parties have put forward are as much sustainable development plans as they are climate ones. At the national level, this agenda requires solutions from every ministry in order to speed faster and at scale.

I therefore encourage you all to engage with other ministers – of finance, of energy, land use, transportation and more to find solutions that work for your country and inspire others.

Let me be candid, the transformation envisaged in the Paris Agreement and the SDGs will not be plain sailing, there will be bumps along the road: political, economic and social. But we at the United Nations are committed to continue working with all governments and partners to fast forward climate action and strive towards our common sustainable development goals.

As members of the G7, you have a great deal to contribute that can benefit your economies and support the rest of the world.

Let me close by mentioning finance, because this transition will not happen without it.

A new report by the Organisation for Economic Cooperation and Development (OECD) Investing in Climate, Investing in Growth argues that “bringing together the growth and climate agendas” could add one percent to average economic output in the G20 countries by 2021 and lift 2050 output by up to 2.8 percent.

If the economic benefits of avoiding climate change impacts such as coastal flooding or storm damage are factored in, the net increase to GDP in 2050 would be nearly 5 percent

Limiting the global temperature rise to below 2 degrees, in line with the Paris Agreement, will require $6.9 trillion per year in infrastructure investment between now and 2030, only 10% more than the carbon-intensive alternative

However, climate-friendly infrastructure is more energy-efficient and would lead to fossil fuel savings totaling $1.7 trillion annually, more than offsetting the incremental cost, says the OECD report

Sustainable development is this generation’s responsibility and its opportunity. It goes to the heart of the kind of world we all want.

Beyond the numbers, we can protect the wellbeing of every living being – every man, woman and child – on this one planet we all share and we all ultimately depend upon. This must be the legacy we leave and the inheritance we hand on to our children and grandchildren.

I look forward to welcoming you to our home city of Bonn in November this year for the next round of negotiations, where we can together write the next inspiring chapter of history, security and prosperity in the making.