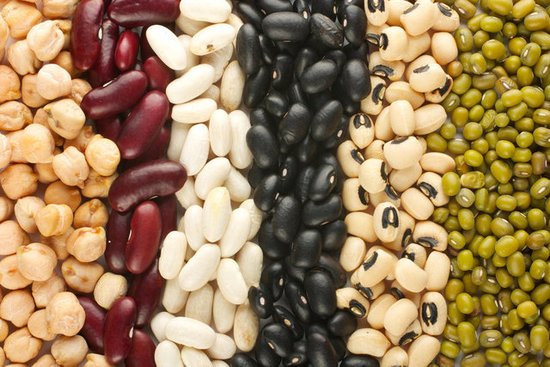 Beans come in many shapes, sizes, colours and tastes

Millions of Nigerians eat beans and the foreign biotechnology companies have long wanted to gain access to the production of this local staple food. Genetically-modified beans (Bt Cowpea) contains the gene called Cry1Ab Bt gene, developed by Monsanto. Nigerians would be the first guinea pigs in the world  for testing the biological effects of GMO beans (Bt Cowpea) since it has until now never been commercialised anywhere in the world.

Scientists are waiting to learn the massive health hazards that would result in millions of people eating the latest poisonous GMO beans (Bt Cowpea). The effects of the same gene Cry1AbBt in GMO beans (Bt Cowpea) that was inserted into Monsanto MON810 maize showed that it resulted in massive toxicity of human liver cells, caused massive allergic reactions, damage to blood cells, kidney, spleen and adrenal glands.

These health hazards were the reasons behind the discontinuation of the use of this Cry1Ab Bt gene in Maize, but has now been inserted into the Nigerian GMO beans (Bt Cowpea). The lucrative market and the power to control the major food staples of Africans has been a persistent goal of Monsanto and their main billionaire American investor and so-called ‘philanthropist’ using a false pretext of foundation humanitarian aid to Africa. They seek to control the political, social andeconomic sectors of Nigeria in a new wave of Biological Colonialism according to the Kissinger Maxim “He who controls thefood controls the people”.

The work on the Nigerian GMO beans (Bt Cowpea) was funded by the Bill and Melinda Gates Foundation with a $4 million grant through the African Agricultural TechnologyFoundation (AATF). Unfortunately, the National BiosafetyManagement Agency (NBMA) has operated as a GMO advocacy organisation rather than a regulatory agency, and has failed Nigerians by issuance of permits for field trials and now poised to grant commercial release of these dangerous GMO crops. Evidence shows that the biotechnology companies operate by bribery and corrupt practices of top government officials and politicians to push their products through the regulatory huddles.

We call on President Muhammadu Buhari to probe and sack any government functionary implicated in bribery and corrupt practices in the agencies and ministries. Offenders must be charged with acts of treason and breach of national security. The National Assembly should hold public hearings on the introduction of GMO crops into Nigeria . The national food security is being compromised, posing an even more urgent and devastating threat than the Boko Haram crisis. The lives of millions of Nigerians are currently at grave health risk. The question to the Federal Government of Nigeria is why they have chosen to ignore overwhelming scientific evidence provided by internationally reputable scientists http://acbio.org.za/wp- content/uploads/2015/07/GM- Cowpea-report.pdf, on the health dangers of GMO crops, while Europe, America, Asia, Russia, China and South Africa have all rejected these same crops on healthgrounds.

Recently Monsanto lobbyists were banned from the European parliament, and Nigeria should do the same. Nigerian agricultural sector is being destroyed because contamination of 1% with GMO crops will attract a ban of the agricultural import into Europe, Russia, China and USA. It would mean that the agricultural sector going forward will never bea major export earner of foreign currency and the health risks to Nigerians would pose increasing challenges for the overwhelmed health system.

The GPA had earlier alerted the Federal Government of Nigeria that the perpetrators of the Boko Haram crisis were funded by foreign biotechnology companies who use the so-called insurgents to clear the fertile North east farmlands of natural agricultural plants and seeds only to introduce GMO seeds as aid to IDP farmers. The introduction of the GMO crops is the real reason for the insecurity in Nigeria! We call on President Buhari as the Commander-in-Chief  to act decisively and expeditiously to stop the introduction of GMO crops and save Nigeria from this dangerous threat!