On November 28 and 29, hundreds of thousands of people around the world will take to the streets in more than 2,000 events in 150 countries to turn up the heat on leaders heading to the Paris Climate Summit. 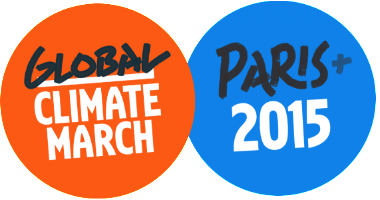 Frontline community representatives, unionists, faith leaders, and families will call on politicians to forge an ambitious new global climate agreement this December that speeds up the just transition from fossil fuels to 100% renewable energy and protects vulnerable people from worsening climate impacts. The people’s call for leadership will be harder and harder to ignore.

With the major march in Paris cancelled due to security concerns following the horrific terrorist attacks which occurred there on November 13, French activists are calling for people around the world to march in their name, in solidarity with them.

Ultimately, citizens’ voices will be heard throughout the Paris Climate Summit which runs from November 30 to December 11, 2015 – including in the streets of the French capital as activists explore creative ways forward. The Summit is set to deliver a comprehensive climate agreement which should scale up the transition to 100% renewable energy.

The Global Climate Marches happening around the world will be a symbol of the unshakeable resolve of the movement working for a safer, fairer and cleaner world.

NCF cautions against indiscriminate use of wetlands

WaterAid, a non-govermental organisation, with support from Latter-Day Saints...

Pope Francis has denounced the “poison of greed” driving...

General elections: Whither climate change in their manifestos?

As candidates intensify campaign for various elective positions in...