Global climate actions call on world leaders to wake up to 1.5

People worldwide have launched a global coordinated delivery of the recently released IPCC report to decision makers across the globe. The actions demand that all institutions withdraw their support from the fossil fuel industry and stand up to them before it’s too late. 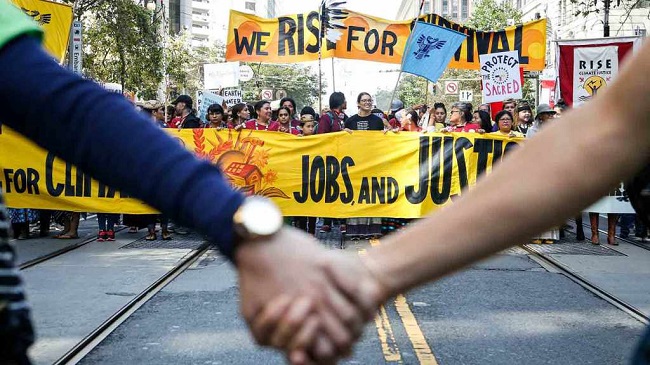 Actions will take place in over 100 different locations and include banner drops, hand deliveries and other forms of creative action.

The scientific report confirms the need to keep fossil fuels in the ground to achieve 1.5ºC and demonstrates that it is feasible, if the world takes urgent action. Greenhouse gas emissions need to drop to half their current level by 2030 åand reach net zero by 2050. At the same time, renewable energy needs to progressively provide most of the energy, reaching 70-85% by mid-century.

While the urgency to kickstart a global systemic transition should be now clear, national climate plans are currently setting us on a path to over 3°C of warming by the end of the century. Climate activists, scientists and communities worldwide are advocating for these plans to be dramatically improved at the next UN climate change conference, COP24.

Payal Parekh, 350.org Programme Director, commented: “The fossil fuel industry is knowingly causing the climate crisis. The scientific and economic case for a global transition away from fossil fuels is stronger than ever, yet national governments, financial institutions and other centers of economic and political power keep propping up this polluting industry. The IPCC Special Report on 1.5°C makes it clear that you’re either on the side of science or on the side of the fossil fuel lobby. We’re delivering copies of it worldwide to remind decision-makers that it’s high time they made a choice.”

Communities worldwide are already resisting fossil fuel development and calling for a deep transformation of our energy systems and economies. Some of these stories of resistance can be found in the newly released People’s Dossier on 1.5°C authored by 350.org .

The Dossier puts faces and voices onto the facts and data provided by the IPCC special report. It contains the stories of 13 communities fighting on the frontlines of climate change: from young Pacific Islanders trying to stop the Adani mega-mine to fishermen communities in Africa battling against new coal plants; from the struggle to stop a gigantic gas pipeline among the olive groves of Southern Italy to the landowners and Native Americans putting solar panels on the route of the Keystone XL pipeline.

Like Loading...
2018-10-11
admin
Previous: WHO vaccinates 377,000 against cholera in Adamawa
Next: ‘Unprofessional use of chemicals in agriculture detrimental to health, environment’