The European Bank for Reconstruction and Development (EBRD) and the Green Climate Fund (GCF) are teaming up to make a major contribution to a $1 billion renewable energy project in Egypt. 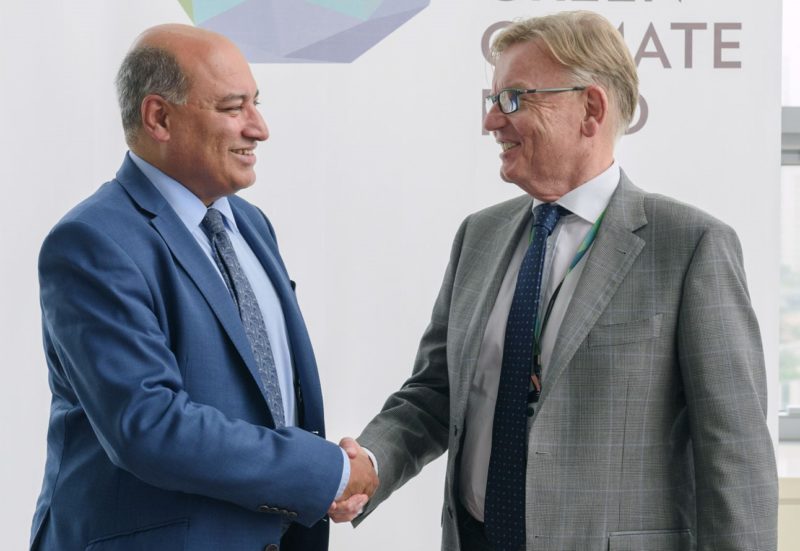 The funding supports the Egyptian Government’s Sustainable Energy Strategy, which aims to source 20 percent of Egypt’s energy from low emission renewable sources by 2022. The financing will allow independent power producers to invest in the first wave of private renewable energy producers in Egypt.

Funding for this initiative, the largest contribution by GCF since it began full-scale operations, is expected to start flowing in September 2017. This follows the signing of a Funded Activity Agreement (FAA) between GCF and EBRD on Thursday, August 17, 2017.

The EBRD is providing $352.3 million while GCF is making a contribution of $154.7 million. Additional financing from sponsors and other co-financiers will bring the total investment in new private renewable energy generation in Egypt to $1 billion.

GCF Executive Director, Howard Bamsey, said the FAA signing marks a benchmark in the way GCF can work with its partners to pool financial resources to boost countries’ mitigation and adaptation capacities. “This FAA is just the beginning of the potential GCF and EBRD have in combining their financial forces to drive climate action across various parts of the planet,” said Mr Bamsey.

The GCF Executive Director added the GCF Board has already approved three diverse projects proposed by EBRD in addition to the Egypt initiative. These include a hydropower project in Tajikistan; a water conservation project in Morocco; and a sustainable energy project crossing 10 countries.

EBRD President, Sir Suma Chakrabarti, said this initiative, the nearest to implementation of the GCF-approved EBRD projects, underscores the very productive cooperation between the two organisations. “Climate finance is crucial to the EBRD’s strategy. We are aiming to dedicate 40 percent of our annual investments to the green economy by 2020,” he said, referring to the EBRD’s Green Economy Transition policy, launched in 2015.

The GCF was established in 2010 to finance climate change projects and programmes that help developing countries adapt to climate impacts and reduce greenhouse gas emissions. It is the largest global fund with the ability to leverage the private sector in tackling climate change.

The EBRD was created in 1991 initially to support Eastern European countries make the transition to open market economies. It has been investing in the southern and eastern Mediterranean region, which includes Egypt, since 2012.

Its financial support is primarily focused on the private sector, in particular on micro, small and medium-sised enterprises. It uses a range of financing instruments, mainly loans, equity investments and guarantees.