There are fears that the Irhue Rainforest in Uhunmwode Local Government Area in Edo State, Nigeria, is under severe threat, no thanks to the activities of a multinational agro-allied firm. 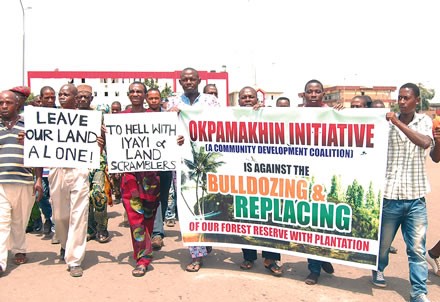 Residents and indigenes of Orhua, Oke, Umokpe and other villages of the Irhue Clan in Uhunmwode are having sleepless night over the fact that their God-given rich and diverse lowland rainforest is being forcefully taken over by the firm to establish a single-crop oil palm plantation, apparently against public-interest.

It was gathered that the Edo State Government, the sole trustee on all lands in the state, faulted as illegal the land acquisition made by Okomu Plc, the firm at the centre of the controversy. Government thus revoked and returned the land to the Clan, and reportedly warned Okomu Company to vacate and stop planting on the vast land area. But, alas, the firm allegedly disobeyed the directive and bulldozed, along with farm crops, priceless endangered species and important land forms.

In a recent petition by the The Okpamakhin Initiative / Coalition for Protection of the Environment (COPE), villagers accused the firm of using “a divide and rule” strategy to get erring squatters on the land against original owners of the Clan and land, “in the belief that the aboriginal Irhue people are too poor to defend their inheritance and rights”.

Tony Erha, an environmentalist, who heads COPE, accused Dr. Graham Hefer, a South African immigrant to Nigeria and the company’s boss, of masterminding his company’s refusal to carry out an Environmental Impact Assessment (EIA) study, which the Federal Ministry of Environment had mandated the firm to carry out even before commencing the project. Erha alleged that Okomu Company midwifed “a belated and deceitful” EIA draft report, more than two and half years after it had been “doing great destruction to the land and the people.”

“If the Clan was left to resort to self-help, against unwarranted and incessant harassment with security men and direct aggression from the rampaging Okomu Company, Irhue Clan would have for long become another Niger Delta community that is crisis-ridden! Okomu Plc continues to drive them to the wall!” reads the petition.

The petition further reads: “Trouble began for the innocent Irhue Clan in February, 2014, when Okomu Plc, guarded by armed men in uniform, started bulldozing on the over 16,000 hectares (ha) of rich rainforest land, which it unduly bought from the Iyayi Group of Companies. Similarly, some years ago, Okomu Company and Dr. Hefer had illegally purchased over 15,000 ha of high forest land around the Okomu National Park, from the same Iyayi Group, which it bulldozed to extend its plantation, despite intense protests from conservationists and well-meaning public. Today, Edo State Government has also revoked this land, which destruction has greatly endangered the National Park – a globally acclaimed park and one of the last (few) protected lowland rainforest enclaves in the world.

“Irhue Clan and the fast increasing local and external population of land users, solely depend on the land for timber, water-supply and traditional worship centres. The high biodiversity of priceless flora, fauna and natural forms, had always been earmarked as extension of the Okomu National Park, by global conservation experts and institutions. From the proposed Okomu palm plantation, dangerous chemicals and effluence are being emptied into their environment and only sources of water, with deadly health consequences to the Irhue locals.

“With this impunity, are Okomu Plc and Dr. Hefer above the Law of the Land? Okomu plantation is Illegal and Must Not Stand on Irhue Clan! Degraded part of the Forest Reserve should be regenerated with trees, for the original purpose it is meant!”