Ghana’s former President John Agyekum Kufuor has stated that “it will be a mistake and a very sad one, for humanity to throw up our hands and abandon our fight against climate change.” He explained that climate change “is very real and its related natural disasters and associated problems are bigger than the human mind can comprehend and that is why we must continue to work out solutions.” 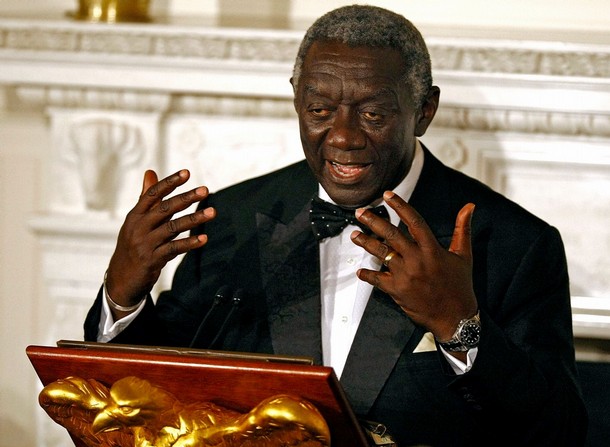 President Kufuor expressed these sentiments in response to a question on the seeming waning zeal of some African governments and civil society organisations in the fight against climate change. This was in an exclusive interview on his current perceptions about the phenomenon, following the end of his tenure as one of two erstwhile UN Secretary General Ban Ki Moon’s Special Envoys on Climate Change. The other was Jens Stoltenberg, former Prime Minister of Norway.

The two were assigned to assist in engaging Heads of State and governments around the world to mobilise political will and action on climate change in advance of the 2014 Climate Summit in New York. Their assignment in a way contributed to the international acceptance of the Paris Climate Accord during the 21st Session of the Conference of the Parties of the UN Framework Convention on Climate Change (UNFCCC), dubbed COP21 and held in France in 2015.

The former President said the assignment has made him comprehend climate change issues and the frustrations that come with trying of find solutions.

“At times out of desperation, when you tackle a problem and you don’t get the solutions as quickly as you want to, you throw your hands up and just give up,” adding, “but if we can make our mark, we must continue to accept the guidance of scientific research and technological efforts at findings solutions devoid of sentiments,” he said

He that another impact of the assignment on his life is that, “naturally, I’m still interested in and do follow climate change issues and how nations are mitigating and adapting.”

On the issue of climate financing, President Kufuor said every country is supposed to contribute to working out solutions as indicated by the Nationally Determined Contributions (NDCs). The NDCs are key to the Paris Agreement and represents efforts by each country to reduce national emissions and adapt to the impacts of climate change. 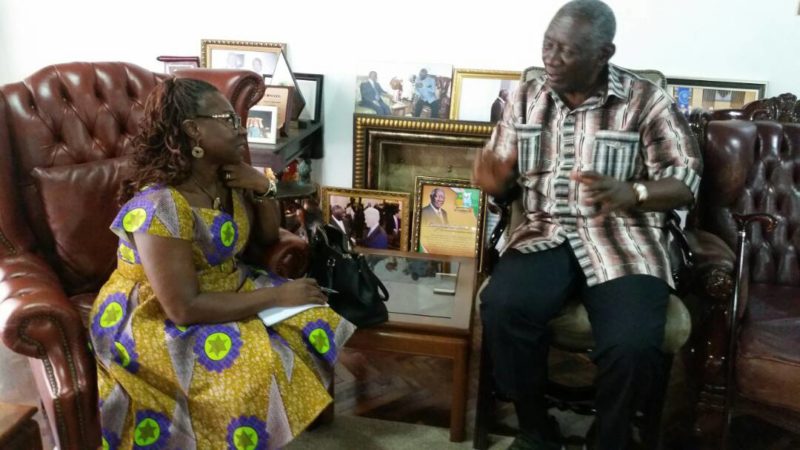 President Kufuor (right) in a chat with Ama Kudom-Agyemang

He noted, “The forces that are being unleashed by climate change are so overwhelming and time is not on our side. We need to do whatever we can by ourselves first of all, and external help will come.” He wondered, “how come rains in recent times, are wrecking such havoc, we didn’t use to see such things before.”

President Kufuor urged African countries to do all in their power to reduce emissions and “once we do our part, the industrialised nations will also live up to their expectations, and then cumulatively we will be working for the entire world.” He was of the view that once, climate change related activities are streamlined and prioritised, allocations could be made in the national budgets to cater for their implementation.

The former President also touched on the perception that the Chinese were importing climate change into African countries through their numerous projects. He cautioned Ghanaians to beware of speaking in such general terms of the counterproductive activities of some Chinese in the country.

President Kufuor explained that statements like “the Chinese are spoiling our country,” could imply that “it is their government or nation that is behind the activities. But no, no, no…” he emphasised.

His thoughts on these developments were that “now the world is opening up so fast with mobility of people and their individual initiatives all around the world, thanks to advancing technology in transportation and communication. So we may get some people coming in to pursue their own selfish economic and business interests.”

President Kufuor added that “they come and without conscience, just driven by greed and perhaps ignorance, they liaise with some locals who again for some petty gain, not appreciating the damage they doing to their own environment engage in galamsey (illegal mining) activities, polluting our waters and environment.” He emphasised that when such people are caught the law should deal firmly with them and reiterated that “we have to be careful of not labeling the Chinese government as being responsible for the infamous activities of some Chinese individuals or firms.”

President Kufuor pointed out that “China as a nation is very concerned about the impact of climate change and the devastation it is causing in their environment.” Therefore, the nation has developed a technology for greening deserts. He recalled his visit at the invitation of the Chinese government to witness how the new technology had been employed. “I was impressed that in the huge Inner Mongolia Kubuqi Desert, about 6000 of the 18, 600 sq. km. of the area has been turned all green, with soil nutrient fixing grass, luscious fruits and vegetables.”

According to an article by Charlie Campbell published in the July 27, 2017 edition of Timeinc.net, “In 1988, the Chinese firm Elion Resources Group partnered with local people and the Beijing government to combat desertification. Almost three decades later, one third of Kubuqi has been greened. Special plants have been grown to grip the shifting sands and to prevent the dunes encroaching on farms and villages.”

Known as the Kubuqi Ecological Restoration Project, the result now is that “the cattle have returned, and secondary industries have sprung up, with tourists flocking to new locally-run hotels and restaurants, eager to explore the dunes on boards and buggies.”

Consequently, the United Nations Environment Programme (UNEP) estimates the project to be worth $1.8 billion over a 50-year period. Thus, “Kubuqi’s transformation burnishes China’s credentials as an environmental leader at a time when Washington is retreating from its international commitments,” notes the writer.

And President Emmanuel Macron of France affirmed these sentiments, when he stated: “Now China leads,” following US President Donald Trump’s refusal to reconsider withdrawing from the Paris Climate Accord

“So I want to be careful we do not generalise when we’re talking about stray Chinese individuals in collusion with some of our own people,” Ghana’s former President stated.

He compared galamsey activities to the American gold rush where people picked up cutlasses and spades wherever they could find gold, saying “this could go on till policy is brought to bear, regularise and guide such activities. In this wise, he commended the government for taking “some very significant steps to contain the situation.”

“But beyond that,” President Kufuor said, “we should also rally the masses of people in the catchment areas of such places for social education. Let them see the dangers they are perpetrating on themselves and on the nation as a whole, and let them know there could be alternatives, let them know that government is fashioning policies perhaps to move them into cooperatives with concessions away from water bodies and farms so they could pick out their living legitimately.”

He further said, “Extension officers could help drum this into the consciousness of galamsey operators that they are not doing things right,” stressing, “we must not stop the current campaign, but we must use mass education with extension guidance and policies to move people away into legitimate operations with appropriate technologies of small scale operators.”

The ex-Un Special Envoy on Climate Change also had a word for Ghanaians ahead of the forthcoming global celebration of World Water Day on March 22 on the theme, “Nature and water.”

“We can’t separate water from nature they are intertwined. We learn from science that as humans our bodies are made up of about 70% water, so how would one say water is there and nature is on the other side. Water is life and without water, we’re killing nature and this is part of the reason why we should uphold the sanctity of water. Because water, life and creation go together and religious people know this,” he said.