Flood: Fears of famine as East-West highway is threatened

October 7, 2012 Comments Off on Flood: Fears of famine as East-West highway is threatened 703 Views

The Delta State Government has expressed fears that, following the extensive flooding being experienced in the state, famine is looming, and that the East may be cut off from the rest of the country. 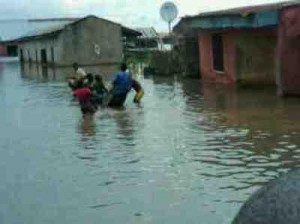 The over two weeks of ravaging flood in the state, besides claiming the lives of a traditional ruler as well as over 10 others, has submerged houses, markets, hospitals, banks and other facilities.

The flood, which has inundated over 100 houses, is also threatening to take over the busy Onitsha-Asaba-Benin Expressway at the River Niger bridge end at Asaba, and cutting the Eastern part of the country from the rest of Nigeria.

Deputy Governor, Professor Amos Utuama, disclosed that the worst is yet to come, saying that the fact that the month of River Niger is in Asaba confirms the notion that the calamity would be more than this since all the water in the northern part of the country finds its way to Delta.

He stated that despite the fact that more camps are being created to accommodate the over 10,000 displaced people, the naval base in Delta has been contacted to rescue people trapped in the flood, just as he said clinics have been opened in the camps to treat people with river borne diseases contacted through contaminated water.

Delta State Commissioner of Information, Chike Ogeah, while inspecting the extent of damage caused by the flood, said the Asaba-Onitsha Road could suffer the fate of the Lokoja-Abuja Road (which was submerged) if the government does not urgently do something.

ALSO READ:  Why we Rise for Climate Justice – Bassey

He said the disaster is overwhelming, considering the number of the displaced persons, even as he pleaded with the Federal Government to immediately put machinery in motion to arrest the trend, warning that the East will be cut off from other parts of the country as a result of the rising water level.

Commissioner for Agriculture, Misan Ikubehinje, emphatically said famine is imminent considering the damage done to farmlands, livestock and all aquatic lives, saying most affected are farmers who have farms that link the tributaries of River Niger.

According to him, most hardly hit are the fish, crop and pig farmers who have lost their fishes, an indication that there could be shortage of food. He expressed regret that 90 per cent of the farmers did not insure their farms and farm yield, “an indication that that have lost everything to the disaster.”

Meanwhile, Governor Emmanuel Uduaghan has directed the heads of the flooded Local Government Areas of the state to drive the efforts to evacuate victims of the current flooding in the state within two days.

Uduaghan, who directed all political appointees to return to their LGAs to assist in the evacuation and rehabilitation efforts during a meeting with members of the flood disaster committee, political appointees and Heads of Personnel Management (HPM) of the affected local government areas, said those trapped by the flood must be evacuated within two day.

In particular, he said a comprehensive report of the flooding detailing every community affected, number of displaced persons, those trapped, casualties, rehabilitation camps, problems and challenges faced should be ready within the same period. He noted that the welfare of the displaced persons was paramount to the state government, stressing that his
administration was putting everything in place to make the rehabilitation camps conducive.

“We are asking for assistance from other organisations and groups because everybody needs to be involved whether they are from the affected areas or not., So far, I have refused financial assistance from people, if any group or person has money to help the displaced people, they should convert it to tangible goods,” he said.

A victim, Chief Patrick Onyeobi, who is former Secretary to the State Government in the old Bendel State, lamented the flood that has sacked his family from his house in Asaba, saying the flood is like a warzone and that if the water does not recede Asaba would be cut off.

Corroborating Onyeobi, Okocha Paul, President, Ewulu Progressive Union (EPU), said the water covered his house just as he said his children are living on the tree for the past three days while the rest of his family are stranded in an unknown place.

In a related development, Governor Seriake Dickson of Bayelsa State has inaugurated a State Emergency Response Flood Management Committee to co-ordinate immediate evacuation of flood victims and provide relief materials in the eight LGAs of the state.

The committee is headed by Deputy Governor, John Jonah, while Secretary to the State Government (SSG), Edmund Allison-Oguru, would serve as Secretary.

Membership of the committee comprises over 20 officials including special advisers, government special representatives of LGAs, representative of Commissioner of Police, Special Adviser on Security, House of Assembly Committee chairman on Environment and Chief of Staff and Deputy Chief of Staff, Government House, Yenagoa.

Chairmen of LGAs would serve as chairmen of their respective Local Flood Relief Sub-Committees as well as Commandants of camps. The Committee is also saddled with the responsibility of evacuating victims of all the flood ravaged communities to relief camps to be built on high land locations.

Dickson charged the committee to interface with all relevant agencies of government and other international relief agencies to provide succour for all victims in the camps and work out a post-flood relief and possible mitigation measures to forestall adverse effects on the state’s economy.

According to the governor, government had designated the Samson Siasia Sports Complex in Yenagoa as camp for people displaced by the flood.

In the wake of the recent predictions by the Nigerian Meteorological Agency (NiMet) and Nigerian ...