When one thinks of endangered species, the usual large animals spring to mind. Elephants, tigers, rhinos. And quite rightly they are the ones who get the lion’s share of the attention at the meeting of the standing committee of the Convention on International Trade in Endangered Species (CITES) held in Geneva last week. 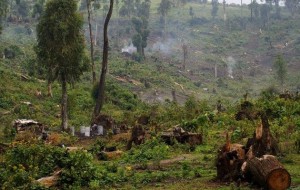 But trees are endangered too and that is the main reason Greenpeace took part as an observer. Afroromosia is one such endangered species. A beautiful tree found across west and central Africa it is a much prized tropical hardwood that can be found on many high-end furniture and fittings across the globe.

But such high demand comes at a price. As I sat listening to the debates in Geneva my mind was drawn to a time when I saw piles and piles of Afrormosia logs – many of them illegally felled – littered around a port in the Democratic Republic of Congo. The DRC is home to the vast majority of remaining Afrormosia stocks, but if such illegal logging activity continues at the pace it is now, then the tree will soon be over-exploited.

Aformosia is endangered because of ongoing international trade for its precious wood and has therefore been listed under the CITES Annex II since 1992. This means trade is not stopped altogether but is regulated.

This seemed to be implicitly sending a message to CITES to back up and leave the industry alone. But this should not happen hopefully if the body is serious about continuing its review of problem countries like the DRC and Laos for failures in implementation.

Data recently published by the think tank Chatham House revealed that 10 large logging companies are responsible for around 90% of all licensed harvesting of timber in the DRC and that two thirds of the resultant logs are from just four species: Sapele (Enthandophragma cylindricum), Wengé (Millettia laurentii), Iroko (Milicia excelsa) and Afrormosia (Pericopsis elata).

This suggests that the Congolese economic model is over-reliant on a just a handful of species from industrial logging concessions, a trend that usually leads to over harvesting. In Equateur and Oriental provinces, the situation is dire, with companies’ entire business models focused on trade in Afrormosia.

The second “surprise moment” of the week, was again sadly not that much of a surprise. A clear lack of enforcement from CITES against countries who fail to comply with their regulations is not uncommon. The organization is backed by a lot of sound science, but unfortunately is a global group that is highly politicized. This means hard language against on non-compliance is rare as it would impinge on the sovereignty of states.

The frustrating part of all of this is that while everyone knows enforcement of CITES regulations in the DRC is nothing short of a mess, it is very hard to do something because on paper all looks fine.

Nevertheless in Geneva concerned parties spoke up and encouraged the Congolese authorities to provide real evidence of trade quotas before the end of November this year and promised to debate if this trade was in fact detrimental to the survival of the species at next year’s plants committee meeting. It is an increasing occurrence that parties to CITES are not satisfied by paper promises alone.

What we feel should happen to really protect the Aformosia species is that the DRC immediately suspends all cutting of the tree and cancels all current authorizations to do so. Some companies who have been issued so-called CITES permits have informed the group’s Secretariat that these permits were “unaccounted for”. Legal action should be taken to ensure such fraud is stopped.

As far as CITES is concerned, there should be a country wide review or separate reviews for plants and animals and suspend all trade in CITES-listed species from DRC until compliance is guaranteed.

The same rigour should then be applied to any evidence the DRC provides regarding harvest and export rates. Check the paperwork, go out in to the forest and to the ports and see what is happening there, open up containers. That’s the only way to control the massive illegal trade in Afrormosia and other species from the DRC.

The IITA Youth Agripreneurs (IYA) is recognised as one...

There is no doubt that the sustainability of the...