Fall Armyworm: African choices before the next outbreak

September 9, 2018 Comments Off on Fall Armyworm: African choices before the next outbreak 658 Views

Farmers across Africa are reeling under huge losses linked to the devastation by an invasive specie called Fall Armyworm, also known as Spodoptera frugiperda. 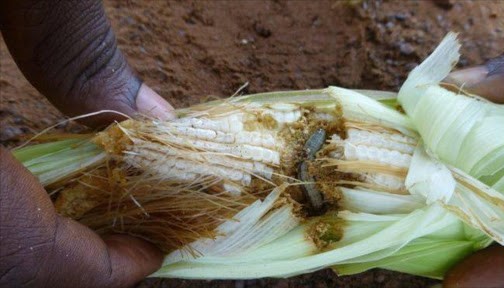 With origins in Eastern, and Central North America and in South America, the caterpillar has since 2016, found its way into 44 African countries, causing significant damage to maize crops with great potential for further spread and economic damage.

The extent of the destructive influence the invasive pest wrecks on maize alone is estimated to be between $2.5 and 6.2 billion per year, destabilising the livelihoods of around 300 million people.

These and many more reasons spurred experts attending the 2018 African Green Revolution Forum (AGRF2018) which began today in Kigali, Rwanda, to deliberate and explore ways of preventing or mitigating the next outbreak in Africa.

Fall armyworm as a global issue

Setting the scene at a session on building the resilience of Africa’s agriculture against invasive species, Dr. Dennis Rangi, Director General of the Centre for Agriculture and Biosciences International (CABI) identified continuing globalisation through increasing trade, travel, and transport of goods across borders as one of the factors facilitating the spread of invasive species, with increasing negative impacts.

The problem, according to him, “is global in scope and requires international cooperation to supplement the actions of governments; the private sector and organisations at national and local levels.”

The recent arrival of fall armyworm in India is a case in point. The caterpillar’s leap from Africa to India confirms the global nature of invasive species and the need for partnerships to tackle the pest.

Chief Scientist at the USAID Bureau for Food Security, Dr. Rob Bertram sees it in a different light.

To him, fall armyworm is a reminder that we live in a small world that is increasingly becoming smaller and we are more connected than ever. The answer therefore, “is more global connectedness through south-south and north-south learning; strengthening research networks; national level leadership; and a coherent regional approach to invasive species,” Dr. Bertram said.

Is Africa ready for the next outbreak?

However, transforming this approach into a reality in policy and practice remains a huge challenge in Africa as African famers usually find themselves trying to address the latest invasion, when the previous invasion is yet to be cleared.

They also lack adequate information and knowledge about preventing and detecting an invasion early enough.

To overcome these challenges, the CABI DG urged African countries to create a policy and regulatory environment that promote sustainable approaches in tackling invasive species; put in place a national invasive species strategy and action plan; and a sustainable investment plan.

Dr. May-Guri Saethre, Deputy Director General, Research for Development at International Institute for Tropical Agriculture (IITA), bemoaned the fact that the burden of handling and combating invasive species on a day-to-day manner is to a large extent left to the individual smallholders in Africa.

The way forward, according to her, lies in “working together, farmers, government, researchers and the private sector as current outbreaks are wake-up calls for firm action to protect Africa’s agriculture from the destructive impact of pest outbreaks.”

To prevent the next outbreak, technologies capable of stopping pest and disease entry into Africa by pre-emptive biological controls, horizon scanning and effective early warning systems are available and must be deployed to prevent establishment of new pest through coordinated response and eradication programmes,” Dr Saethre added.

Integrated Pest Management to the rescue?

Despite advances in technology, food production in Africa still largely lies in the hands of smallholder farmers. In the event of an outbreak of fall armyworm, their immediate and predictable response is the use of pesticides which they believe can suppress the invasive specie.

Meanwhile, environmentalists believe pesticides can be harmful, particularly to the environment as they affect non-targeted organisms like bees.

The answer according to Dr. Dennis Kyetere, Executive Director of African Agricultural Technology Foundation (AATF). is a resounding yes!

A well-defined IPM programme, according to him, usually based on prevention, monitoring, and control, offers the opportunity to eliminate or drastically reduce the use of pesticides, as well as minimise the toxicity of and exposure to any products which are used. An Africa-focused IPM will therefore utilise a variety of methods and techniques, including cultural, biological and structural strategies to control a multitude of pest problems including fall armyworm,” Dr. Kyetere said.

IPM is a broad-based approach that integrates practices for economic control of pests while aiming to suppress pest populations below the economic injury level (EIL).

The UN’s Food and Agriculture Organisation (FAO) defines IPM as “the careful consideration of all available pest control techniques and subsequent integration of appropriate measures that discourage the development of pest populations and keep pesticides and other interventions to levels that are economically justified and reduce or minimize risks to human health and the environment.”

IPM emphasises the growth of a healthy crop with the least possible disruption to agro-ecosystems and encourages natural pest control mechanisms.

Fall armyworm as an opportunity for Africa

In all, the experts were of the view that tackling fall armyworm in Africa requires a cocktail of solutions which does not exclude any of the aforementioned ideas but comprises enabling policy environment, science and evidence-based framework, research and development that encourages private sector investment, local knowledge sharing, information dissemination and surveillance.

The forum also agreed substantially with the Director General of the Rwandan Agriculture Board, Dr. Patrick Karangwa in his assertion that for Africa to feed itself, “agriculture must now be knowledge-intensive and technology-intensive.”

Indeed, the the presence of fall armyworm in Africa is both a crisis and an opportunity as a crisis is a terrible thing to waste – will Africa seize the opportunity?