The FADAMA III Additional Financing, a collaborative project of the World Bank and the Federal and State Governments, has been of immense benefits to farmers in Niger State.
This was disclosed by the Niger State Coordinator of the FADAMA III AF, Aliyu Usman Kutugi, who is an engineer.
Kutugi said the project has “greatly enhanced the capacities of farmers, increased their income, boosted the economy and made life more worthy of living”. 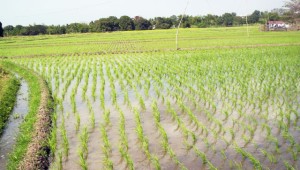 Niger State is presently cultivating 371,482 hectares of rice, mostly under the production season of rainfed.

Under the FADAMA III AF, 2,635 rice farmers with 7,100 ha land holding have been registered, 100 business plans for 10 production clusters were reviewed, out of which 49 were approved and currently being implemented.
Also, 10 facilitators and 1,000 rice farmers have been trained, while awareness has been created for agro dealers and cultivation of 120 ha nursery beds by five production clusters.
Kutugi, while informing that 20 tones of improved rice seeds (Faro 44) has been procured and distributed to rice farmers along with 480 litres of herbicides from certified agro dealers, also thanked the Niger State Government and the National FADAMA Team, led by Tayo Adewunmi, for “their continued support and cooperation, without which the FADAMA III AF would not have been implemented”.
Niger State has implemented six World Bank/FG assisted projects under the agricultural sector.
These are Bida Agricultural Development Project, Multi-State Agricultural Development Project, National Agricultural Technology Support Project, FADAMA II and III, and presently implementing FADAMA III AF, which have helped to develop farmers-managed irrigation schemes of 400 hectares and formal irrigation schemes of 1,500 ha.