September 22, 2021 Comments Off on Experts call for proper disposal of wastewater 280 Views

Experts have called for effective ways to dispose wastewater because, according to them, it is the leading cause of surface and ground water pollution.

Some environmental and health experts disclosed that safe disposal of wastewater has remained a serious problem in the country.

Mr Sylvester Arogundade, who is of the Earth and Environment Initiative, noted that indiscriminate wastewater disposal had the potential of causing groundwater and surface water contamination, leading to environmental pollution.

Wastewater, also known as sewage water, is the polluted form of water generated through rainwater runoff and human activities, such as the use of pesticides, harmful medical wastes and toxic substances.

“It is estimated that the country will experience rapid growth in population, urbanisation, agricultural and industrial development.

ALSO READ:  Man and fossil fuel: Relationship that should have never been

“This growth will also result in corresponding increase in wastewater generation in urban areas raising concerns about environmental pollution resulting from the quality of wastewater disposed to sensitive environment.

“The effects of untreated or poorly treated wastewater can be detrimental to public health, the environment and the economy.”

The expert noted that tiers of government ought to seek out measures to end problems of wastewater, saying delay in doing so may increase water-related diseases and rise in epidemics.

“From the side of the federal, state and local governments, wastewater is still uncontrolled and unregulated.

“This means that we (the citizens) create and will have to solve our own wastewater problems. When we fail to, water-related diseases, and epidemics are inevitable.”

She said a large number of products used at home contained hazardous substances which could contaminate ground or surface water, saying people must limit the use of pesticides and fertilisers while practicing farming.

Ikpeazu listed effects of water pollution to include; the destruction of biodiversity, contamination of food chain, low access to potable water, diseases and infant mortality.

“Groundwater can be contaminated by poorly or untreated household wastewater, which poses dangers to drinking water and to the environment.

“Once water is polluted or contaminated, it is difficult and costly to remove the pollutants.

“Malfunctioning septic tanks could release bacteria, viruses and chemicals to water ways, the average household septic system should be inspected at least every three years by a professional’’.

She, however, called for safe treatment of wastewater, so as to make it useful for irrigation and energy production, saying the UN had predicted that half of the world’s population would live in water-scare areas by 2025. 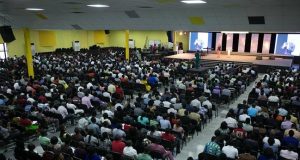