How EU MRV project has impacted Nigeria, by Jibril

January 3, 2018 Comments Off on How EU MRV project has impacted Nigeria, by Jibril 673 Views 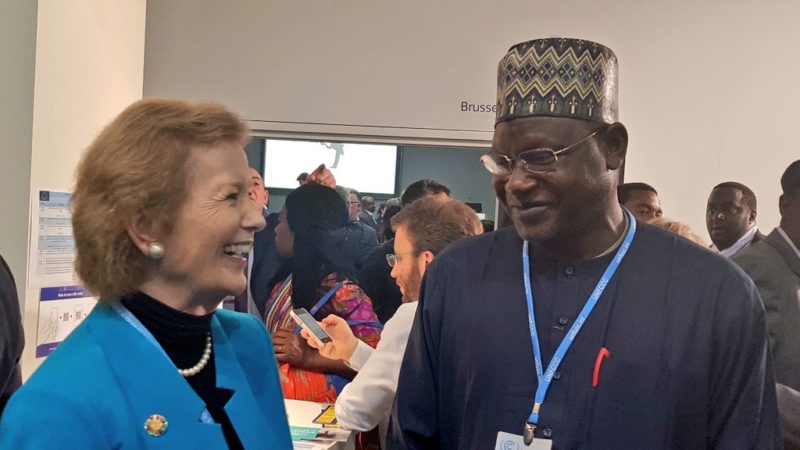 The initiative has likewise helped to show the government and people how Nigeria is progressing towards adapting to and mitigating climate change.

Environment Minister of State, Ibrahim Usman Jibril, made the submission during the EU MRV Project Side-Event at the 23rd Session of the Conference of the Parties (COP23) to the United Nations Framework Convention on Climate Change (UNFCCC) that held last November in Bonn, Germany.

According to the minister, the project has helped the nation to identify critical ares towards achieving these tasks, most notably in how to strengthen institutional set-up between the various ministries, departments and agencies (MDAs) and other stakeholders to accelerate and improve the flow of climate data and information.

“This will enable us better to undertake more detailed greenhouse gas (GHG) inventories, identify areas where mitigation actions can and should be taken, and to improve our ability to set out policies and plans, both for the Nationally Determined Contributions (NDCs) called for in the Paris Accord, as well as to help set the domestic framework for investments in both human resources (capacity building) and for setting the policies and plans that will accelerate our work in addressing climate change,” the minister stated.

He expressed appreciation to the EU for providing the nation with more building blocks to achieve set climate change objectives, saying that they help in several ways to accelerate work. The minister added however that while foundations for climate change MRV have been strengthened through the assistance of the European Commission through the project, “we have much more to do as we go forward”.

A key area of focus going forward, for example, is to strengthen and expand the capacity of the Department of Climate Change (DCC) (in the Federal Ministry of Environment), both in terms of human skills, as well as in terms of the hardware and software necessary to compile, process, analyse and report on climate change. He added that the ministry has built an extensive network of Climate Desks in every key MDA and given them the basics in training to gather, process and transmit data to the DCC.

But he believes that they can go much further in this area.

His words: “More personnel in both our DCC and in our federal Climate Desks in all key MDAs need to receive additional and on-going training. We need to develop the information exchange system between the DCC and these Climate Desks so that climate change data and information flow continuously to meet our international and national obligations. We need further assistance from the EU, from our other bilateral and multilateral development partners to help us accelerate our work and strengthen our long-term capacity in climate change MRV.

“We look to our partners to provide us specific assistance in capacity building and climate change data and information collection, processing and reporting to build upon the improved foundations provided by this excellent EU project. With this additional assistance, we can build the stronger, deeper foundations to build further our national and sub-national capacities for a sustainable and efficient National MRV System Framework.”

The EU MRV in Africa Project, funded by the European Commission’s Directorate-General for Climate Action (DG-Clima), has been underway for about two years. The project has been working with the Federal Ministry of Environment since February 2016 and has been implemented in two phases.

During the first phase of the project, the team undertook a fact-finding mission and held a national stakeholders’ workshop in early 2016 to enable the European Commission to assess Nigeria’s needs in the area of national greenhouse gas (GHG) inventories and MRV. The first phase, it was gathered, enabled the project to design Phase 2 in a manner that addressed the nation’s specific capacity needs in the area of national GHG inventory preparation, and preparation of national policies of the NDCs, National Communications (NCs) and Biennial Update Reports (BURs), which the nation is committed to present to the UNFCCC and the Parties to the Convention on a regular basis.