In support of the Campus-Green Initiative of the Alex Ekwueme Federal University Ndufu-Alike Ikwo, Ebonyi State, the Association of Nigerian Authors (ANA) led by the National President, Mallam Abdullahi Denja, has joined the Vice-Chancellor, Professor Chinedum Nwajiuba and other members of staff to plant trees in the university. 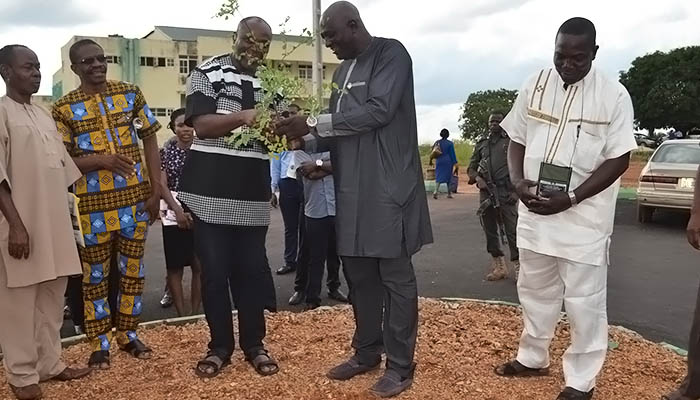 Vice-Chancellor, Professor Chinedum Nwajiuba, handing over a tree to the ANA National President, Mallam Abdullahi Denja, during the event

Members of the association were in the university for their 2018 Annual International Conference which the institution hosted to awaken the creative consciousness of Nigerians, especially that of the university staff and students.

Commending the Campus-green Initiative, Mallam Denja noted that he was awed by the serenity of the university, adding that the tree planting scheme would indeed make the institution more beautiful in time to come. He further thanked the Vice-Chancellor for his thoughtfulness and creativity in putting in place such a programme that, according to him, eventually turn the university to one of the best campuses in the country. He also expressed his happiness for the opportunity given him to plant a tree in the university, praying that it would grow to provide shades for future generation.

Also speaking during the event, the Secretary of the association, Dr. Ofonime Inyang, stated that the tree planting campaign was a symbol of everything good in the university in particular and the nation in general, adding that it was also a sign of a sustained partnership between ANA and the university. He further commended the infrastructural development going on in the university, stressing that the institution was blessed to have someone like Professor Nwajiuba as its Vice-Chancellor.

Five other members of the association also participated in the tree planting exercise; each expressing their delight in having the privilege of planting a tree in the university.

Earlier, while addressing the ANA members, the Vice-Chancellor shared his vision of having a green and beautiful campus that would be the cynosure of all eyes in Nigeria, adding that the initiative was also a way of giving back to the new and future generation what the society had given to the older generation. He decried the present situation where schools are built without trees unlike the schools the older generation attended while growing up that had fruit trees everywhere.

He further promised those that planted trees during the event that their names would be eked on it for future references and as a sign of honour to each of them.