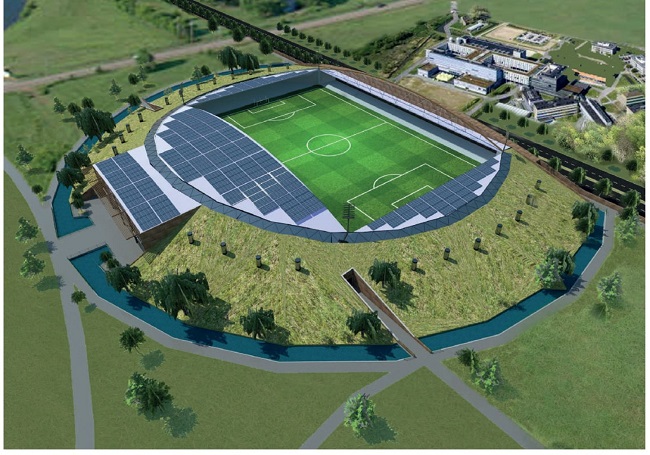 An impression of the new Forest Green Rovers FC Stadium

Rovers, which is currently eighth in the fourth tier of English soccer, has won admirers from around the world, thanks to the soccer outfit’s green ethos, becoming the first vegan club in England and the first to become carbon neutral.

“We’re pretty chuffed to have this recognition from the UN for our work in promoting sustainability through sport,” Rovers chairman, Dale Vince, said.

Apart from a vegan menu, the club has also incorporated a host of eco-positive features, including an organic pitch, electric car chargers and a solar powered robot lawnmower.

“Plenty of people doubted we could make this improbable combination of a football club and the environment work, but it’s proven to be a powerful combination,” Vince added.

Rovers, which is based in the southwest county of Gloucestershire, is now looking to build the world’s first modern-age wooden soccer stadium.

The UN award was presented at the Climate Week NYC, one of the key sustainability summits in the international calendar in New York.

Rovers will now travel to the next UN climate change conference in Katowice, Poland in December.

ALSO READ:  ‘Houston was a hurricane disaster waiting to happen’