It is 10am on Saturday and Odonla Community, a suburb of Ikorodu Local Government Area of Lagos is awake, and the neighbourhood is bustling with human activities. The atmosphere has however become cloudy after another night of steel production by factories located around the community. But it is not a cloud for rain, it is a pollution-induced cloud.

The factories’ chimneys puff out varying colours of fumes containing flue dust. Slag, a solid waste which contains toxins, including Nickel, Cadmium, Chromium and Strontium, is dumped in the host community.

Years of degrading the environment has resulted in unclean air giving a murky odour of a cocktail of chemicals. There is a constant urge to wipe the eyes to relieve the discomfort that follows contact with toxic particles in the air. Some residents fear that it is just a matter of time before the slags dumped in the community get to the groundwater.

“If you come to this area around 12am, there will be so much smoke everywhere that you will find it hard to see buildings. Many times, we will spread clothes outside and it will have black stains. We know that it (fumes) is what we breathe in,” a house owner and Chairman of one of the Landlord Associations in the community, who identified himself as Honourable, said.

“I was placed on medication after I complained of irritation in my throat and black things in my sputum.”

Six times during the two hours this reporter waited to see Honourable, yellow coloured smoke with an offensive odour emerged from Top Steel Limited’s premises and white fume appeared from Sun Flag Steel’s facility. The fumes followed the direction of the wind and spread into the community.

Honourable said his members had written to the Lagos State Ministry of Environment but no action was taken and alleged that state officials ignored them because may have been influenced by the companies.

“When one of their bosses said we should bring video evidence, I and one man would climb that place,” he said pointing at a scaffold about 13-feet high. “We sent many videos, but nothing happened. It is part of the corruption in the land.”

No one is safe as residents living at least two kilometres away from the steel manufacturing plants suffer from the pollution.

“We also perceive the smoke and the chemicals from the factories. It is really bad especially early in the morning when one is going to work and late in the night,” said Mrs Cecilia Moradeun, who lives some distance from the factories.

Chromium, Arsenic, Lead are some of the known elements people are exposed to in terms of the pollution through fumes by the steel producing companies. Prolonged exposure to these pollutants could lead to cancer of the lungs, kidney damage and pregnant women living in that area are exposing their babies to Lead because when it is inhaled, it could get across the placenta to the baby that is forming to cause brain damage and interferes with the development of the baby, said Dr Chinyere Uzodinma, a Community Health expert and Consultant Paediatrician.

“One thing common to all of them (elements) is that they all cause respiratory inflammation,” Dr Uzodinma said. “The respiratory system is a connected continuous tract from the nostrils to the throat down and then to the lungs. Somewhere along this line, the eyes and the ears connect to them. So, irritation of the airways also includes irritation of the eyes and ears.”

Despite the Lagos State Environmental Law enforced by the Lagos State Environmental Protection Agency (LASEPA), considering the discharge of “inadequately filtered and purified gaseous waste or gases containing hazardous substances which could cause pollution and harm” an offence, many factories continue to emit dangerous gases containing particulate matter. It raises concerns that the Agency has been found wanting in performing its monitoring and enforcement responsibilities of factories in the Industrial area as residents said that some of the companies had been existing for at least 10 years.

Harmful Waste Bad for Factory But Good for Host Community

According to the Ministry of Mines and Steel Development quoting 2017 statistics of the World Steel Association, of the 1,689 million tons of global production of steel, Africa produced 15 million tonnes and Nigeria accounted for 100 tons. For every production of a ton of steel, nearly 150 kg of slag is generated. It is not clear how much of the steel slag generated in Nigeria is recycled owing to unavailability of data.

Haphazard disposal of the toxic crystal-like material into host communities by the factories suggests that they are not recycled, and the factories were established without any environmentally friendly plans about what to do with it.

Environmental laws in Lagos dictate that the discharge of any substances into the environment is not allowed without a permit. However, common sight of the toxic slag in Odonla and surrounding communities shows that LASEPA has not been performing it’s statutory function of participating in the proper disposal of the toxic waste of the steel milling companies.

Within the community, residents have found use for the toxic waste. While some use it to prevent erosion, others fill potholes on the only tarred road into the community with it. But the toxic slag finds a way to destroy the environment; the growth of some plants where it is dumped is either stunted or they die.

A Micro Economy Around Environment Degradation

Every heap of slag dumped in the community attracts both men and women who dig into it with hoes looking for pieces of scrap metal to sell.

The pickers of the scrap work in different groups of three and five people for merchants who buy the toxic waste from the factory and dump it indiscriminately.

“After we pick scrap from the heap, our boss pays us between three to five thousand naira and we share it equally. Each person makes up to between 1,000 and 1500,” said Iya Gbogbo as she digs through a heap with three other women.

She said it was profitable because they make more money daily, than people who sell goods in shops and earnings from picking the metal scraps is used to pay the fees of one of her children studying at a tertiary institution.

Although many of the scrap pickers are aware that the slag has dangerous chemicals, they do not use safety equipment including nose masks and hand gloves.

“We know it has chemicals. Personally, I don’t like using the mask because I don’t breathe well. But when I get home, I drink lemon and take my bath with hot water and it works,” another woman in the group who declined to disclose her name said.

They agreed that the slag is toxic to the environment, but said that the waste was usually evacuated.

But that is not true. Apart from old toxic waste dumped days and months ago around them, within the community, many streets have places where the slags had been disposed of, posing the risk of toxins being absorbed gradually by the subsurface into the groundwater when rain falls. Some slags which are too big and too hard to be broken are abandoned.

“It is not possible for the toxic chemicals in the waste to get into the soil and reach the groundwater. Do you know how many pipes are used when boreholes are constructed?” another woman in the group who had been quiet suddenly objected.

A Hydrogeology and Engineering Geologist, Newton Ewaensiha, said it was possible for toxins to reach the groundwater especially in areas where the subsurface is porous — it has no seal protecting it from surface water.

Industries Obligated to Protect Human Lives and the Environment

The Programmes Director, Environment Rights Action at the Friends of the Earth Nigeria, Mike Karikpo, said it was necessary for the Lagos State Government to act by compelling the factories to either upscale their production process in order to reduce emissions or close down because human lives were at risk.

“Air pollution from soot or particulate matter is dangerous to the respiratory system. Children are at more risk because they play on the floor, increasing the risk of touching the soot which has settled on the ground,” Mr Karikpo said.

Discouraged by the aloofness of environmental law enforcement officials, residents who are under threat of being evicted from the land they had lived for years because it is supposedly an industrial area — even though they had been living there before the establishment of factories — are beat-down from approaching the court to compel the factories to stop the pollution.

“They (government officials and factories) told us that we were staying in an industrial area and so there was not much we could do,” a landlord who asked to not be named said. “We endure the pollution but some of us have resorted to planting trees. You can see my own.”

But Mr Karikpo disagrees that residents living close to factories who pollute the environment do not have the right to complain. He believes that industrial areas have residential sections and industries have the obligation to protect the environment and humans living around them.

A Mining Engineer and Researcher at the Federal University of Technology (FUTA), Dr Ola-Omole Omoyemi, posited that steel production with minimal pollution was achievable and factories should demonstrate their ability to control all forms of waste before being licenced to operate.

“There are ways the particulate matter can be captured,” Dr Omoyemi said. “The companies can install mechanical collectors, including dust cyclones to capture the pollutants.”

The traditional ruler of the community, Otunba Afunwape of Odonla, said he was not involved in environmental issues with the companies. Other questions put to him were not answered. He hung up the phone.

The General Manager of the Lagos State Environmental Protection Agency (LASEPA), Dolapo Fasawe, said that the issue would be investigated, and appropriate actions would be taken.

“Right now, we have issues of climate crises all over the world including heat waves, forest fires, flooding. So, to add pollution to it means that we are destroying the environment that keeps us alive,” Mr Karikpo said.

“The fact is that the ecosystem of that area is being destroyed. Residents have the fundamental right to life and to live in dignity. So, if the government refuses to act, the community should act by going court.” 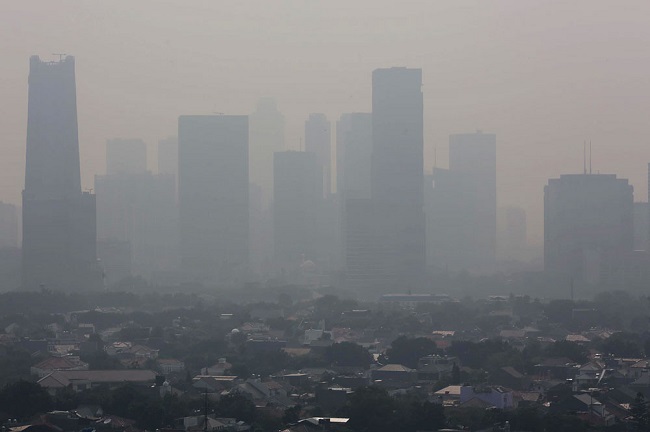