May 24, 2017 Comments Off on Deutsche Bank partners with GCF on climate action 965 Views

Deutsche Bank in London on Tuesday, May 23, 2017 signed an Accreditation Master Agreement (AMA) with the Green Climate Fund (GCF), enabling the Bank to receive and use GCF capital to raise further funds from private sector investors to support action on climate change. 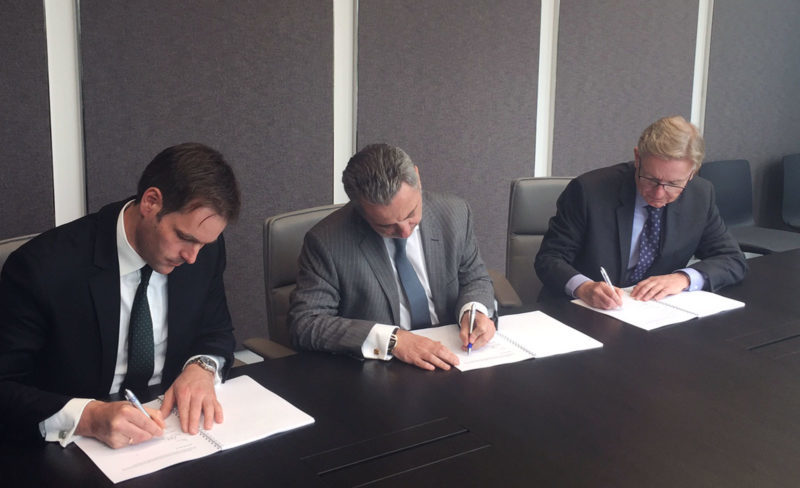 The agreement was signed by Nicolas Moreau, Head of Deutsche Asset Management and member of the Management Board of Deutsche Bank AG, and Executive Director of the GCF, Howard Bamsey

The agreement was signed by Nicolas Moreau, Head of Deutsche Asset Management and member of the Management Board of Deutsche Bank AG, and Executive Director of the GCF, Howard Bamsey.

“We are pleased to sign this agreement in order to work with GCF to mobilise private sector capital and increase contributions to climate financing for adaptation and greenhouse gas mitigation measures in developing countries,” said Nicolas Moreau.

The GCF works through a wide range of Accredited Entities to channel its resources to projects and programmes. Deutsche Bank is the second commercial bank to sign an Accreditation Master Agreement with GCF.

“This signature marks a milestone for GCF as it unlocks the broad international expertise of Deutsche Bank in directing private investment flows toward climate action,” Mr. Bamsey said. “It follows from GCF’s recognition of the essential role of the private sector in filling climate finance gaps.”

Accreditation Master Agreements are critical as they deepen ties between the Green Climate Fund and its partners, and act as a prerequisite for the disbursement of GCF-approved climate projects.

The GCF has already approved the first funding proposal from Deutsche Bank at its 14th meeting in Songdo, South Korea, in October 2016. The Universal Green Energy Access Programme combines capital from GCF with that of private sector investors to finance renewable electricity access for nearly half a million people and small and medium sized enterprises in cooperation with local banks in Africa.

The GCF’s anchor investment of $78.4 million allows Sustainable Investments, the group within Deutsche Asset Management that manages environmental and social assets, to raise a total of $300 million in capital.

The proposal has been endorsed by the Governments of Benin, Kenya, Namibia, Nigeria and Tanzania, which is where the programme will initially focus investments in the first three years. The signing of the Accreditation Master Agreement marks a major step towards implementation of this programme.

The GCF mission is to expand collective human action to respond to climate change. The Fund aims to mobilise funding at scale to invest in low-emission and climate-resilient development in emerging economies and frontier markets. GCF provides loans, equity, guarantees, and grants to private sector corporations in developing countries. Supported by close to 200 governments, the Fund is the largest dedicated international climate fund. GCF is mandated to engage with private sector investors, developers, entrepreneurs, corporations, and small and medium sized enterprises in all developing countries.