The 4th of November 2016 is a day which I hold dear in my heart and remember vividly, this is because it was my birthday and most especially, the Paris Agreement entered into force. What a coincidence you must say, but to me it was one of the gifts I got on this special day. 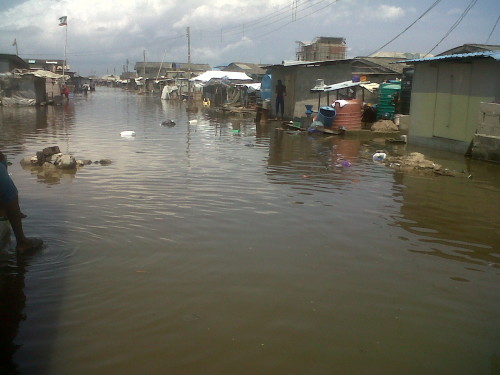 A flooded street in Okun-Alfa community in Lagos

Nigeria is one out of the 197 Parties that are signatories to the Paris Agreement and 143 to have ratified the convention, thereby committing to reducing greenhouse gas emissions unconditionally by 20% and conditionally by 45%. Nigeria is considering 30% energy efficiency in industries, homes, businesses and vehicles, and increased use of natural gas in generators and renewable energy. Although ratifying this depository is not enough, there is an urgent need to cut emissions of greenhouse gases as soon as possible with regards to the 1.5°c limit.

The president of the second-largest polluter in the world, USA, (alongside China represents 37.98% of global carbon emissions) recently signed an executive order to boost domestic energy production in the form of fossil fuels. This translates to signing an executive death warrant for millions of vulnerable people especially girls, women and children living in communities like mine in Africa who have low resilience to climate impacts and disasters. Climate change and global warming are scientifically established facts and cannot be referred to as a hoax; its impact is visible and felt globally.

Climate change poses great challenge to community development in Nigeria and Nigerians are not excluded from the threats and impacts of global warming. Nigeria lies wholly within the tropical zone and is faced by a highly variable climate, making the country more vulnerable to health risks as climate change alters rainfall and temperature patterns.  In a World Health Organisation (WHO) World Malaria Report 2015, it is reported that approximately 438,000 deaths were attributed to malaria, particularly in sub-Saharan Africa, where an estimated 90% of all malaria deaths occur. In Nigeria, an estimated 100 million malaria cases with over 300,000 deaths per year occur, contributing to an estimated 11% of maternal mortality. With the rise in temperature in Nigeria, there has been an outbreak of Cerebro Spinal Meningitis claiming about 438 deaths in 19 states during the first quarter of 2017.

The extreme dry spells and prolonged drought in Northern Nigeria has made nomadic cattle rearers migrate towards the Middle Belt, South and East of the country in search of green pastures for their cattle. This has resulted in bloody onslaughts between peasant farmers and cattle rearers which have left thousands of women and children dead, potential leaders and the future of Nigeria. Climate change has impacted my community negatively, displacing hundreds of people and left communities in mourning after clashes over shrinking spaces.

In Nigeria, an estimated 20 million people live along the coastal zone with about 90% of industries located in this area; most of the economic activities that form the backbone of the country’s economy is located within the coastal zone. It is composed of a variety of ecosystems, including lagoons, deltas, mountains, wetlands, mangroves, coral reefs, and shelf zones. Climate change has adversely affected urban and rural coastal communities causing rise in sea levels, intense rainfall, storm surges resulting to flooding and erosion. The Niger Delta produces the oil wealth that accounts for the bulk of Nigeria’s foreign earnings; it is also a conflict prone area because of industrial pollution from oil spills and discharge of domestic untreated wastes which pollutes large areas of the coast, including lagoons and near-shore areas. According to Aniefiok  et al (2013), Nigeria has 123 flaring sites in the Niger Delta region of the country and  increasing exploitation of coastal resources-utilising conflicting exploitation methods-have led to coastal degradation.

So many environmental problems plague the coastal zone of the country despite the rich mineral deposits, carbon sooth covers the air and water sources as well as farm lands are polluted. This makes the area inhabitable for the people of the communities as their sources of livelihood is lost due to the impacts of climate change, agitation and violence becomes their resort to fighting back.  This area have major and rapidly expanding cities on the coast with most communities having low adaptive capacity when hit by climate disasters, for every 1 meter rise in sea level, more than three million people are at risk of being displaced and a potentially grave environmental refugee migration crisis would occur.

It is key to state that Nigeria and all signatories to the Paris Agreement must make haste to ensure that they leverage their collective power to hold the increase in the global average temperature to well below 2 °C above pre-industrial levels and to pursue efforts to limit the temperature increase to 1.5 °C above pre-industrial levels, to significantly reduce the risks and impacts of climate change.

The economic, social and political cost of climate change cannot be quantified; hence 1.5°c is not negotiable. It is dire and compulsory for the survival of millions of vulnerable poor people living in communities of developing countries like Nigeria. The government of Nigeria should see to the rapid clean-up of the Niger Delta region and also take pragmatic steps in ensuring that it stops gas flaring, invest in renewable energy, climate-smart agriculture and climate-resilient development. She must also set standards for appliances, transportation vehicles, generators and buildings if it hopes to achieve the sustainable goal 13 and attain the 1.5 set target.

Yes I have a 1.5 story to tell, sorry it’s not a rosy or fairy tale. It is a story of our harsh reality and how achieving 1.5°c is instrumental to the peace, growth and sustainable development of millions of people spread across communities in Nigeria.