Dangote to spend $1b on rice cultivation

The Dangote Group has disclosed that it is investing $1 billion in rice cultivation in five states to boost food self-sufficiency. 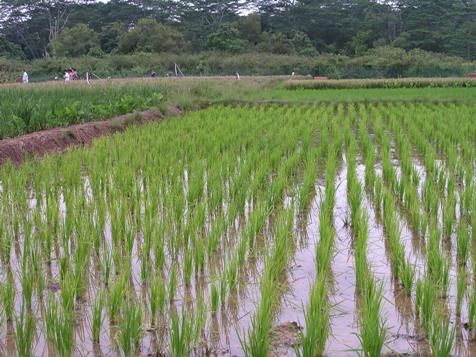 The organisation made the disclosure on Monday, May 29, 2017 at the just concluded 2017 Gateway Trade Fair, which was held in Abeokuta, and in respect of which it emerged as the second most patronised exhibitor.

To mark its Day at the Fair, a subsidiary of the Group, Dangote Cement, gave out several tools and implements to the block makers in Ogun State in appreciation of their patronages. Tools such as wheel barrowers, shovels, umbrellas and hand gloves were donated to block makers who assembled from different areas of the state.

During the 10-day trade fair, Dangote Flour gave customers and participants free sampling of its new pasta products. The wet sampling made the Group’s pavilion the centre of activities at the Fair as participants trooped in for their daily meal. Customers were rewarded with branded coolers, kitchen aprons, exercise books and customised ladles.

Commending Dangote Group for its sponsorship and participation at the Fair, President of Ogun State Chamber of Commerce, Industry, Mines and Agriculture (OGUNCCIMA), Mrs. Adesola Adebutu, said the support given by the Group went a long way in making the staging of the Fair a success.

She commended the Pan African Conglomerate for its giant strides in economic development of the country through massive investments in several sectors of the economy describing the feat as worthy of emulation by other Nigerians.

A director of Dangote Group, Tunde Mabogunje, who represented the Group at the special day, said that the partnership with OGUNCCIMA is beneficial as Ogun State is the host of the 12 mmtpa Dangote Cement Plant, Ibese, the second largest cement plant in Nigeria.

Dangote Cement, he said, “through the plant, provides thousands of direct and indirect jobs in the state. As a responsible corporate citizen, we participate fully in all events and activities designed to drive social and economic welfare of the state.”

He described the theme for this year’s Trade Fair: “Promoting Agricultural Value Chain through SMEs for Nigeria Economic Recovery” as being apt, given the nation is now paying attention to Agriculture, which has the potential of becoming the major driver of the economy instead of oil, pointing out that in line with the theme the Group is at the forefront of job creation and is the largest employer of labour outside government.

Mabogunje stated: “We have been contributing our quota to the growth and development of the Nigerian economy. Towards aiding agriculture, we are building a fertiliser plant in the Lekki Free Trade Zone, Lagos State. When completed, farmers will have regular access to fertiliser for their farming activities. The delays and disruptions experienced in waiting for imported fertiliser will cease.”

“We are investing about $1 billion in rice cultivation. We have an outgrowers scheme where thousands of farmers are empowered with improved seeds and items needed to cultivate rice.”

Previous: 87 countries should account for disaster losses by 2020 – UNISDR summit
Next: How Nigeria strives to achieve biodiversity conservation targets, by CBD