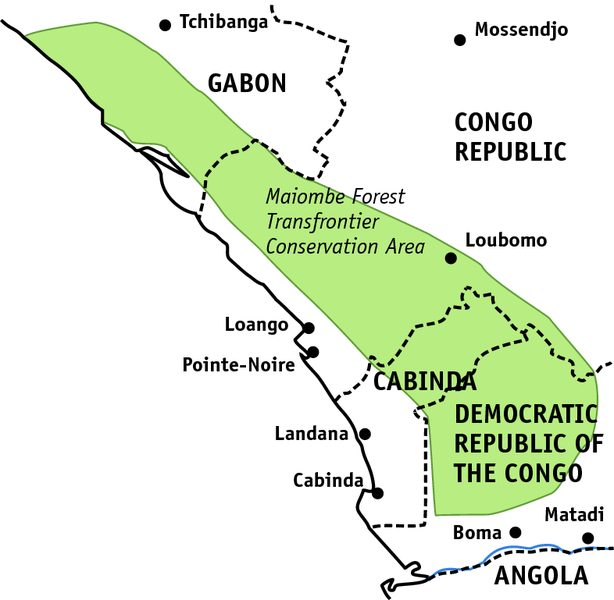 The Mayombe Forest Transboundary Initiative stretches across Angola, Congo, the Democratic Republic of the Congo and Gabon

The Mayombe forest has the largest distribution of a large variety of unique flora and fauna, including species of global importance such as the central chimpanzee, the western lowland gorilla, the forest elephant and many other species part of the Guineo-Congolian regional centre of endemism.

Despite its ecological importance, the southern part of Mayombe forest has been subjected to decades of intensive degradation, through the unsustainable use of natural resources. Communities around the forest rely on subsistence farming, small-scale husbandry, logging, poaching and fishing for their livelihood. The forest gets very little protection, which results in long-standing transboundary issues.

It’s against this backdrop that Angola, Congo, DR Congo and Gabon have agreed to cooperate to resolve these issues. The renewed commitment calls for the engagement of all stakeholders to discuss the way forward in the sustainable management and rehabilitation of the ecosystem’s integrity and biodiversity.

Since 2008, UN Environment and the International Union for Conservation of Nature (IUCN) have assisted Angola, Congo, and DR Congo to come up with a cooperation agreement for the management of the Mayombe forest transboundary ecosystem. This effort culminated in the development and approval of a transboundary management plan in 2013. Due to the lack of progress in the implementation of the plan, UN Environment brought together the parties involved during the 22nd United Nations Framework Convention on Climate Change, held in 2016 in Marrakesh (Morocco), to discuss the revitalisation of the initiative.

Pursuant to the recommendations of this first meeting, the four countries met again at the Global Environment Facility Council meeting held in Vietnam in July 2018 and agreed to:

According to the Head of UN Environment, Mr. Erik Solheim, this is a huge positive step.

Expressing his full satisfaction for this achievement, Mr. Jacques Denis TSANGA, President of the African Ministerial Conference of the Environment, Minister of Water and Forests in charge of Environment and Sustainable Development of Gabon, and Chair of the committee of Ministers on the Mayombe Forest Initiative, stated: “The desire to preserve a healthy environment for future generations is worthy. We have the responsibility to do so collectively and with the political will affirmed with our partners. At a moment when the Congo Basin has the same attention as the Amazon, we can only appreciate the convening power of UN Environment, which has managed to move us efficiently towards this huge step.”

On behalf of the Government of the Democratic Republic of the Congo, Dr. Amy Ambatobe Nyongolo, Minister of the Environment and Sustainable Development, added: “The Democratic Republic of Congo welcomes the work of the Committee of Ministers on the Mayombe Forest Transboundary Initiative, which took place in Niang, Vietnam. The results, achieved in such a short time, would not have been possible without the dynamism and persistence of UN Environment. We are grateful and count on your continued support.”