Bothered by growing calls to postpone the 26th Session of the Conference of the Parties (COP26) to the United Nations Framework Convention on Climate Change (UNFCCC) scheduled to take place in Glasgow in November 2021, the Pan-African Climate Justice Alliance (PACJA) has said that the global conference should be held in person as planned and that the UK government takes every measure to ensure a safe and meaningful debate.

PACJA was supported in the call by over 1,000 African and southern climate justice activists, advocates and scholars attending the Nairobi Summer School on Climate Justice.

The group also urges the UK to take responsibility for ensuring the unrestricted participation of delegates from Africa and the Global South – especially of women and young people.

“We thus welcome the recent measures to waive mandatory quarantine costs for delegates from the so-called COVID-19 red list, only as an important first step,” said Dr. Mithika Mwenda, executive director of PACJA in a statement made available to EnviroNews.

He added: “We are deeply concerned by calls to postpone COP26 scheduled to take place in Glasgow in November 2021. That would be the second year in a row that critical negotiations, decisions, and actions are put off, while vulnerable countries in Africa and the rest of the global south continue to face ever-worsening impacts of climate change. The past two years have shown that the world is incapable of summoning the political will needed to take urgent and bold decisions to address the climate crisis without physical meetings.”

According to him, “it will be inexpedient, if not reckless, to further delay debates and decisions needed to scale up climate ambition globally, considering the recent IPCC report, which concludes that global warming is speeding up, particularly in Africa and warns that the window of opportunity to prevent catastrophic climate change is fast narrowing”.

Mwenda went on: “While the global COVID-19 situation remains worrisome, we maintain that the climate crisis poses an even greater existential threat, which aggravates and becomes costlier to address with every year of inaction. In early September, Kenya declared a national disaster after a sharp drop in rainfall led the drought in semi-arid and arid parts of the country.

“Similar droughts are affecting the entire Horn of Africa, as well as Madagascar, where the worst drought in 40 years have triggered widespread famine and malnutrition. Elsewhere, Algeria and Tunisia are still reeling out of the impact of deadly wildfires orchestrated by a sweep of heat waves.

“COVID-19 has illustrated that a range of vulnerabilities expose Africa not only to the adverse effects of extreme climate but also to multiple stressors acting together to worsen already precarious development outcomes.

“We recall that Africa is today among the regions of the world most vulnerable to the impacts of climate change, largely thanks to historical inequalities in the distribution of global wealth and decision making that undermines its voice, unique circumstances and needs. Calls for the postponement of COP26, even if we understand the concerns raised, fail to account for African priorities and the urgency to strengthen resilience on the continent, which already suffers a range of injustices. The lack of broad consultation within Africa reinforces the procedural injustices that the continent and other developing countries suffer, not only in States-led climate dialogue processes but also within the global civil society.”

While maintaining that COP26 makes significant progress on fully addressing Africa’s special needs and circumstances through thorough debates and decisions, the PACJA boss stressed that the UK must ensure that COP26 is not remembered as another COP that failed Africa.

The group likewise wants Parties to work to raise mitigation and adaptation ambition that reflects the finding of the recent IPCC report; particularly the risk of reinforcing the current disproportionate vulnerability of Africa to weather and climate extremes.

Furthermore, industrialised countries were charged to close the existing climate finance gap and scale up resources to address adaptation needs in Africa and support mitigation actions.

“In particularly, COP26 should decide on a plan to deliver and scale up the $100 billion climate finance for developing countries post 2020,” Mwenda noted, demanding that the global community depoliticises the climate crisis “and treat it as what it truly is – an existential threat to people and natural systems all over the world”.

He wants COVID-19 recovery plans to include measures to address the climate emergency to build more resilient societies and acknowledge that both crises are inherently twined and cannot be addressed separately.

The UK Presidency was asked to take all measures that are required to address the mutual suspicion and mistrust that have so far characterised the climate debate.

“A starting point is introducing a transitional justice approach that will help humankind reconcile itself with the peoples of the world and Mother Earth,” he said.

On Tuesday, September 7, Climate Action Network (CAN), a network of over1,500 civil society organisations, called for the postponement of COP26, saying that a safe, inclusive and just conference was impossible given the failure to support access to vaccines to millions of people in poor countries.

Last week, the Least Developed Countries (LDCs) Group expressed similar sentiments, saying that it is concerned about the logistics of its members getting to Glasgow in November because “there are so many barriers to participation, and the uncertainty is causing a great deal of concern amongst our LDC delegates”. 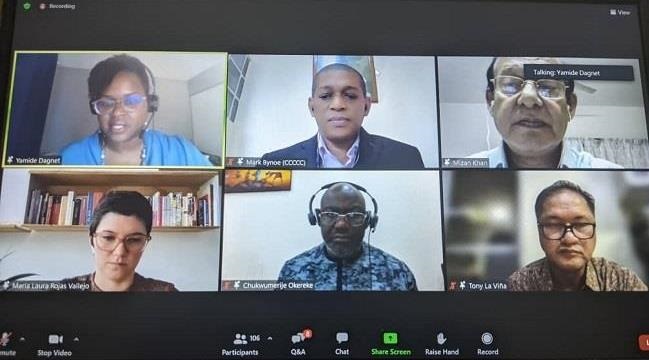