COP26: Nigeria and the net-zero intoxication

November 2, 2021 Comments Off on COP26: Nigeria and the net-zero intoxication 456 Views

The accolades the Federal Government of Nigeria is according net-zero continues to bemuse the Nigeria and global climate justice community. Comments credited to top government officials paint the picture that the current administration may have bought the false and scientifically unproven net zero initiative that Shell and other Big Polluters contorted to remain in business while the climate continues to suffer.

His words: “Nigeria is committed to the Paris Agreement on climate change and has resolutely compiled all her national determined contributions under the Paris Agreement and updated those commitments in our new Energy Transition Plan. Talks are essentially ongoing on the process of getting to NET-ZERO by 2050 and how significant it is for the country to have fair access.’’

He even went on to advance industry language when he remarked: “The goal of the energy transition should be to achieve reliable net-zero energy systems to power prosperous, inclusive economies.’’

The concern expressed by Prof. Osinbajo on the plans of wealthier countries to reduce climate finance to developing countries and initiate advocacy for defunding gas investments affirms the unwise dependence of Nigeria on foreign climate change decisions and reflects the systemic incoherence among existing policies, leaving the masses behind to contend with poverty and other consequences of global warming.

The government needs to know that net-zero isn’t an option worth considering; it is a hurriedly prepared distraction by the fossil fuels industry to delay action and advance to real solutions and to ultimately evade responsibility. Net zero by design allows sustained pollution from entities and accommodates compensation for increased emission. To the polluters, emissions are reduced to figures which can be gauged, added from one place, and subtracted from another. This equation is simple in model but deeply unpatriotic and unrealistic in projections.  The net zero is too vague to mean anything, it disguises the intent to ramp up emissions intensive productions and allow corporations to project major growth of high emissions products almost unchecked.

This unrealistic plan relies primarily on mechanisms that negates science and logic. The absence of data and informed research summarises the shallowness of net zero and how no serious country should take it seriously. The plans including carbon offsetting, futuristic, unproven, and dangerous geoengineering technologies such as Bioenergy with Carbon Capture and Storage (BECCS) and Direct Air Capture (DAC) that will not work at any scale, and can only guarantee great harm to communities, ecosystems, and biodiversity. Net zero will only deliver profit over people and attract dangerous finance at the detriment of the adversely impacted communities and persons.

It is disturbing that polluting corporations now have an easy sweep on the Government and boldly suggest policy direction including the net zero agenda and other false solutions that now compete for space in the country’s NDCs. The hold the industry has was exposed in Poland during COP24 when an oil executive of Shell boasted that the industry practically wrote the Paris Agreement. Now with Net Zero, they lure governments, including our own to advance this position during international discourse.

On climate decisions, Nigeria appears confused. Her Economic Recovery and Growth Plan (ERGP) proposing to increase oil production and use the country’s vast oil and natural gas resources to catalyse economic recovery contradicts the provisions of the country’s NDCs which provides for reduction in oil and gas production, gas flaring and greenhouse gas emission by 2030. It is equally in variance with negates the government demand for fair access to net zero.

ALSO READ:  Climate change can pose danger to Nigeria, if not tackled – ICEED

Nigerians in the 28 states and the Federal Capital Territory (FCT) who are at risk of climate impacts including the now regular consequences of massive flooding predicted by the Nigeria Hydrological Services Agency (NIHSA) deserve better policy direction and interventions from government.

The people of the Niger Delta who live side by side gas flares deserve a clearer and more patriotic position from government.  People in northern Nigeria experiencing desert encroachment and forced migration because of unproductive lands and insecurity must be brought into the equation in the climate change discourse and the energy mix Nigeria must adopt.  Indeed, the spiraling conflict between herdsmen and farmers in northern Nigeria is not unconnected to the mass migration from unproductive lands to the greener middle belt. Unchecked, forceful march down the south also experiencing coastal erosion will continue, leading to the destruction of farmlands and livelihood. This must stop!

Informed nations are advancing real solutions. Nigeria will need deliberate political will to project safe and reliable renewable alternatives, and challenge industry’s age long and potentially dangerous obstruction and manipulation. Nigerians are waiting for the Government to adopt and implement tested recommendations like the liability roadmap, a document that details the obligations of stakeholder’s state and non-state actors at different levels (international, national, and local).

The liability roadmap encompasses the wisdom of frontline communities and accommodates the actual concerns of Nigerians. Nigerian leaders must also listen to the people and prioritize people’s lives and the planet over and above profit. Useful recommendations on the way forward for Nigeria and indeed the entire African governments attending the COP in Glasgow have been made by climate justice CSOs in Africa in a joint statement released on November 1, 2021.

They urge African governments to:

For Nigeria to de-escalate boiling tensions, prevent social unrest and minimize threatening planetary alteration, it must heed the calls of her people and pursue policies that promotes just and equitable transition from fossil fuels and its many unfounded remedial claims, and instead advance real solutions that prioritize life and human dignity. 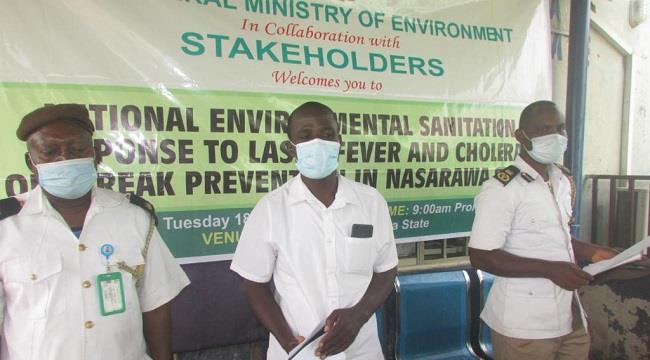 The Federal Ministry of Environment has strengthened activities on environmental health and sanitation response to ...