Seven Greenpeace activists on Sunday, November 30, 2014 projected the message “Act for the climate! Go solar!” onto the hill of Wayna Picchu to mark the beginning of the end of coal- and oil-driven economies. As the UN climate summit gets underway in Lima, Greenpeace is asking decision-makers attending the 20th session of Conference of the Parties (COP 20) to adopt a new course and lead us to 100% renewable energy for all by 2050. 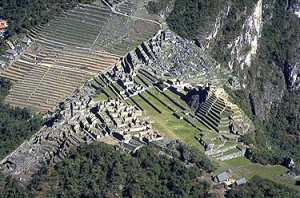 The activists, from Brazil, Argentina, Chile, Spain, Austria and Germany, climbed 3,000 steep steps along the trail to Machu Picchu in the early hours of Sunday morning under foggy weather conditions. The message was projected in the following six languages: English, Spanish, Portuguese, German, French and Hindi.

Greenpeace Head of Climate Politics Martin Kaiser said: “The Temple of the Sun in Machu Picchu is where we are announcing to the world that, as the power of the sun is our past, it is also our future. We urge summit attendees to commit to the world’s largest source of energy – the sun – to solve our global climate crisis. The US and China’s recent announcement is a turning point and must spur a global commitment to the ambitious goal of 100% renewable energy for everyone. At COP 20, we call on major emitter countries in particular to table bold commitments for 2025. The whole world is watching – now is the time to act.”

The climate summit convenes ministers of 194 countries for the annual Conference of the Parties to negotiate for the next 12 days the legally binding text that will become next year’s Paris Protocol. It will provide an early insight into what we may expect from the agreement with regard to the long-term phase-out of coal-fired power plants, the rate of deployment of renewable energies, and the financial and technological support for the vulnerable and least developed countries.

By March 2015, each country must have tabled their national climate targets. Greenpeace believes all countries should present concrete commitments for 2025 to accelerate the transformation towards 100% renewable energy by 2050. These commitments need to be improved every five years to ensure both political accountability and technological development.

Greenpeace Climate and Energy campaigner Mauro Fernandez said: “As the hosts of this year’s climate summit, Latin Americans want to share with the world our first-hand experience with the severe impacts of climate change.  The global community is awakening and bold action is needed to solve the root cause of our climate crisis. We can no longer delay the transition from fossil fuels to renewable energy systems. In particular, it’s essential that Brazil – as the largest economy in the region – commits to ending deforestation by 2020 and significantly reducing its emissions towards 2025. It’s essential that the negotiations in Lima propel us toward a major international agreement in Paris next year.”