Companies to get $48m SIDA facility for off-grid clean power

A Swedish development agency has released a challenge fund worth $48 million to help over 50 private companies with innovative ideas reach the market with various off-grid power products and clean cooking solutions for poor rural families in seven African countries. 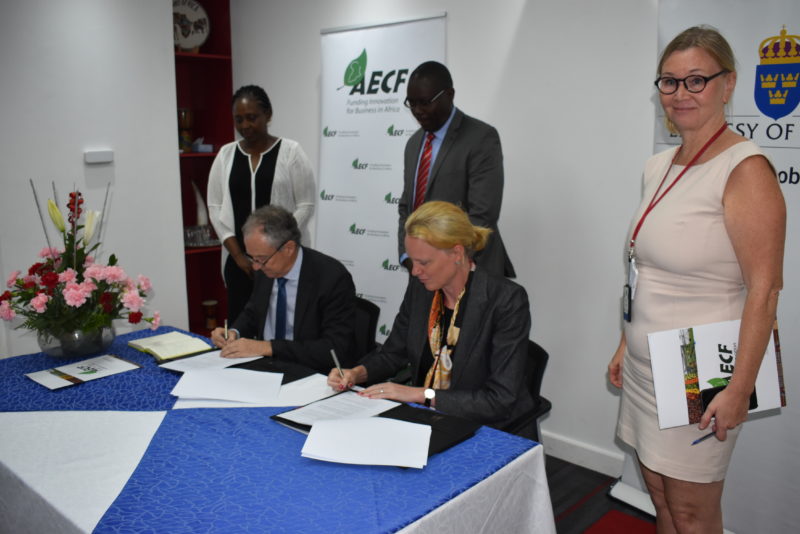 Dr. Paul Greener, CEO, the AECF; and Anna Jardfelt, the Swedish Ambassador, signing the $48 million deal. Looking on are employees of AECF

The Sweden International Development Cooperation Agency (SIDA), on November 30, 2017 signed an agreement with the Africa Enterprise Challenge Fund (AECF), through which companies in target countries will submit their business proposals for vetting, starting from June 2018.

“The idea is that companies supported (by this initiative) are (being) prepared to take risks, which they otherwise would not take,” said Anna Jardfelt, the Swedish Ambassador to Kenya, adding that successful companies must provide at least 50 % of the proposed budget.

The initiative known as Renewable Energy, Adaptation and Climate Change Technology (REACT) will see small and medium size companies receive up to $1.5 million grant each to implement projects that will largely benefit women and children in Burkina Faso, Ethiopia, Kenya, Liberia, Mali, Mozambique and Zimbabwe.

“We hope that the new business models developed in East Africa, providing electricity to millions of people off the national grid, will rapidly be taken up in Liberia and generally in West Africa, promoting learning across the continent,” said Elisabeth Hårleman, the SIDA Head of Development Cooperation – Liberia.

The background to REACT is that around 510 million people, who form 60% of the population in sub-Saharan Africa, do not have access to electricity and are forced to rely on keroseene, fire wood or batteries – solutions that are expensive, unreliable and environmentally unsustainable.

According to Victor Ndiege, the Portfolio Manager for REACT, it is evident that the population without electricity will increase steadily until at least 2025.  “To worsen the scenario is the high cost of grid extension to remote areas of the continent,” he said.

Studies have shown that African households and small businesses spend over $17 billion on lighting, mainly kerosene, with many households spending up to 30 percent of their disposable income on fuel purchase.

Studies have further demonstrated that wood and charcoal make up about 90 percent of the primary energy supply in sub-Saharan Africa, presenting environmental and livelihood challenges as nearly four million hectares of forest are lost each year, adding to the degradation of water catchments and soil erosion.

According to AECF, innovation to improve market access for the poor in sub-Saharan Africa is hampered by a wide range of challenges amongst them: a poor investment climate, lack of competitive pressure for businesses to innovate; pervasive market failures and a lack of information on the needs of the poor; and uncertainty over the commercial returns to pro-poor innovation.

The AECF and Sida will therefore work with private sector companies to improve market systems and facilitate the impactful exchange of quality renewable energy products in rural areas within the target countries.

Overall, the funding challenge, which is also open to companies based elsewhere but are willing to invest in target countries, is expected to stimulate impactful benefits to over 300,000 households in the region.

The support is part of Sweden’s special efforts to promote renewable energy and energy efficiency in sub-Saharan Africa and its commitment to mobilise $1 billion over the next 10 years as per the Paris Agreement on Climate Change and Sustainable Development Goals (SDGs).