Communities directly impacted by Shell’s alleged abusive practices on Tuesday, December 11, 2018 spoke out as fossil-fuel trade association IETA hosted representatives from the Big Polluter for an event at the U.N. Framework Convention on Climate Change’s 24th conference of the parties (COP24) holding in Katowice, Poland. The side event held just days after a Shell executive was said to bragged about the corporation’s influence over the Paris Agreement. 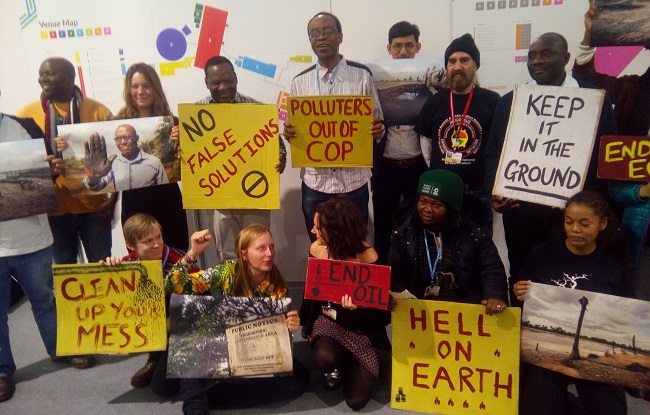 The activists confronting Shell at the COP

Shell is believed to be one of the world’s largest polluters and is said to have a long track record of obstructing climate policymaking. In 2013, Shell was found guilty of environmental crimes in the Niger Delta, Nigeria.

“We have a message for Shell and companies that pretend the solution to the climate catastrophe doesn’t demand the end of fossil fuels. To the Shell executives who got rich from the suffering of the Ogoni people and communities living on the frontlines of dirty energy and climate change impacts we say: You are the last gasp of a system on the way out. You are on the wrong side of history. We will not rest until you stop extracting fossil fuels and pay for the damage you have caused,” stated Sara Shaw of the Friends of the Earth International.

Nnimmo Bassey of the Health of Mother Earth Foundation said: “Yesterday, the world celebrated 70th anniversary of the Universal Declaration of Human Rights. In the Niger Delta we have endured 60 years of gross oil pollution, gas flares and human rights abuses. Today, the world has 12 years to right the wrongs. Shell and their cohorts must be kicked out of the COP and held to account.”

Godwin Ojo, Environmental Rights Action/Friends of the Earth Nigeria: “We must kick Big Polluters out of the talks. Big Polluters are writing the script behind the scene and this side event is an evidence. We need to kick them out of the COP process.”

Alberto Saldamando, Indigenous Environmental Network and It Takes Roots delegation: “This is so transparent – everything we’ve been saying about the role the market mechanisms are playing, is possible to see right here. It is a false solution. A loophole for dirty energy corporations to continuing polluting, through offset mechs these corporations are continuing to pollute and devastate environmental justice communities.

Sriram Madhusoodanan, Corporate Accountability: “Second thing is that the majority of forests that are offset are on indigenous lands – in this form REDD+ and other kinds of offset mechanisms are fueling land grabs and massive violations of human rights in the global south. We must reject their presence and influence here.

“This is precisely why the UNFCCC needs a conflict-of-interest policy. The only thing Shell Oil should be contributing at these talks is a commitment to remunerate countries for the devastation its decades of climate deception and carbon extraction have caused. Instead, it’s using every tool at its disposal to convince governments here to advance its dangerous schemes. Shell is savvier in advocating its agenda, to be certain, than the Trump Administration in its oxymoronic sideshow for ‘clean fossil fuels.’

“But its intention is similar: To greenwash and otherwise obfuscate its role in writing a Paris roadmap written by and for the world’s biggest polluters. But media, negotiators, and civil society won’t be duped: The growing movement – represented by the People’s Demands for Climate Justice – calling to keep fossil fuels in the ground and kick Big Polluters like Shell out of climate policy is determined to ensure the Paris Rulebook advances true climate justice.”

Collin Rees, Oil Change International: “For decades, Shell has violated human rights and devastated communities around the globe. It’s done this while wrecking the climate and doing everything it can to lock in decades’ more extraction of dirty fossil fuels and profits for its executives. Canada should be ashamed for lending credibility to today’s panel and legitimising Shell’s presence at the UN. It’s time for governments to reject false solutions like Shell’s Sky Scenario, kick Shell out of the climate talks, and stand with the frontline communities most impacted by Shell’s greed.”

Rita Uwaka, Environmental Rights Action/Friends of the Earth Nigeria: “Shell is a big-time polluter playing saint at the COP. Their track record of environmental degradation and human rights abuses have continued to affect communities in the Niger Delta with differentiated impacts on women and vulnerable groups. Having Shell organising a side event at this COP to promote false solutions is not only a slap on our faces and impacted communities in the frontline, it is a sacrilege on Mother Earth. If we must make progress with the climate talks, Shell should be kicked out of COP. We demand Climate Justice for all.”

Earlier in the day, the People’s Demands, a set of six calls to governments, were delivered to the UNFCCC Executive Secretariat. Over 300 organisations from over 129 countries support the demands, which include a call for an end to corporate capture.

According to the activists, countries have failed to make substantive progress at this year’s talks, and corporate capture of the climate negotiations has become a contentious issue. They disclosed that the conference is bankrolled by some of the largest oil, coal, and gas corporations in the European Union, “which raises questions about the level of access and influence fossil fuel corporations have at the talks”.