African Voices, a permanent exhibition that examines the diversity, dynamism, and global influence of Africa’s peoples and cultures has profiled Dr Newton Jibunoh, a trailblazing explorer, environmentalist and historian, who has dedicated his life to curbing the scourge of poverty caused by desertification.

Environmentalist Newton Jibunoh is one of Nigeria’s renowned explorers. He witnessed extreme drought and famine on solo expeditions across the Sahara Desert and has been committed to finding solutions to desertification, a phenomenon where fertile land becomes desert. He has travelled the world to find solutions and set up a pilot project in the desert area of northern Nigeria. The interview was aired on the international news channel.

Dr Jibunoh in an interview with Vladimir Duthier, CNN Nigeria Correspondent, recounts his experience on his expeditions across the Sahara Desert and his efforts in curbing the scourge of poverty caused by desertification.. He has adopted the Fade Initiative (Fight Against Desert Encroachment) and also started a pilot project in the desert area of northern Nigeria outside Kano state.

“We found out that most of the initiatives that we developed to combat the encroachment of the desert will take somewhere to 30-40 possible 50 years to realise, especially if you want to bring some kind of a sanity to the whole arrangement of combating desertification,” he explained.

His partnership with Lagos and Kano state governments is as a result of his perceived need to start bringing in the younger generation that will bring about some kind of continuity to take this project to the next generation.

Jibunoh, is a PhD holder from the Nnamdi Azikiwe Universty in Awka and University of Benin, he has successfully driven across the Sahara Desert three times. His background is in Engineering with a specialisation in Soil Mechanics.

He worked for the Costain Group where he rose to Chairman/CEO, a position he held for 16 years. He is a Fellow of the Nigerian institute of Builders (NIOB), with over 35 years’ experience in the building and construction industry.

He has also acquired over 40 years of relevant experience in the environment, where he has carried out various research themed visits and survey works on desertification and went on a study tour to the Cold and Arid Regions Environment and Engineering Research Institute in China.

He was also part of a team that was sponsored by the United States Consular Office in Abuja for a two-week course at the University of Arizona. He is a member of the Federal Government’s delegate to Climate Change Conferences and has taken part in conferences held in Bangkok (Thailand), Copenhagen (Denmark) and more recently Cancun (Mexico).

An Emeritus Ambassador of Environment for Lagos State, some of his research work and findings have been documented in his books, “Me, My Desert and I” and “Bridging The Sahara Desert”.

Previous: Ogoni and the agony of a delayed clean up
Next: Journalists to train on mapping environmental issues 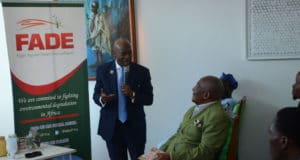 GMOs: Is Nigeria ready to kill another environmentalist?