Stability is at the core of central banks’ objectives. To assess climate destabilisation risks, major central banks, and supervisors plan to utilise climate scenarios developed by a team of researchers led by the Potsdam Institute for Climate Impact Research.

These scenarios will inform the climate stress tests that central banks like the Bank of England or the Banque de France are planning to apply to the financial institutions they regulate. The work was commissioned by the “Network of Central Banks and Supervisors for Greening the Financial System” (NGFS), a group of 66 central banks and supervisors around the globe which aims to develop climate risk management in the financial sector.

“Climate-related risks are very real to the global economy,” Elmar Kriegler, lead coordinator of the project at the Potsdam Institute for Climate Impact Research (PIK), explains.

“On the one hand, the physical impacts of climate and weather-related events can be exceptionally large – think of floods or droughts. On the other hand, there are transitional risks and opportunities. These arise for example from policy changes or technological developments in the process of adjustment towards a low-carbon economy. Both risk types can heavily impact economies across the globe. But how precisely and under what conditions, that is what our scenarios shall help to illustrate and explore,” Kriegler adds.

This is considered a critical information for assessing economic and financial risks.

“As central banks and supervisors it is our job to understand the impact of climate change on the economy and on the financial system in a variety of possible future scenarios,” Sarah Breeden, Executive Director of UK Deposit Takers Supervision at Bank of England and Chair of the NGFS “macro-financial” workstream, stated.

“That’s why I am thrilled that today the NGFS is publishing these scenarios. They are an important addition to our analytical toolkit. By helping identify the actions that we can take now to reduce future costs and risks, we can make a real difference.”

ALSO READ:  CDM: How Nigeria can rake in N86b yearly

In its first comprehensive report from April 2019, the NGFS issued six recommendations on how central banks and policy makers can ensure the financial system is resilient to climate-related risks. One of those recommendations was to develop scenarios as a common starting point for analysing climate risks to the economy and financial system.

The first round of scenarios has now been published. A second one will follow around the turn of the year. The research is conducted by the Potsdam Institute, the International Institute for Applied Systems Analysis (IIASA), Climate Analytics, the University of Maryland, and ETH Zurich in close collaboration with the NGFS.

“To facilitate financial specialists to work with the scenario data, we use IIASA’s Scenario Explorer,” Bas van Ruijven, senior research scholar at IIASA, explains. “Through this website, users can create their own graphics and workspaces of any aspects of these transition scenarios, such as macro-economic development, changes in energy consumption, or the exploitation of energy resources. Users can also download the full dataset, or just those parts of the data that they need to work with.”

“Science-based information is critical for sound decision making. During the project, we experienced mutual learning between scenario modellers and central bankers,” Elmar Kriegler concludes. “It was thrilling to see that climate change scenarios proved their worth for financial regulators as they have done before for climate policy makers.” 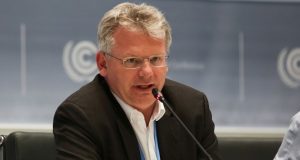