January 6, 2017 Comments Off on Climate change can cause coral bleaching, says study 2,704 Views

If current trends continue and the world fails to reduce greenhouse gas emissions, nearly all of the world’s coral reefs will suffer severe bleaching – the gravest threat to one of the Earth’s most important ecosystems – on annual basis, the United Nations Environment Programme (UNEP) has said Climate Change. 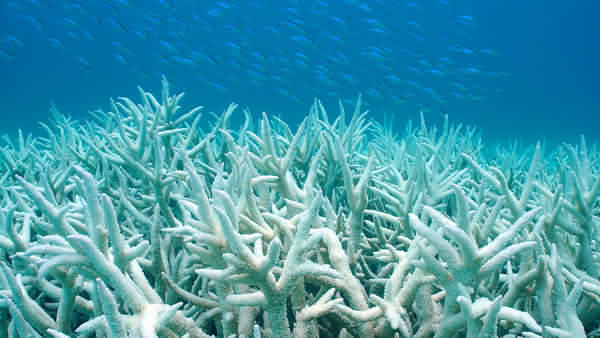 The finding is part of a study funded by UNEP and partners, which reviewed new climate change projections to predict which corals will be affected first and at what rate. The report is published in the journal Nature Scientific Reports.

When water is too warm, corals will expel the algae (zooxanthellae) living in their tissues causing the coral to bleach, or turn completely white. This is called coral bleaching.

Researchers found that the reefs in Taiwan and the Turks and Caicos archipelago will be among the first to experience annual bleaching, followed by reefs off the coast of Bahrain, in Chile and in French Polynesia.

Calling the predictions “a treasure trove” for environmentalists, the head of UNEP, Erik Solheim, said the projects allow conservationists and governments to prioritise the protection reef protection.

“The projections show us where we still have time to act before it’s too late,” Mr. Solheim said.

On average, the reefs will start to undergo annual bleaching starting in 2014, according to the study. Without the required minimum of five years to regenerate, the annual occurrences will have a deadly effect on the corals and disrupt the ecosystems which they support.

However, if Governments act on emission reduction pledges made in the Paris Agreement, which calls on countries to combat climate change and limit global temperature rise to below 2 degrees Celsius, the corals would have another 11 years to adapt to the warming seas.

Between 2014 and 2016, the world witnessed the longest global bleaching event recorded. Among the casualties was the Great Barrier Reef, with 90 per cent of it bleached and 20 per cent of the reef’s coral killed.