The Centre for Climate Change Communication in the George Mason University, USA on Monday, December 11, 2017 announced the publication of a new article titled: “Scientific agreement can neutralise the politicisation of facts” in the journal Nature Human Behaviour.

Several recent studies have found that the more education conservatives have, the less likely they are to accept scientific findings about climate change, suggesting a motivated reasoning effect. This has led to the concern that attempts to increase public knowledge might exacerbate political polarisation on the issue. Yet, most prior studies have been correlational, which leaves the most important question unanswered: Does communicating climate change facts cause issue polarisation?

The centre sought to answer the question with a large nationally representative experiment involving 6,301 Americans.

The centre disclosed in a statement: “Consistent with the motivated reasoning account, before we provided respondents with any information, we found evidence that higher educated conservatives were more likely than higher educated liberals to underestimate the scientific consensus on climate change. However, as part of a randomised experiment, we exposed half of the sample to a simple scientific fact – ‘97% of climate scientists have concluded that human-caused global warming is happening’.

The findings are visualised in the figure below: 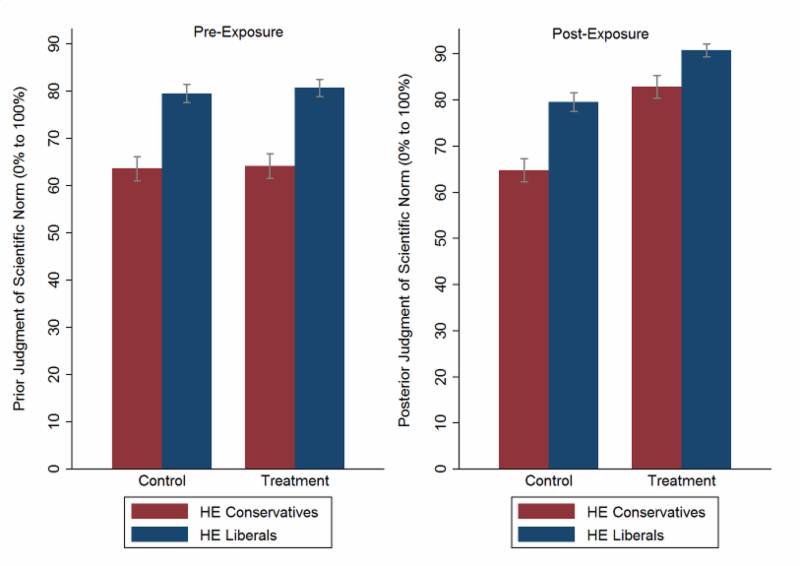 “These findings proved robust across ideology and education levels and build on our prior work illustrating that perceived scientific consensus acts as a ‘gateway’ to other key beliefs about climate change.”