Scientists for the first time observed the bears feasting on white-beaked dolphins in Svalbard in the Norwegian Arctic. They theorise the dolphins, coaxed northward by warmer waters, were trapped under the ice and killed by the bears when coming up for air through a small hole, they wrote in a new study. 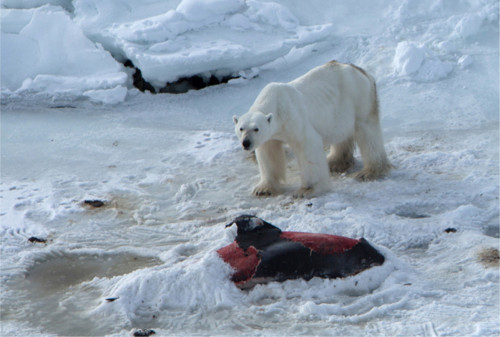 A polar bear with the remains of a white-beaked dolphin covered up with snow. Source: Polar Research via Bloomberg

“This is the first record of this species as polar bear prey,” the authors led by the Norwegian Polar Institute’s Jon Aars said in the paper published this month in the Polar Research journal. “The warming of the Arctic is significantly changing the ecosystem and relations between species.”

Climate change is rendering increasing areas of the Arctic ice-free during summer months. While the dolphins often visit Svalbard in warmer months, they haven’t been reported that far north in early spring. The researchers observed seven more dolphin carcasses near the area in the following months.

One of the bears was so skinny his ribs were visible through the fur, they said. After the bear had eaten one dolphin, it covered up another with snow to save for later.

As the Arctic warms amid changing climate and ice sheets thin, dolphins could become a more regular meal. For the bears, that’s good news as access to their more usual food supply, seals, may further decline because of the milder weather.