Wheat, maize, and rice yields, particularly in northern climates, are projected to fall as insects in temperate regions thrive in a warmer climate, a new research has shown. 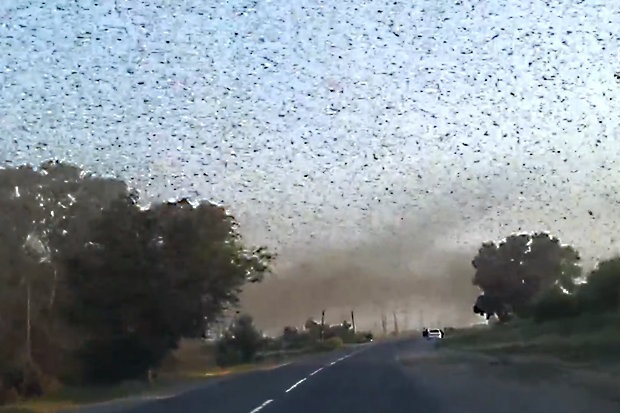 Swarm of locusts in the sky above Russia. Photo credit: Daily Star

The study, which was published on Friday, August 31, 2018 in the journal Science, models increases in insect populations and their metabolic rates in a warmer world, and projects a 50 to 100 percent increase in pest-induced crop losses in European wheat, and 30 to 40 percent increases in north American maize, even if countries meet their existing commitments to reduce greenhouse gas emissions.

“In some temperate countries, insect pest damage to crops is projected to rise sharply as temperatures continue to climb, putting serious pressure on grain producers,” said Joshua Tewksbury, co-lead author of the research and a director of Future Earth, an international research network for global sustainability.

Future bugs, however, in a warmer climate are expected to be even hungrier and more numerous. Warmer temperatures have been shown to accelerate an individual insect’s metabolic rate, leading it to consume more food during its lifespan. And while pest populations may decline in some hotter tropical areas, they are expected to increase elsewhere as temperatures rise and additional ecosystems become favorable to the insects.

The study finds that Europe’s bread basket could be among the hardest hit. Currently the most productive wheat producing region in the world, pest impacts on European wheat could create a total annual pest-induced yield loss that could top 16 million tons. Eleven European countries are predicted to see 75 percent or higher increases in insect-induced wheat losses, including the U.K., Denmark, Sweden and Ireland.

The study recommends changes to global agricultural practices, including increased selection for heat- and pest-resistant crops and new crop rotation patterns to reduce vulnerability to insects. In some extreme cases, greater pesticide use may become necessary to secure regional food supplies, even at the cost of possible associated health and environmental damage.

Like Loading...
2018-09-02
admin
Previous: WHO collaborates with government, Lagos to address TB scourge
Next: Kenya, World Bank to partner on affordable homes