Climate change has become a new reality and a worldwide phenomenon but a second look at the topic suggests that Nigeria may be immune from it.

In effect, climate change will mean a change in such weather condition for a particular location over time. 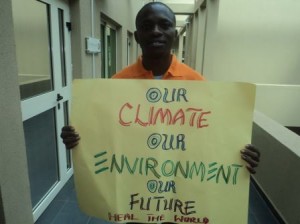 Impact as used may be negative or positive or a combination. A literal definition of climate states that a significant time variation in weather patterns occurring over periods ranging from decades to millions of years and area such as Nigeria over a period of time.

What therefore is climate change; can Nigeria be affected; what impact has it on Nigeria? How can we mitigate the negative impact and ensure that climate change/global warming does not have disastrous consequence on Nigeria?

Giving answers to these questions are at best guesstimate as no one can be definitive about them, but we still need to start thinking about them today to find answers to tomorrow’s challenges.

What then is climate change? This can be looked at as the continuing change of the earth’s climate, which, in time past, was seen to be caused by natural causes.

However, the term ‘climate change’ today is generally used when referring to the change in our climate which has been observed since the early part of the 20th century.

The changes which are seen over recent years and those which are predicted over the next century are thought to be mainly due to human behavior rather than due to natural changes in the atmosphere.

What causes this change cannot be treated in isolation without looking at greenhouse effect which is caused by the release of destructive gases by human action which in turn brings about the warming of the earth surface by increase in the earth’s temperature.

The increase in temperature in turn causes the melting of ice which contributes to the rise in sea level among other disastrous consequences.

Arising from this, is the question: “Climate Change in Nigeria: Any Impact?” In this regard an example may suffice.

According to the report complied in 2010, investigations revealed that over 200 people were killed by meningitis in Nigeria and Niger Republic in one week. There were outbreaks in 76 areas. There were 25,000 suspected cases and 1, 500 deaths in the first quarter of 2009. Although meningitis is a disease caused by an infection of the meanings, which is the thin lining that surrounds the brain and the spinal cord, experts have found a correlation between the weather and this disease. It is generally known that the disease attacks more people during the dry season because of dust, wind and cold nights. There were indications in the past one month that many people were treated for acute pneumonia in some hospitals as a result of the erratic and unpredictable weather which has also confused farmers about planting seasons raising fear about food production and security.

Apart from the reign of diseases as a result of harsh weather conditions in Northern Nigeria agriculture has been affected as a result of erratic weather patterns. The dryness has led to dry waterbeds and movement of people and their pasture to the southern regions thus causing tension and conflicts between the original inhabitants and the new comers. Experts at the United Nations and other global bodies have found over the years that the world’s climate has changed.

The drought of the 1970s that swept most of the Sahel region of Africa left the region, including Nigeria, with general water resources issues. The consequence of that are the low agricultural output, limited water supply and inadequate water reserve for power generation which the region is associated with.

Again the increasing flooding in the coastal and non-coastal regions of the country is indicative of the expected effect of climate change.

There are two extremes of the expected challenges of the climate change in Nigeria, viz, increase in rainy and dry seasons with each lasting approximately six months on the average, that is, April to October and October to March, respectively.

Nigeria daily temperature average differs according to location and period of the year. Average temperature ranges from 25oC in the southern coast to 40oC in the north.

A rise in temperature of between 1.4oC to 5.8oC by 2100 according to Intergovernmental Panel on Climate Change (IPCC) will have serious negative effect on the socio-economic wellbeing of the country in the following ways:

I will stop by saying if we don’t put all this in mind, then what will our future be?

According to Nigerian environmental activist, Nnimmo Bassey: “Climate change in Nigeria is a ticking time bomb and it exists little or even nothing to mitigate its effects.”

Previous: EBOLA IN NIGERIA
Next: IPCC’s AR5: Adaptation is fundamentally about risk management 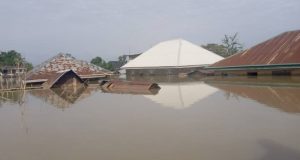