The increase of devastating weather extremes in summer is likely linked to human-made climate change, mounting evidence shows. Giant airstreams are circling the Earth, waving up and down between the Arctic and the tropics. These planetary waves transport heat and moisture. When these planetary waves stall, droughts or floods can occur. Warming caused by greenhouse-gases from fossil fuels creates favorable conditions for such events, an international team of scientists now finds. 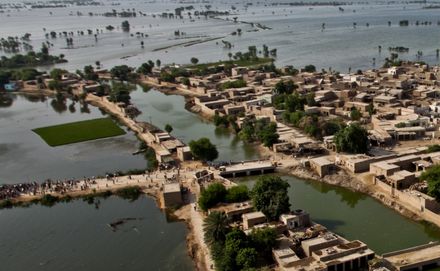 “The unprecedented 2016 California drought, the 2011 U.S. heatwave and 2010 Pakistan flood as well as the 2003 European hot spell all belong to a most worrying series of extremes,” says Michael Mann from the Pennsylvania State University in the U.S., lead-author of the study published in Scientific Reports. “The increased incidence of these events exceeds what we would expect from the direct effects of global warming alone, so there must be an additional climate change effect. In data from computer simulations as well as observations, we identify changes that favor unusually persistent, extreme meanders of the jet stream that support such extreme weather events. Human activity has been suspected of contributing to this pattern before, but now we uncover a clear fingerprint of human activity.”

How sunny days can turn into a serious heat wave

“If the same weather persists for weeks on end in one region, then sunny days can turn into a serious heat wave and drought, or lasting rains can lead to flooding”, explains co-author Stefan Rahmstorf from the Potsdam Institute for Climate Impact Research (PIK) in Germany. “This occurs under specific conditions that favor what we call a quasi-resonant amplification that makes the north-south undulations of the jet stream grow very large. It also makes theses waves grind to a halt rather than moving from west to east. Identifying the human fingerprint on this process is advanced forensics.”

ALSO READ:  Paris Agreement: Our fate is in our hands - Naoko Ishii

Air movements are largely driven by temperature differences between the Equator and the Poles. Since the Arctic is more rapidly warming than other regions, this temperature difference is decreasing. Also, land masses are warming more rapidly than the oceans, especially in summer. Both changes have an impact on those global air movements. This includes the giant airstreams that are called planetary waves because they circle Earth’s Northern hemisphere in huge turns between the tropics and the Arctic. The scientists detected a specific surface temperature distribution apparent during the episodes when the planetary waves eastward movement has been stalling, as seen in satellite data.

Using temperature measurements since 1870 to confirm findings in satellite data

”Good satellite data exists only for a relatively short time – too short to robustly conclude how the stalling events have been changing over time. In contrast, high-quality temperature measurements are available since the 1870s, so we use this to reconstruct the changes over time,” says co-author Kai Kornhuber, also from PIK. “We looked into dozens of different climate models – computer simulations called CMIP5 of this past period – as well as into observation data, and it turns out that the temperature distribution favoring planetary wave airstream stalling increased in almost 70 percent of the simulations.”

Interestingly, most of the effect occured in the past four decades. “The more frequent persistent and meandering Jetstream states seems to be a relatively recent phenomenon, which makes it even more relevant,” says co-author Dim Coumou from the Department of Water and Climate Risk at VU University in Amsterdam (Netherlands). “We certainly need to further investigate this – there is some good evidence, but also many open questions. In any case, such non-linear responses of the Earth system to human-made warming should be avoided. We can limit the risks associated with  increases in weather extremes if we limit greenhouse-gas emissions.”

Previous: Cities move to cut air pollution from cars
Next: Vicious circle of drought, forest loss in the Amazon