There appears to be confusion regarding the actual employers of the 300 street sweepers’ supervisors that were recently sacked in Lagos State. 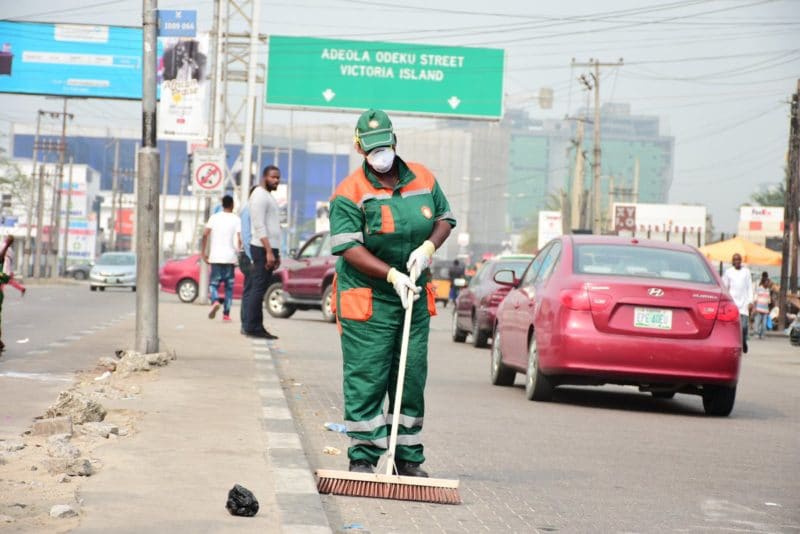 A street sweeper in Lagos

Environmental utility firm, Visionscape Sanitation Solutions Ltd (VSS), told the News Agency of Nigeria (NAN) on Sunday, June 17, 2018 in Lagos that the supervisors were employed for the Lagos State Government, under the Cleaner Lagos Initiative (CLI).

Mr Adebola Shabi, the Special Adviser to the Governor on CLI, said the government had nothing to do with the news making the rounds that it had sacked the 300 supervisors.

“Maybe it is Visionscape that sacked them; Cleaner Lagos has not sacked anybody.

“SSML is a consultant to the state government on engagement of sweepers but we have told them that, at the end of June, all sweepers should be handed over to the Ministry of Environment.

“We don’t know any issue about the sack; I have been trying to get the information from Visionscape and they are directing me to their head office.

“The sack has nothing to do with Cleaner Lagos because we did not employ and we did not sack. Lagos State does not believe in sacking people,’’ he said.

The Head, Corporate Communications, VisionScape, Mrs Motunrayo Elias, told NAN that the company was not the only contractor under the CLI.

Elias said that when the structure for waste management was put in place, government said it wanted street sweepers to clean the inner streets, among other arrangements.

She said that the structure for street sweepers’ supervisors was also put in place, that was the arrangement between CLI, VSS and SSML, which was the company managing the street sweepers.

Elias said that the supervisors were hired by SSML but were trained by VSS and worked with VSS Area Managers, to ensure the synergy of sweeping and packing the refuse.

“Now, with the controversy about PSP operators wanting to go back to work, government said that the street sweepers should revert to them.

“So if you have taken the street sweepers, what are you going to do with their supervisors?

“When we had a meeting, the issue was brought up and government asked how much was the salary. That was where the problem started.

“So the company paid the supervisors their disengagement bonuses, with Visionscape paying them two months’ salaries, while government was trying to decide.

“For fact, the supervisors were supposed to be transferred to the Ministry of Environment. It was a labour contract from the CLI,’’ she said.

Elias said that the structure that was put in place for waste management in the state injected income to the economy, as people were better off.

She said that it was essential to take the good with the bad, as nobody talked about the good that the whole system was doing when it was creating employment.

NAN reports that the disengagement letters to the supervisors were signed by the Head, Human Resources and Administration, SSML, Oluwatoyin Ayoola.

The letter reads: ‘“In light of the recent review of the implementation of the Cleaner Lagos Initiative and the impact of these changes on our operational requirements as discussed at our meeting held on the 2nd of June 2018, we regrettably write to inform you that it affects your employment with Standard Street Manpower Ltd.

“As discussed, the transfer of Ward Level Sanitation Programme (community sanitation workers) to the Lagos State Government has rendered your position as Sanitation Supervisor redundant and your services will no longer be required with effect from 14th of June, 2018.’’