A call to phase out mercury use in dentistry by 2022 in the European Union has been made by health and environmental non-governmental organisations (NGOs). 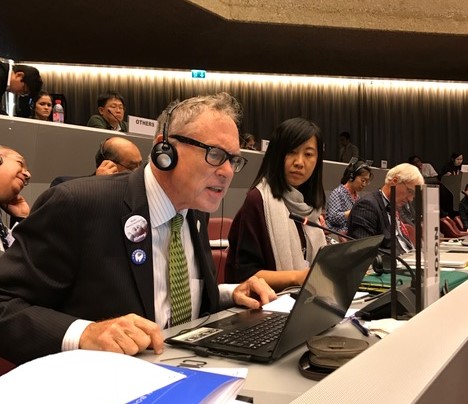 Charlie Brown, President of the World Alliance for Mercury-Free Dentistry

Mercury is currently used in dental amalgam in fillings and is said to be replaceable. Mercury is regarded as a dangerous neurotoxin that can damage the nervous, renal and cardiovascular systems.

Given that dental amalgam is 50 per cent mercury, the Minamata Convention on Mercury requires each participating nation to reduce its use.

In 2017, the European Union adopted an amalgam ban for children under the age of 15 and for pregnant and breastfeeding women from July 2018.  The new rule requires also each Member State to set out a national plan to phasing down amalgam use and requires the European Commission to make a recommendation in 2020 on whether to phase out amalgam entirely.

The call to set a date to end all use in dentistry in the European Union was made as part of the Berlin Declaration to End Amalgam Use in Europe by 2022  at a two-day civil society summit on November 21-22, 2017 in Berlin.

Stefan Eck, German MEP, who shepherded the partial amalgam ban through the European Parliament, praised the Berlin Declaration. “It was important to participate in this summit in Berlin. I will try my best to work with civil societies to accomplish the goal of an amalgam-free dentistry in Europe,” he said.

Elena Lymberidi-Settimo of the European Environmental Bureau (EEB), which hosted the first European conference to end amalgam a decade ago, said: “The Berlin Declaration highlights a 10-year campaign by the EEB to bring mercury-free dentistry to this entire continent. It’s now time Member States roll up their sleeves and pave the way.”

Florian Schulze of IG Umwelt Zahn Medizin, which hosted the Summit and launched a national campaign, said: “Germany can end amalgam sooner, in 2019. Amalgam use is now very low, and dentists are ready for the switch. All we must do is make changes in the insurance system that are fair to dentists and fair to consumers.”

Philippe Vandendaele of Health Care Without Harm-Europe, said: “We co-led the campaign to end mercury in the other two medical devices, thermometers and sphygmomanometers, and now Europe needs to tackle the job on the third one, dental amalgam.”

Dr Silvia Pleschka of Women Engage for a Common Future, said: “The protection enshrined for children, pregnant women and breastfeeding women needs to be extended across the board, in the EU and beyond.”