About three years after it was hit by a devastating cyclone, Vanuatu is yet to recover from the tragedy. 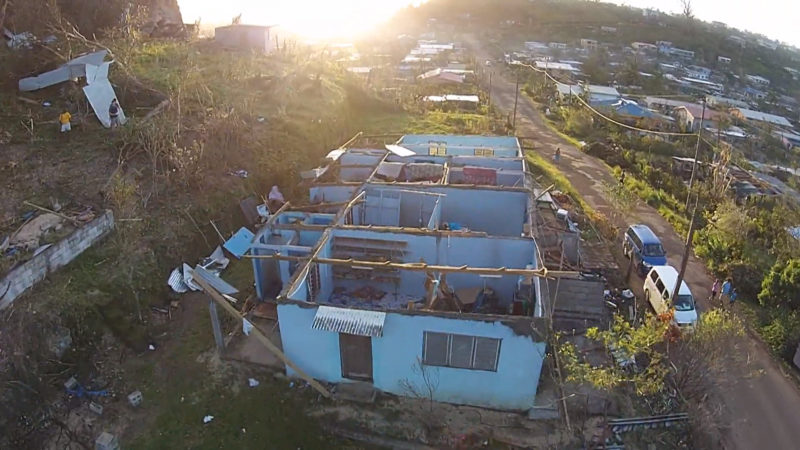 A drone footage of Vanuatu after Cyclone Pam struck

The Commonwealth and Heads of Governments Meeting (CHOGM) that held in London from Monday April 16 to Wednesday, April 18, 2018 should have taken place in Vanuatu. But a Category 5 Tropical Cyclone Pam that hit the South Pacific Ocean nation in 2015 put paid to that ambition.

Ralph Regenvanu, Vanuatu’s Foreign Minister, said: “This CHOGM was supposed to be held in Vanuatu. In March 2015, we experienced Category 5 tropical cyclone Pam and it caused an estimated damage of $450 million. For Vanuatu, classed by the UN as Least Developing Country (LDC), the cost of that cyclone is almost 70% of our GDP. It just meant there was no way we were going to be able to host this meeting. We are still in the process of rehabilitation and recovery.

“For Vanuatu, climate change is very real and it is something we factor into anything we do to try to develop our country.”

Regenvanu was among the five speakers on Monday at a forum courtesy of the Climate Action Network (CAN) that attempted to set expectations from leaders gathered in London for the CHOGM. They stressed the need for the biennial forum to deliver on climate change and oceans.

Regenvanu added: “The integration of climate change, particularly response to disasters, is something we now have to mainstream in all the work we do because it is an ever present reality in everyone’s lives.

“When you are in a situation where you are an LDC and having to spend over 50% of your GDP responding to climate change events like tropical cyclones, sea level rise, change in weather patterns. We have now a cyclone season that is over six months in a year. This year alone, we’ve already had four tropical cyclones.

“The very development of the country, in terms of delivering basic services to people, is challenged by climate change.

“The UN ranks Vanuatu as the number one disaster prone country and we have held this rank for five years. There is only one thing we are champions of in the world and that’s being the champions of disasters.

“We come to CHOGM to tell the developed countries like the United Kingdom, Canada, Australia, New Zealand, the countries of the first world that there needs to be recognition of loss and damage suffered by countries like ourselves. We were contributing 0.001 percent of carbon emissions yet the effects on us are greater than for any country proportionally. It is the result of the industrialization of countries in the West.

“It really needs large economies like the UK to step up.

“It’s past time to take action. We in Vanuatu we are experiencing something that will come to all of us eventually if we don’t stop the current path we are on. We have to restructure our whole economy to be on a disaster footing all year long.”

Philip Williamson stated: “Small changes in ocean temperature can have serious effect weather patterns, marine life, distribution of fisheries, coral bleaching. Warmer temperature means less oxygen for fish and carbon dioxide means ocean acidification. Combined additional effect are occurring in the ocean, whatever we do they will get worse for a while. Now is the time for urgent action.

“I would like to emphasize net zero emissions as the core of the Paris Agreement because that is the commitment to stop putting out greenhouse gases in the atmosphere. It is will take time to have that transition, it not impossible but it is challenging.”

Mohamed Adow: “In the latest climate risk index report released by Germanwatch, it is striking that the top five most impacted countries are all Commonwealth nations including Mozambique, Dominica, Malawi, India, and Vanuatu. So this year 2018 is an important year for making progress towards the full implementation of the Paris Agreement but also more importantly for accelerating climate ambition.

“CHOGM presents a golden opportunity for the group to prove its reputation for climate leadership. This year coincides with a series important international events and processes like Talanoa Dialogue, the IPCC 1.5C report and the Global Climate Action Summit in California in September. CHOGM can support and enhance these international processes by affirming the Paris Agreement and any international; agreement related to climate change.

“CHOGM provides a unique opportunity to show that our leaders are committed to the global fight to tackle climate change and seriously engage in the climate process with commitment and integrity. The breadth of membership and spread of geopolitical experience makes the Commonwealth uniquely placed to tackle humanity’s most pressing existential threat, climate change.”

Camilla Born: “The Commonwealth Heads of Governments Meeting (CHOGM) is particularly interesting because it is largest leaders’ Summit in 2018. This is likely to be the largest leaders’ summit where there is a prominent feature on climate before the United Nations Secretary General Summit in September 2019.

“The other interesting feature about CHOGM is that it is a cooperative forum where small islands and climate vulnerable countries are the majority group. Specifically, 25 of the 53 of the Commonwealth are recognised as small island developing states.

“We see it time and time again that the vulnerable states within the commonwealth being hit by extreme weather and we see collaboration between all commonwealth states to respond to that. So it’s never one country working alone, there is much that countries cooperate on in terms of trade and economic development, which has a climate and clean and modern angle to it but there is a lot of cooperation on the impact side.”

Luke Daunivalu: “Our Presidency team is here in London in the immediate aftermath of two cyclones that have struck Fiji in the space of a few days and caused loss of life and significant economic damage. We recognise that the increasingly regular appearance of these storms is indeed an urgent reminder for us to act and we want to maximise the opportunity here in London to do exactly that.

“COP23 President Prime Minister Frank Bainimarama has come to London to urge commonwealth leaders who represent 2.4 billion of the 7.5 billion people on earth to embrace the Talanoa Dialogue and spearhead the fight for more ambitious climate action. Fiji is using its COP Presidency to press for the most ambitious target of the Paris Agreement, which is to limit the increase global warming to 1.5C above pre-industrial age. This will require net zero emissions of carbon pollution by 2050. The method chosen to reach that objective is Nationally Determined Contributions (NDCs).

“From what we have from the current commitments, they are woefully inadequate. With the current commitments, we are committing ourselves to a world in which the average global temperature is 3C degrees higher by century’s end. We are asking the Commonwealth nations to support us through the process of the Talanoa Dialogue, in our effort to increase collective ambition of NDCs and put the world on a new course.”